Even with 5G, DT shows there is still not much growth in telecom

Capital markets days at Deutsche Telekom used to be full of talk about "growth areas" that were supposed to deliver billions of euros in revenues from new opportunities but never did. These days, realism has kicked in and the fantasy genre is out. The German operator's latest target is for sales growth of just 1% to 2% between 2020 and 2024. Outside the lucrative US market, where its spending priorities now lie, the increase will be even smaller, it says.

The upside is an encouraging outlook for profitability, with Deutsche Telekom predicting that its basic earnings will grow by 3% to 5% over this period. It is emboldened by its current form  minus the US business, earnings for the recent first quarter rose 5% on sales growth of just 1%  and aims to slash non-US costs by another 1.2 billion (US$1.5 billion). 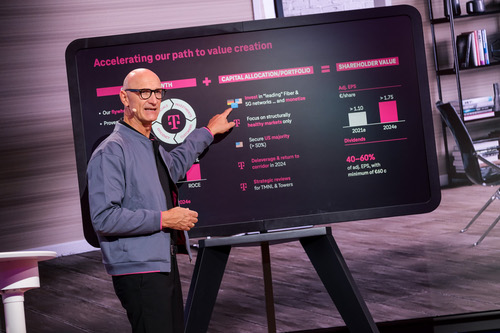 Deutsche Telekom CEO Timotheus Höttges is a big US spender.

That seems viable. Deutsche Telekom has already realized non-US cost savings of 1.4 billion in recent years. It has finished a transition to all-Internet Protocol technology, allowing it to shut down older platforms, and has been able to automate some internal processes. Staff numbers are dropping. Outside the US, they have fallen by nearly 24,000 since 2015, to about 151,000. In Germany, it expects to cut office space by 50%.

But the sales forecast is not inspiring. By 2024, the 5G technology that has garnered so much attention will be more than five years old and widely available. Deutsche Telekom will have spent billions on spectrum licenses and network deployment for marginal growth in revenues. It also plans hefty investments in fiber to reach 60% of properties by 2030, up from only 5% today. Over the next few years, that rollout is evidently not expected to have much impact on sales.

None of this will surprise shareholders, which explains why there was neither disappointment nor glee following the update. The market's reaction was to send Deutsche Telekom's share price up 2.5% in Germany, a warm reception for a solid plan that lacked dazzle. It would probably have been worse if Deutsche Telekom had sacrificed short-term profitability to spend even more, hoping for a future payoff. When Vodafone said it would do that on May 18, its share price fell 9%.

Realistically, the only opportunities for telecom sales growth lie outside Europe. Most European markets are too small and too crowded with competitors to enthuse investors. And no major European operator has made a successful leap outside the core telecom business. For that reason, Deutsche Telekom is mainly interested in the US. This year alone, it expects to invest 10.3 billion ($12.6 billion) in T-Mobile US, a 1 billion ($1.22 billion) increase on 2020. Across the rest of its business, it will spend just 7.7 billion ($9.4 billion), the same as in 2020 and 100 million ($122 million) less than in 2019.

Despite its "Uncarrier" nickname, T-Mobile US has not done anything especially innovative in telecom. There are several explanations for its rapid and sustained growth. The first is simply that it operates in a market of 330 million people and only three big mobile operators, following its own merger with Sprint. It has also benefited from some cack-handed management of AT&T and Verizon, its two rivals, which wasted tens of billions of dollars on unsuccessful media acquisitions while T-Mobile was poaching their customers.

On top of that, T-Mobile has simply run a telecom business with aplomb. Its integration with Sprint is going better than anyone could have expected and has gifted T-Mobile with vast resources of spectrum to support its 5G service. Its reputation for marketing and customer service remains strong. And in Neville Ray it has a capable chief technology officer who has kept its network rollout on track. T-Mobile now looks set to overtake Verizon and become the largest mobile operator in the US.

No wonder Deutsche Telekom now wants majority ownership of a business in which it currently holds a 43% stake. To realize that ambition, it would have to exercise its option to acquire 8% of shares held by Japan's SoftBank. "We will take the path to US majority ... at attractive conditions and leveraging T-Mobile US shareholder returns," said Timotheus Höttges, Deutsche Telekom's CEO, in today's presentation.

But even when the US is included, Deutsche Telekom's sales forecast is a depressing reminder of the gulf that continues to widen between telecom operators and Internet firms. The public clouds, in particular, are on a hot streak and targeting many of the same business-to-business opportunities as telcos. AWS, the biggest, grew sales by more than $10 billion last year, to $45.4 billion.

Contrast that with T-Systems, the part of Deutsche Telekom that sells cloud and network services to business customers. Legacy parts of it are in terminal decline and its cloud business is not growing fast enough to compensate. Its sales fell 5.6% last year, to about 4.2 billion ($5.1 billion), and it ran up an operating loss of 12.5 million ($15.3 million). The partnerships it has with the public clouds have yet to improve its fortunes.

T-Systems' own capital markets day update comes on May 21. Its enterprise role, desire to succeed in the cloud and regular bouts of restructuring arguably make it the most intriguing of all Deutsche Telekom's operating units. But judging by Deutsche Telekom's headline sales forecast, CEO Adel Al-Saleh will not be guiding for an AWS-like outlook.