Towermania is sweeping Europe like a virus. Debt-ridden service providers are hiving off their masts. Infrastructure firms are snapping them up and renting out space to the region's operators. Investors have swooned like music groupies over these new landlords of the mobile telecom sector. The share price of Cellnex, Europe's biggest infrastructure specialist, has nearly quadrupled in the last five years. Valued at 23.6 billion ($28.7 billion), it is now worth 4.7 billion ($5.7 billion) more than Telefónica, one of Europe's biggest service providers. 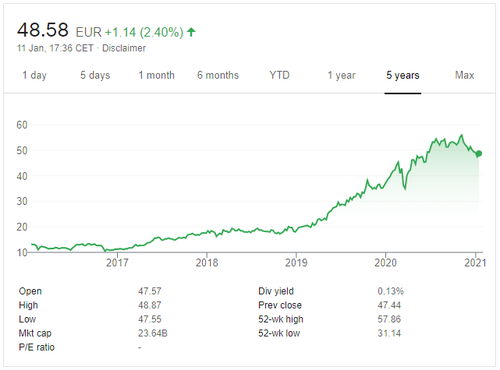 Investment demands, a weak sales outlook, regulatory threats and Internet challengers have all weighed heavily on the traditional telco. In the meantime, markets have fallen in love with the towerco as a dependable source of revenues that will never dry up. Service providers will always need somewhere to stick their network equipment. The take-up of more advanced mobile services will serve only to fuel demand for additional sites. Europe is awash with prospective tenants, and many are under pressure to sell property. Once they have signed on the dotted line, Cellnex and other landlords can sit back and count their takings.

But there have been signs of a recent cooling in the red-hot sector. Cellnex's share price peaked in October at 55.12 and has subsequently dropped to 48.58 at the time this article was written. Following a 10 billion ($12.2 billion) acquisition of about 24,600 European sites from Hong Kong's CK Hutchison, it looks highly leveraged, with debts that are more than 6.7 times its annual earnings, according to Fitch Ratings. The business outlook does not justify the amount it has recently spent on towers, according to one view.

Of landlords and tenants

Once towercos have bought or built sites, their only way to increase sales is by adding tenants to existing towers. Tenancy ratios, measuring the number of clients per site, are currently low. While Cellnex does not provide a figure in its most recent annual report, Vodafone's towerco, named Vantage Towers, reported a tenancy ratio of just 1.5 last July, when 90% of its revenues came from other parts of the Vodafone Group. Crown Castle, a towers company in the US, reported a tenancy ratio of 2.1 in November.

Towercos, then, ideally want to operate in markets where there are lots of unpropertied service providers and few infrastructure rivals. Europe's attractions have been obvious. In its hypercompetitive telecom markets, operators like Iliad and Three have been willing to sell towers and sign tenancy agreements. Crown Castle and American Tower, another US infrastructure specialist, are hardly to be seen.

The trouble is that regional incumbents such as Orange and Vodafone are not about to let Cellnex go unchallenged. Some are now setting up their own towercos. And while this activity means they can raise capital from other investors, the main players seem to have drawn the line at relinquishing control. Joint ventures between the likes of Deutsche Telekom and Orange remain a possibility, and they might help to minimize competition. But the overall number of towercos looks set to increase, not fall.

Generating additional tenancies will be difficult in this environment. A doubling of Cellnex's tenancy ratio across the industry would imply there are three service providers to a tower. As things stand, however, there is possibly a surplus of towers. Network-sharing deals that involve more than two partners are rare. One risk to any towerco trying to increase its tenancy ratio is the possibility of mergers between prospective tenants. Unlikely as this has looked in Europe for many years, concern it is falling behind China and the US on the rollout of 5G could make regulators more amenable to consolidation.

But if it does happen, Cellnex and others might not find raising prices any easier. On a like-for-like basis, Vodafone's European service revenues shrank 1.8% year-on-year in its recent September-ending quarter. Deutsche Telekom's European sales were down 1.7%. Outside France, Orange reported a 3.7% revenue drop for the same period. Even if coronavirus made last year even tougher than normal, European telecom revenues are not growing in any meaningful way. This will obviously constrain the ability of a towerco to charge more for tenancy, especially if it is owned by a service provider.

Towermania has yet to run its course. Just today, Vodafone announced the transfer to Vantage Towers of its 50% stake in Cornerstone, a UK network-sharing venture with Telefónica. Orange has recently talked up the opportunity to create a European towers champion, pooling its towers with those owned by rivals so that it can challenge Cellnex. Interest levels could help to raise capital for investment in 5G, addressing regional concern about Europe's telecom lag.

But few would bank on much growth in telecom revenues from 5G services. Amid the pandemic, service providers have made "digital transformation" and related cost savings their main priority. Ericsson recently forecast a long-term growth rate of more than 1% for the mobile infrastructure market, a figure that will hardly excite investors. These are the foundations on which towers are built. Unless the outlook changes, the towerco business model may start to look wobbly.