A new report has just been published that paints a bleak picture of the European smartphone market in the wake of the coronavirus pandemic and Russia's invasion of Ukraine, among other factors.

According to Counterpoint Research, the region's smartphone market dropped 12% year-over-year in Q1 2022 and registered the lowest Q1 shipments for nearly a decade. Ongoing component shortages and deteriorating economic conditions have also affected sales. 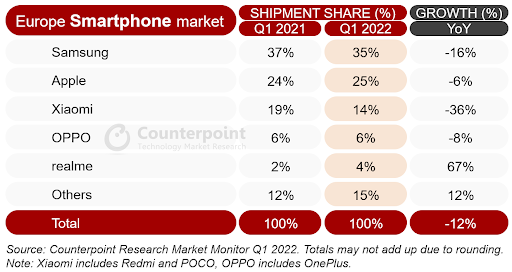 "The consequences of their withdrawal are, therefore, still relatively small on a regional scale," he said. "However, the impact of the war may develop wider ramifications if it leads to a drop in availability of raw materials, a rise in prices, further inflationary pressure and/or other vendors withdrawing from Russia."

The report shows that around 49 million smartphones were shipped in Europe in Q1 2022. Samsung remained the region's top smartphone vendor, with its highest market share since the third quarter of 2022. Realme was the only top-five vendor to register annual shipment growth in the quarter.

Stryjak does not have many words of comfort for the year ahead, either, and commented that the overall situation is expected to get worse before it gets better.

Counterpoint predicts that annual growth in Europe's smartphone shipments is expected to continue to decline for the next few quarters, especially in Q2 as the cost of living across the region hits record highs and the full impact of Samsung and Apple's withdrawal from Russia is realized.

The analyst firm already anticipates that total smartphone units shipped globally in 2022 are expected to fall 3% YoY to 1.36 billion units. IDC is also forecasting a 3.5% decline this year to 1.31 billion units.