Ericsson warns of China risks but shares and profits soar

Ericsson CEO Börje Ekholm warned investors that Sweden's decision to exclude Chinese vendors from its 5G market could trigger retaliation in China as the company breezed past financial targets with solid growth in sales and profitability.

Ekholm complained last year when Sweden's government said 5G license winners would have to use non-Chinese vendors, telling the Financial Times that it was important to respect "open markets and free competition." He has reportedly lobbied his government to overturn the ban. 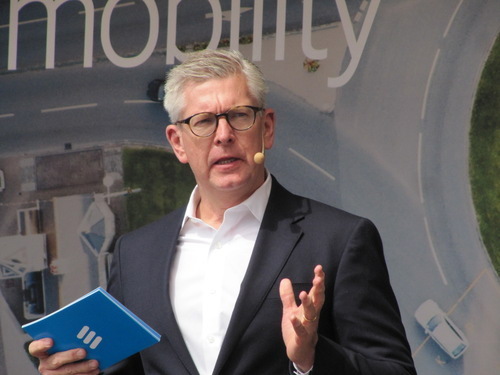 A Chinese response could imperil the fastest-growing part of Ericsson's international empire. Sales to Chinese operators hit 18.6 billion Swedish kroner (US$2.2 billion) last year and have grown 17% since 2019.

The Swedish situation is awkward for Ekholm because his firm has already signed a 5G contract with Net4Mobility, a joint venture between Tele2 and Telenor that has formerly relied exclusively on Huawei as a provider of network equipment and services.

In its latest financial report, Ericsson says a new Chinese law, introduced in December, is designed to "target companies deemed to be causing harm to Chinese interests." This month, Chinese authorities have issued further regulations "that would allow authorities to reject or limit foreign investments in China."

Geopolitics have also heightened the risk of an "industry split" and the "separation of global standards," said Ericsson.

Several analysts think 5G and forthcoming 6G technology could start to bifurcate along geopolitical fault lines, with China using different standards from those adopted in Europe and the US. "From an industry point of view, it is critical we hold together the global standard because it has allowed the world to connect 8 billion subscribers," Ekholm told analysts on a call earlier today.

Ericsson is also currently bogged down in a dispute with China's State Administration for Market Regulation, which has accused the Swedish firm of patent licensing abuses in China. Sanctions remain a possibility, said Ericsson in today's financial report.

A separate licensing dispute with South Korea's Samsung could wipe between SEK1 billion ($120 million) and SEK1.5 billion ($180 million) off quarterly operating profits starting in the first quarter of this year, said Ericsson in December.

"It is very hard to say how many quarters this will go on," said Ekholm. "Our focus is not on closing a deal in a specific quarter but on maximizing the net present value of the portfolio."

The update on China came as Ericsson recorded a full-year operating margin of 12%, reaching its target for 2022 some two years ahead of schedule.

Ekholm has led a successful turnaround since taking the helm in 2017, selling non-core assets, cutting jobs and pumping investment into the 5G business.

The strategy has come at enormous cost to the workforce, claiming about 25,000 jobs in total, Ekholm acknowledged during a capital markets day presentation last year.

But it has left Ericsson with a more competitive lineup of products than it had during the transition from 3G to 4G technology, when Huawei overtook it to become the world's largest supplier to the telecom sector.

Investors shrugged off concern about China, sending Ericsson's share price up 11% in early-afternoon trading, to about SEK108.80, its highest level since early 2015.

While Ericsson's share of the Chinese market is estimated at less than 12%, it has benefited from a spending splurge by Chinese operators, which are reckoned to have bought around 700,000 5G basestations in 2020.

In Europe, Ekholm claimed to have taken share from Western and Chinese rivals but said the overall market is still not growing. "We have limited 5G rollouts in Europe and are a bit concerned it is falling behind the frontrunners," he told analysts.

Besides being named as one of Net4Mobility's 5G vendors, Ericsson has recently landed major 5G contracts in the UK with BT and Three after government authorities moved to ban the use of Huawei products.

Fredrik Jejdling, Ericsson's head of networks, said government restrictions had bolstered Ericsson against Chinese rivals but insisted most gains were still at the expense of other companies. "Before we said we were taking market share largely from non-Chinese vendors and now there are certain restrictions in some markets, but the majority is against the former and that means we're taking market share on the basis of a competitive portfolio," he told Light Reading.

Ericsson may have benefited from turmoil at Finland's Nokia, the other dominant firm in the mobile infrastructure market, which ran into 5G product difficulties in 2019 and is still phasing out the more expensive components it originally selected for its equipment.

Telco interest in open RAN, a technology at odds with Ericsson's customized approach to product development, is a further risk in Europe, where a number of big operators last week signed a memorandum of understanding that called for government investment in open RAN technology.

Despite customer interest, Ericsson continues to downplay the competitiveness of open RAN products in more demanding environments. "The discussion on that architecture and when it will be truly competitive is a bit hard to address right now but we don't see it really being ready for prime time except for low-performance applications or segments," said Ekholm.

Discussion about speeding up Europe's deployment of mainstream 5G technology would be a "more healthy debate" right now, he said.

While the networks business at Ericsson is on relatively strong ground, the smaller digital services unit has been a drag on performance as customer demand for legacy products continues to fall. Sales at this division dropped 6% last year, to SEK37.3 billion ($4.5 billion), although its operating loss narrowed to about SEK2.2 billion ($260 million) from SEK4 billion ($480 million) in 2019.

There was also a sharp fall of 12% in managed services revenues, to roughly SEK22.6 billion ($2.7 billion), after the merger between US operators T-Mobile and Sprint left Ericsson with a smaller contract. Operating profits were the same at about SEK4 billion ($480 million).

Ericsson now sees the enterprise sector of the market as a major growth opportunity, having recently finalized a $1.1 billion takeover of Cradlepoint, a US company that sells wireless products to businesses.

Jejdling said the strong performance last year would give Ericsson more scope to invest in the enterprise sector. "The cash position and the margin development give us more freedom," he said. "They give us the opportunity to move into the big area of digitizing enterprises."

Ericsson is targeting an operating margin of 12-14% in 2022 and says its ambition is to realize a long-term margin of 15-18% for earnings before interest, tax and amortization.