Turmoil appears to suit Cellnex, the Spanish "towers" company determined to buy up the property that hosts mobile networks.

As the pandemic ails Europe's debt-burdened telcos, capital-raising asset sales are all the rage. Like a Russian oligarch in the 1990s, Cellnex is building an empire amid the chaos.

That empire has already grown faster than Genghis Khan's. At the time of its initial public offering in May 2015, Cellnex had about 10,400 European sites. By this June, the number in operation reached 40,505. It expects to have 61,000 by 2027, including sites it builds and acquires.

A new power broker is rising in the region's telecom sector. 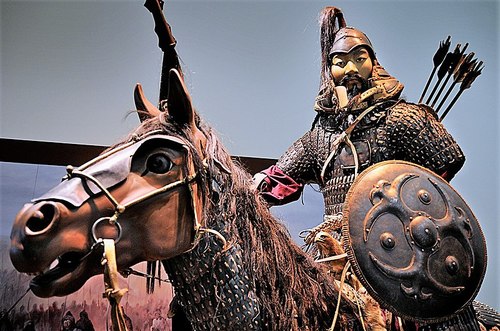 Genghis Khan, an empire builder with a more violent reputation.

On the warpath
The issue of new shares worth 4 billion ($4.6 billion), announced today, should provide part of the war chest for takeover activity. Cellnex has an eye on deals worth about 11 billion ($12.8 billion) altogether, having already announced investments that total 14.1 billion ($16.3 billion) in the last five years.

Investors have loved the story. In February last year, Cellnex's share price was valued at just 20.03 in Madrid. Today it trades at 58.40 and has gained 40% this year, despite the coronavirus. New shares are to be issued for 39.45 each, offering a discount of about 30% on the July 22 closing price. 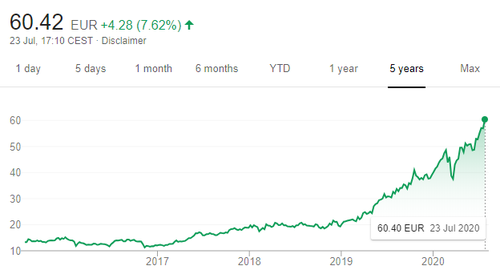 Does it all make sense?

Analysts at Jefferies, a bank, are certainly convinced.

"Few will bet against this par excellence management team spending the next two years once again perfectly walking the tightrope of leveraged returns," they said in a research note issued today. "In our view, this stewarding of capital has been the main hallmark of Cellnex's success to date."

The trick Cellnex has pulled off, as Jefferies sees it, is striking the right three-way balance between asset price, asset yield and asset funding "to extract optimal equity returns."

Cellnex is attractive to investors  and its main shareholders include investment firms such as Edizione, GIC and the Abu Dhabi Investment Authority  because its assets give it a dependable source of income from tenants. All Cellnex need do is manage that unglamorous business well.

Some of the recent figures offer encouragement. Earlier this week, Cellnex reported second-quarter results that showed 48% growth in revenues, to 723 million ($838 million), compared with the year-earlier period, as well as a 54% increase in the recurring leveraged free cash flow (RLFCF), to 267 million ($309 million).

Shrugging off any coronavirus worries, it is forecasting a 70% increase in RLFCF this year.

Risk and reward
Are there risks? With a net debt of 3.5 billion ($4.1 billion) and projected earnings (before interest, tax, depreciation and amortization) of about 1.2 billion ($1.4 billion), Cellnex looks far more leveraged than many of its tenants.

In April, Fitch Ratings said Cellnex would have to continue funding deals with an equity component to maintain an investment-grade rating. Coronavirus, despite the company's optimism, might also result in delays to construction projects this year and next, said Fitch. That could happen if mobile operators slash capital expenditure.

The expansion activity has also come at the expense of profitability. Cellnex posted a net loss of 43 million ($50 million) for the first six months, largely because takeover activity increased amortization costs. Net losses are expected in "coming quarters," said the firm earlier this week.

The opportunity looks substantial, though. Notwithstanding delays, the launch of 5G will necessitate investment in additional sites to handle superfast services in hotspots and so-called "small cells."

Cellnex also spies an opportunity to play in "backhaul," providing the fiber-optic links to the towers. Its facilities might even house some of the IT resources that are moved closer to customers  at the network's "edge"  in certain 5G scenarios.

The telco retreat
Its expansion inevitably means operators are retreating from property ownership.

Since 2017, Cellnex has signed deals with Sunrise (Switzerland), Bouygues (France), Iliad (France and Italy), BT (the UK), Orange (Spain) and NOS (Portugal), among others. 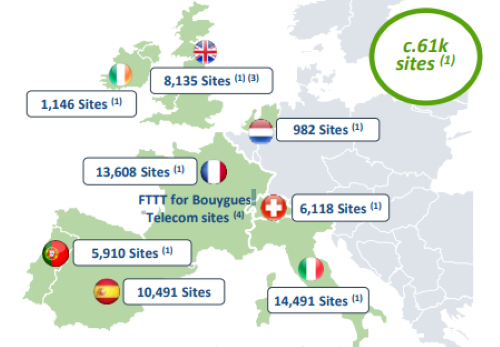 Major European service providers, including Vodafone and Orange, are now carving out their mobile infrastructure assets and looking for equity partners as they try to raise capital for other activities.

Such industry giants have balked at selling a majority stake in their tower businesses, though. And Cellnex is far from dominant in the towers market.

In the investor presentation it released earlier this week, Cellnex estimated there were roughly half a million mobile sites, plus "adjacent assets," across the region. It would require a lot of deals and a much bigger retreat by operators to make Cellnex a 5G oligarch.

But it could happen. Years ago, Europe's telcos would have resisted some of the network-sharing agreements and asset sales that are a regular occurrence today. If Cellnex maintains its growth trajectory, and financial pressures force operators to cede further ground, the balance of power could shift in a more decisive way.