Bidding in the FCC's auction of 3.5GHz spectrum licenses appears to be easing, leading a number of industry watchers to conclude that the event may well be winding down.

"Bidding has started to slow substantially," wrote the Wall Street analysts at Raymond James in a note to investors this weekend. "It appears to be entering the tail phase, that usually entails (pun intended) many rounds of low incremental bids until the FCC accelerates the pace of rounds to flush out all remaining bidding and eligibility and we can write the final tale on this auction." 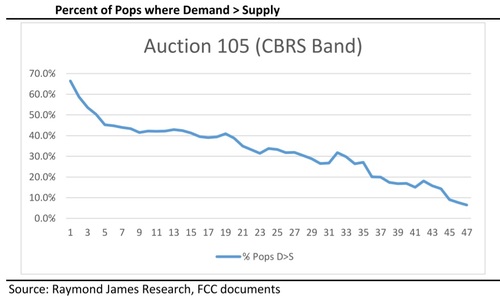 The number of locations where demand outstrips supply is shrinking, leading many to believe the auction is almost over. "Pops" stands for "points of presence," and is roughly similar to the measurement of population in a particular location. Click here for a larger version of this image.
(Source: Raymond James)

The FCC is now holding four bidding rounds per day, according to Ari Meltzer and Rick Engelman with Wiley Rein, a law firm that is heavily involved in telecom matters. The FCC generally increases the number of bidding rounds per day during spectrum auctions as bidding slows, in order to bring such events to a quick close.

After 50 rounds of bidding on Monday, the FCC's CBRS spectrum auction has raised a grand total of $4.3 billion in gross proceeds.

The event is important because CBRS spectrum could be used for a wide variety of services, including adding capacity to 4G and 5G networks, fixed wireless offerings in urban or rural areas, smart city applications or other services.

"While gross proceeds have increased substantially this week, growing $1.6BN (up 64% from last Friday) to $4.2BN, aggregate bids have stabilized, growing only 11% (or $0.4BN since last Friday) to $4.3BN," wrote the Wall Street analysts at New Street Research in a note to investors this weekend. "Aggregate bids exceed gross proceeds by only $123,000, the smallest at any point in the auction."

The auction will conclude when aggregate bids and gross proceeds converge.

The New Street analysts wrote that the auction recently reached an average of $0.20 per MHz/POP, which they acknowledged is meaningfully above their baseline forecast for the event. The MHz/POP figure is a measurement of the number of people covered compared with the amount of spectrum available.

"Earlier this week, as prices in large urban areas, like New York and LA, approached or exceeded $0.5 per MHz/POP, demand fell sharply as bidders pulled out of those markets," the analysts wrote, noting that spectrum license prices in such valuable locations may be reaching the ceiling of what most bidders can afford. 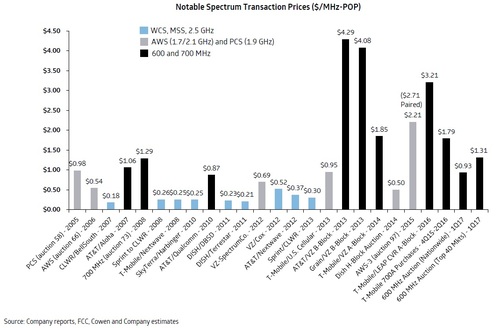 The value of spectrum fluctuates according to a variety of factors, including demand and the type of spectrum involved. Click here for a larger version of this image.
(Source: Cowen)

While the end may be in sight for the CBRS auction, the event certainly has defied predictions. For example, estimates on the total amount of money it would raise ranged from just $1.3 billion to fully $10 billion.

As in past auctions, the FCC is not identifying CBRS bidders during the auction, and is instead only releasing information on which locations are receiving bids and how much they're going for. The agency will keep bidding open until there are no more bids, a process that could take weeks or even months. Many industry watchers expect Verizon to walk away with the bulk of the 22,631 CBRS spectrum licenses up for grabs.