Apple took the wraps off its newest lineup of iPhones this week, and applied the mostly arbitrary "13" model number to the new gadgets.

That's vaguely noteworthy considering there was some speculation that Apple might forgo its sequential numbering system this year in favor of something else, as it did with the iPhone XS in 2018 and the 6S in 2016. Thirteen could be considered unlucky, after all.

Nonetheless, the annual release of the iPhone is an important milestone in the global wireless industry's calendar. It can sometimes herald the adoption of new technologies, and it often represents an opportunity for network operators to steal customers from each other with flashy discounts and promotions.

The annual iPhone launch is "a major event for wireless operators and typically sets the tone for the competitive landscape heading into Q4," the financial analysts with LightShed Partners wrote in a post to investors.

"Apple's new iPhone 13 will be a boost for 5G adoption," argued GlobalData analyst Anisha Bhatia. "Unlike Android, iOS users lack a strong selection of 5G devices. The iPhone 13 family is a welcome addition for consumers looking to upgrade."

However, this year's iPhone launch was nothing like last year's iPhone 12 introduction, which heavily focused on the device's 5G capabilities and the operators  namely Verizon  selling such services.

"Somewhere in the middle of the 80-minute presentation was about 90 seconds spent on 5G," wrote CNET of Apple's iPhone 13 launch event on Tuesday. "The relegation of 5G from center stage to side act underscores the bumpy introduction of the next-generation wireless technology."

Indeed, Opensignal analyst Ian Fogg noted that Apple's iPhones only support 5G in the millimeter wave (mmWave) bands in the US. That support is missing in other countries moving toward the technology, including Japan and South Korea.

Moreover, Apple's new 5G-capable iPad mini doesn't support mmWave 5G at all, according to PCMag's Sascha Segan. That's noteworthy considering even US operators appear to be shifting away from mmWave 5G in favor of midband 5G deployments.

Perhaps in response, T-Mobile announced that Apple's iPhones will now display a special "5G UC" icon to denote support for the operator's "Ultra Capacity" midband 5G network. That means each US operator will now have its own special 5G icon: 5G UW for Verizon and 5Ge for AT&T.

"It's hard not to connect the addition of these UC and UW phone indicators as a manifestation of the marketing challenges generated by the underwhelming performance of early 5G deployments across the industry," wrote the LightShed analysts. "Now, users presumably will be looking for a UC or UW on their phones. Let's hope the operators deliver noticeable service improvements when these letters appear."

MIA from the iPhone

But Verizon, T-Mobile and AT&T aren't the only US wireless providers closely watching Apple's movements in 5G. Dish Network and Globalstar too are now in the iPhone vendor's orbit.

And both companies came up empty handed this week.

"That whole iPhone satellite thing was bogus," wrote PCMag this week, pointing to recent rumors that Apple's iPhone might connect to Globalstar's satellites. That rumor did not pan out.

As a result, Globalstar's stock lost almost all of its rumor-fed gains  falling back to around $1 per share from $2 per share  in the hours following Apple's iPhone 13 unveiling.

However, there remains the distinct possibility that future iPhones  and a wide range of other devices  will be able to connect to satellites at some point in the future. After all, the organization developing 5G standards, the 3GPP, is specifically developing technologies to connect phones to satellites.

As for Dish Network, Apple's latest devices do not connect to the spectrum bands it's using to build a nationwide 5G network. A Dish representative did not respond to questions from Light Reading on the topic. That's noteworthy considering the company earlier this year hired an executive to help create an ecosystem of devices for Dish's spectrum bands.

Despite Apple's apparent disinterest in 5G, all of the major US operators are offering steep discounts on the vendor's newest smartphone. Specifically, Verizon, T-Mobile and AT&T are each providing hundreds of dollars in discounts to new and existing customers who trade in an existing smartphone in order to purchase an iPhone 13.

Further, T-Mobile is offering a new "forever upgrade" program that promises to discount new iPhones by $800 every two years.

However, there are plenty of caveats to each carrier's promotion. For example, T-Mobile is requiring customers to sign up for its most expensive unlimited plan, Magenta MAX. Verizon, meanwhile, is offering an additional $500 to customers who switch from another operator.

The result is a dense web of stipulations and exceptions that iPhone fans must navigate as they purchase their new phones. 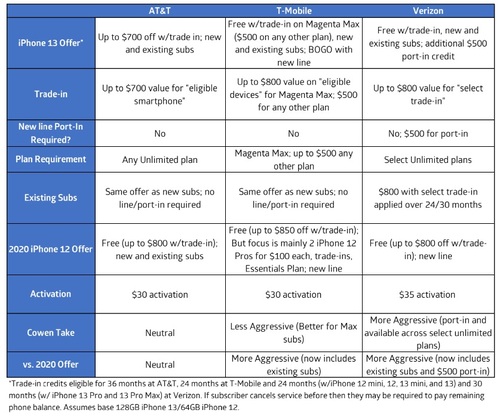 The financial analysts at Cowen offer a breakdown of each major US operator's iPhone 13 promotions. Click here for a larger version of this image.
(Source: Cowen)

Ultimately, though, the analysts at LightShed said this shows that operators are putting more and more dollars behind their annual iPhone promotions.

The LightShed analysts offer a look at how each operator has discounted various iPhone models over the years. Click here for a larger version of this image.
(Source: LightShed)