Almost three years after launching its first-generation "xFi Pods," Comcast has begun to hawk an upgraded version of its Wi-Fi extenders, along with a promise of faster speeds and greater in-home range.

The biggest change in Comcast's second-gen xFi Pods is a shift from a dual-band to a tri-band radio  essentially adding a second 5GHz 4x4 radio that supports additional backhaul traffic. 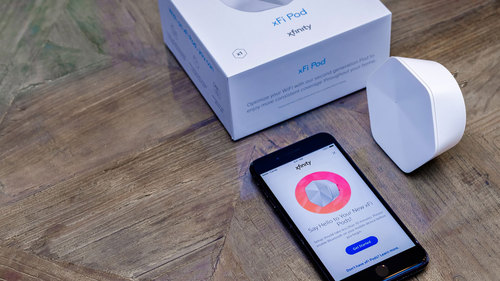 While speed into the home and onto the customer's home network depends on the tier the subscriber is on, Comcast found that the second-gen extenders can consistently deliver up to 500 Mbit/s on connected clients, compared to about 200 Mbit/s with the previous product.

The new Pods don't support Wi-Fi 6, but Ecker says the addition of tri-band technology provides improved speed and range that one would expect to get from a Wi-Fi 6 radio. Comcast, which has introduced a gateway equipped with Wi-Fi 6, does have Wi-Fi 6 on its Pod product roadmap, he said.

Comcast's new Pods share traits with Plume's SuperPod, at least in terms of hardware. A key difference in Comcast's version is the software for Comcast's xFi home Wi-Fi management platform and the integrated support for the cable operator's lineup of xFi-compatible gateways.

The additional speed and reach supported by the new Pods also means Comcast will be able to sell the new Pods as a single-pack for $119 or a two-pack for $199 for in-home coverage. Comcast sold the previous version of the Pods in three- and six-packs, depending on Wi-Fi home coverage needs. Comcast is selling the Pods directly via its stores and digital channels and currently has no plans to offer them on a leased basis.

Comcast doesn't say what percentage of its 27.2 million residential broadband customers have purchased xFi Pods. But the cable op noted that it has seen demand for the products double since March amid a pandemic that has caused millions to work and school from home.

Ecker added that Comcast has also seen more adoption of its Pods across all speed tiers in 2020 than it saw in prior years.

Comcast's xFi Pods fit into a broader connectivity strategy in which the operator is trying to differentiate its broadband service beyond speed with more coverage and control of the home's Wi-Fi network.

It's an opportunity not lost on other cablecos and ISPs that are working with vendors such as AirTies, eero (now part of Amazon) and CommScope, among others, that supply operators with extenders and home network management software.

Syndication partners play the Pod game
Comcast's latest handiwork will also be available to the operator's X1 syndication partners that, in addition to tapping into Comcast's cloud-based service for video, have also been taking advantage of Comcast-designed gateways and Wi-Fi extenders.