Comcast and Charter Communications have gained a solid foothold in wireless with their relatively new wireless offerings, but they'll likewise need to "significantly" lower their costs if they are to mount a more serious threat to AT&T, Verizon and, particularly, T-Mobile, reckons a top industry analyst.

And to lower costs, they'll be required to offload a lot more traffic from their Verizon MVNO agreements onto their own networks. While their own Wi-Fi networks offer some help in this area, tapping into the CBRS band to accomplish will be critical to their longer-term mobile strategies going forward.

"Cable needs CBRS to bring their costs down, particularly if they are to eventually have the ability to price competitively versus T-Mobile," Craig Moffett, analyst with MoffettNathanson, noted in a new report (registration required) that offers a high-level review on the US wireless industry.

The shared CBRS band will support both unlicensed and licensed use-cases, and it's apparent that both Comcast and Charter want to seize upon the licensed end of it as the CBRS auction starts to wind down. Among the 271 qualified bidders registered to bid, Comcast has tossed its hat in under the name XF Wireless Investment LLC (evidently a nod to the cable op's "Xfinity" branding), while Charter is in under the name Spectrum Wireless Holdings, the analyst points out.

Becoming significant buyers of CBRS spectrum will represent a "first step" for Comcast and Charter toward offloading traffic from their MVNO agreement with Verizon, Moffett explained. "Their costs are too high today to price much lower. And their prices are too high to compete with T-Mobile."

But that's not the only step – there's also speculation swirling that both Comcast and Charter are now in better position to negotiate better MVNO deals with Verizon after América Móvil's TracFone announced it had secured a new and improved MVNO agreement of its own.

Fishing in a shallow pool
There's no doubt that Comcast, Charter and, to a smaller degree, Altice USA (which has an MVNO with T-Mobile following the Sprint merger) have had some wireless success  they added 485,000 lines in Q2 2020, expanding their combined total to 4.23 million. 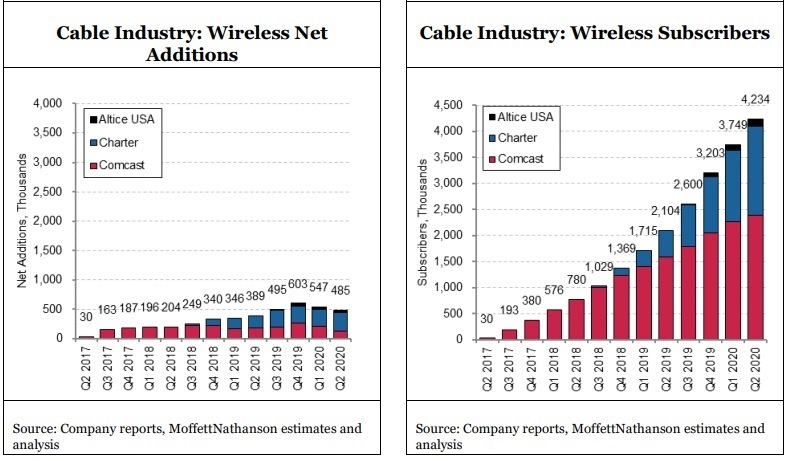 Even though cable's rate of wireless line additions slowed in Q2 2020 after a huge Q1, Charter, Comcast and Altice USA still represented 35% of the US wireless industry's net growth in the second quarter. 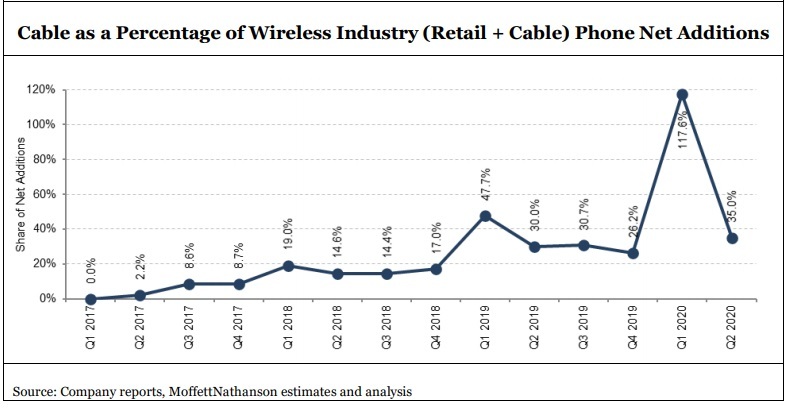 Cable's "outsized share of the market growth" has put pressure on the incumbents, Moffett said. But he stressed that Comcast's and Charter's flat-rate unlimited wireless plans are more competitive to AT&T and Verizon (largely for customers in family plans of two lines or less) and only competitive versus T-Mobile for a single-line plan.

Charter has diversified and broadened its horizons a bit with respect to pricing and packaging via the recent introduction of Unlimited Plus, a new plan for customers who stream a lot of HD video outside the home. But Moffett contends that cable operators will be pressed to do more if they are to compete on a bigger basis.

"The broader conclusion here is clear," Moffett said. "The pool in which the cable operators are currently fishing is relatively shallow."

For now, cutting prices isn't really an option for Comcast or Charter, he adds, holding that they are already providing wireless on thin gross margins and losing money after customer acquisition costs are factored in. Being able to offload more traffic onto CBRS spectrum could put them in better position to be more aggressive and competitive from a price and packaging standpoint.