Virtual multichannel video programming distributors (vMVPDs) bounced back in the third quarter of 2022, but the uptick wasn't enough to avert a worst-ever rate of decline for the broader pay-TV sector.

The overall rate of decline for US pay-TV dipped to -6.2% in Q3 2022, worse than last quarter's -6.2% and the year-ago drop of -5.2%, MoffettNathanson (a unit of SVB Securities) estimated in its latest "Cord-Cutting Monitor" report (registration required). 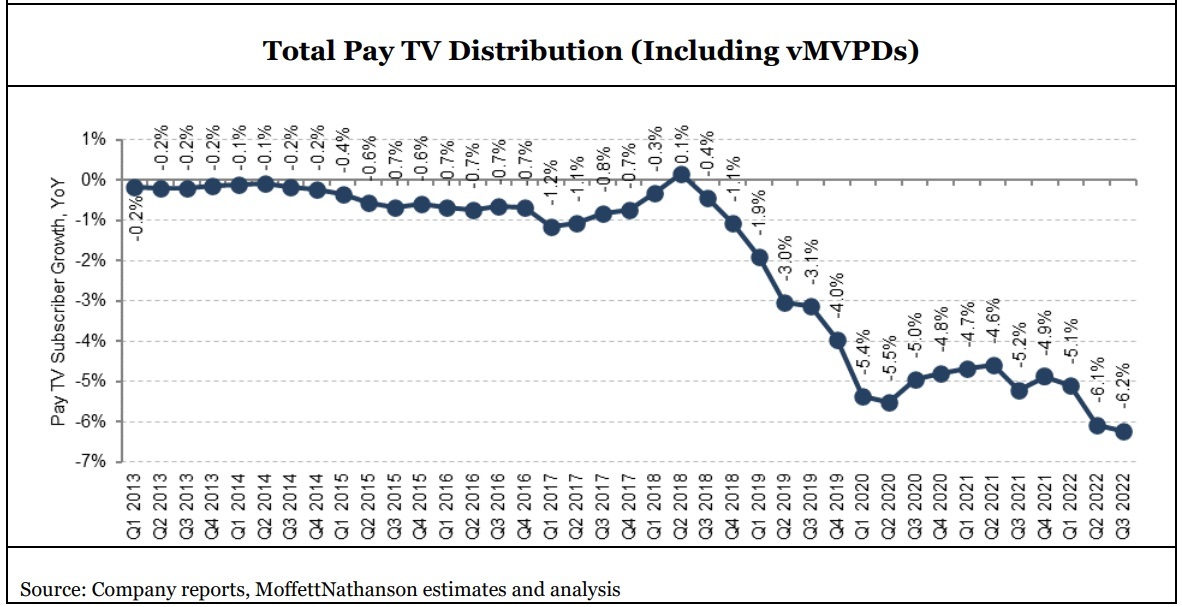 That decline left pay-TV's penetration of occupied US households (including vMVPDs) at 61%, a level last seen in 1993, just prior to the arrival of satellite TV in the US, MoffettNathanson noted.

The total US pay-TV sector – with traditional service providers and vMVPDs accounted for – shed 655,000 subscribers in Q3, widened from a year-ago loss of -617,000.

Traditional providers (cable, satellite and telco) combined to lose a whopping 1.95 million subs in the quarter, versus -1.61 million in the year-ago period. The rate of decline in the traditional pay-TV segment dipped to -8.7%.

"There remains no obvious floor for traditional video distribution; whatever sports and news floor there might be for cable network programming – and we're no longer confident even of that," MoffettNathanson analyst Craig Moffett surmised.

Moffett believes cable is better positioned to win in wireless than in video going forward. However, he still sees a role for cable in the future of video distribution amid the need for some entity to be an "aggregator of aggregators" as the sector continues to shift to standalone, direct-to-consumer (DTC) streaming services and away from the old, bloated pay-TV channel bundle.

Comcast and Charter Communications hope to fit that bill with "Xumo," their newly formed national streaming joint venture. But Moffett still sees bumps in the road as it's clear that "the streamers are yet willing to see their brands, and customer ownership, subordinated to such an aggregator brand. So, the opportunity isn't an opportunity. Yet."

But Moffett also recognizes that the tech giants (i.e. Amazon and Google) also have the scale and pocketbooks to be competitive and properly serve that aggregation role.

Can the linear model be saved? It might be up to Disney

Bigger picture, Moffett still wonders if the linear pay-TV business can be saved, reiterating a recent thought that the "linear model won't die of old age, it will instead die of neglect" as more of the best content flows to the DTC model.

Perhaps it could be saved if the media businesses that have been focused on DTC streaming services dial things back in a way to help preserve that old model.

Moffett points to Warner Bros. Discovery, which has made a commitment to preserve the linear TV business, but views the company as the weakest of the majors when it comes to live sports. Comcast's NBCU is "playing catch-up, but with only limited success," and Paramount+ "doesn't have the scale or heft to shape the outcome here."

In Moffett's view, "[i]t all comes down to Disney."

Bob Iger has returned as Disney's CEO. While it's not clear what all he has in mind, Iger has already made it clear that it's high time for Disney's streaming business to focus on profitability rather than growth-at-all-costs.

And what will come of ESPN, the sports giant that's still holding what's left of pay-TV together? Will Disney retool Hulu to create a more targeted linear sports and news bundle using the Fox, Disney and Turner assets alongside other a la carte services at a more attractive entry price? Moffett argues that now might be the right time to try it.

"Perhaps appropriately, the future not only of Disney the company, but indeed of the entire linear video industry, hinges on one question: What will Bob Iger do?" Moffett concluded.