HBO Max has begun to offer free access to select original TV episodes via its app. The streaming service is aiming to reach more consumers and perhaps lure in a few new paying customers.

That in-app offer complements and extends other free, sampling opportunities HBO Max offers via its website, HBOMax.com, as well as through Snapchat's HBO Max Snap Mini, an option that lets Snapchat users watch a selection of free episodes of HBO Max programming with other Snapchat users.

The free, in-app offering will initially provide access to 13 episodes of HBO and Max Originals, including episodes from Batwoman, Euphoria, Game of Thrones, Lovecraft Country and Perry Mason. HBO Max plans to add or rotate its selection of free titles periodically. The free in-app feature also lets users browse HBO Max's full catalog and see how it matches up with other premium SVoD streaming services. 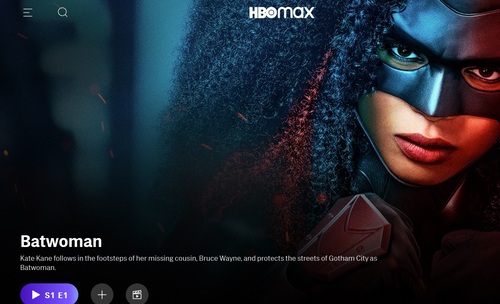 An episodes from Batwoman is among the initial rotation of free content that HBO Max is serving up via its app.
(Image source: HBO Max)

The general aim is to provide another way for would-be HBO Max subscribers to kick the tires and entice them to become paying subscribers.

The free, in-app option enters the picture more than a year after HBO Max launched nationally. Though most of HBO Max's initial group of customers have been signed up through existing pay-TV partners, the streaming service is also starting to gain some ground with its standalone, direct-to-consumer service.

Thanks in part to the momentum it's seeing from launches in Latin American markets, AT&T now expects HBO Max to have between 70 million to 73 million subs worldwide by the end of 2021. On a standalone basis, HBO Max's ad-free service sells for $14.99 per month, with its recently added ad-supported tier fetching $9.99 per month.

All of that activity is also happening as WarnerMedia and Discovery Communications pursue a merger. The resulting company, to be called Warner Bros. Discovery, will be helmed by current Discovery CEO David Zaslav.

Speaking on Discovery earnings call Tuesday, Zaslav said there appears to be "broad support for this transaction. We haven't heard any pushback  We are not seeing any yellow lights or red lights. Having said that, we're not in control of the timing."

The current expectation is that the deal will be wrapped up by mid-2022.