TiVo's ultimate plan to separate its products business and its licensing/intellectual property business has been put on temporary hold after the company struck an all-stock deal to merge with Xperi and form a company with a combined enterprise value of about $3 billion.

Prior to today's deal, TiVo had set a deadline to split itself into two separately operated companies by April 2020. That general idea remains intact, as Xperi and TiVo plan eventually to separate those businesses further down the road, when the technologies and products of both TiVo and Xperi have been integrated. They didn't predict when that anticipated split might happen, but TiVo and Xperi expect to close their merger in Q2 2020.

"The industrial logic behind separating the businesses still holds," Dave Shull, TiVo's CEO, said Thursday during a call to discuss the transaction, noting that the benefits of splitting out the products and licencing/IP businesses remains, but the benefits will apply to a company that's about twice the size that TiVo and Xperi are on their own.

"The trade-off here is scale," Shull added. "Scale trumps the short-term delays we might see in this process."

"We both believe that scale is critical," added Jon Kirchner, CEO of Xperi, which makes and sells various audio, imaging and wireless products and technologies under brands such as DTS, HD Radio and IMAX. "We think we're better together." 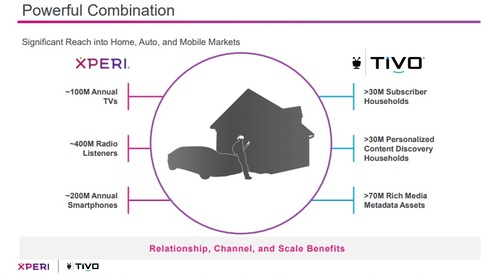 Xperi and TiVo also believe the combination will drive scale into their respective products businesses, which includes a mix of software, hardware and silicon that crosses into several markets, including home audio and pay-TV, smart TVs and smartphones, high-end imaging, video streaming, advanced advertising, content search and discovery and automotive entertainment.

The companies likewise expect TiVo's user experience and search and personalization technology, once fully integrated, to be poised to expand into some new markets and platforms where Xperi has a strong presence, particularly in the smart TV and automotive sectors.

Xperi's technology, for example, is already present in about 100 million connected TVs, and the company sees opportunities for TiVo's software to become an integral part of that mix. Xperi also has reach into the automotive entertainment market with radio, and believes TiVo's technology can help it broaden its influence in that segment as car makers seek out solutions that can deliver more advanced entertainment capabilities, including content discovery and playback to connected, semi-autonomous and autonomous vehicles.

A broader aim is to create commonality across those disparate home, mobile and automotive platforms amid the fragmented video and audio streaming landscape and "help consumers cut through the entertainment chaos," Shull said.

On the intellectual property end, the combined Xperi/TiVo will have more than 10,000 patents spanning areas such as consumer electronics, pay-TV, new media and the semiconductor market.

One persistent hangover on TiVo's IP/licensing business is its ongoing litigation with Comcast. That situation has no end in sight as both sides have refused to budge.

Kirchner downplayed the Comcast issue, believing that TiVo's patent portfolio is solid despite some recent wins and losses in TiVo's battle with the nation's largest cable operator.

"We kicked the tires and did a ton of work on this question," Kirchner said, noting that it's Xperi's desire to resolve such issues outside of litigation. "We are very comfortable that the IP portfolio itself and the long-term prospects are positive."

The combined company, to be based in San Jose, Calif., will use the Xperi name, with TiVo remaining as a sub-brand under the Xperi umbrella. Kirchner will stay as CEO of the combined company. Shull will lead TiVo through the closing of the deal and stay on as a strategic advisor. Xperi and TiVo will each appoint three board directors; the chairman of the board will be selected by the independent directors of the board.

The combined company had $1.09 billion in TiVo revenues and Xperi "billings" and more than $250 million in operating cash flow on a pro forma basis for the 12 months ended September 30, 2019. TiVo and Xperi expect to achieve at least $50 million of synergies by the end of 2021 via the integrations of their combined businesses.