Why Disney Could End Up Streaming for AT&T

Through a series of acquisitions, AT&T Inc. (NYSE: T) could end up as a new kind of Disney customer, relying on the entertainment giant for streaming video infrastructure services. The result would have nothing to do with Walt Disney Co. (NYSE: DIS) providing content to AT&T, something the Mouse House already does through licensing agreements that feed AT&T's U-verse, DirecTV and DirecTV Now offerings. Instead, it would come about because of Disney's recent decision to acquire a majority ownership stake in BAMTech, the streaming technology company born out of MLBAM . (See Disney Joins OTT Bandwagon.)

Here's how the situation plays out. BAMTech is currently the streaming partner behind the HBO Now over-the-top video product. If Disney's buyout plan gains regulatory approval, that means Home Box Office Inc. (HBO) will become a Disney customer. Meanwhile, AT&T is in the process of closing a deal to acquire HBO parent company Time Warner Inc. (NYSE: TWX). Assuming that transaction also goes through, AT&T will automatically become a Disney customer through its Time Warner/HBO ownership. 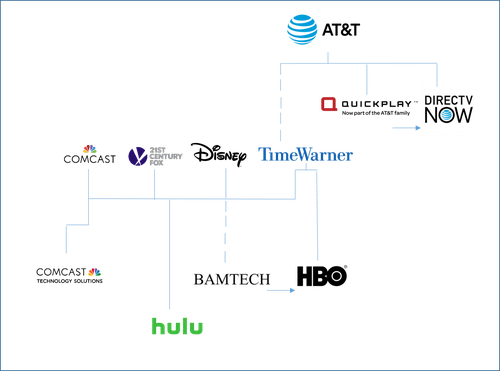 There is a catch, however. Reports suggest that HBO's contract with BAMTech is set to run out this year, and the entertainment provider already uses additional streaming services for other HBO products. It's entirely conceivable that HBO could be in the process of switching its supplier contract to another vendor, or moving the service in-house, even before the AT&T deal goes through.

Light Reading reached out to HBO for comment and was told: "We are still assessing but we have stated publicly that we do plan on consolidating all streaming products (we have five different ones around the globe) onto one internal platform."

For AT&T's part, the company doesn't appear to need BAMTech for streaming purposes. The telco acquired Canadian company Quickplay last year, and it's Quickplay's platform that underlies the DirecTV Now OTT service. AT&T has also said it's consolidating all of its video services on to a single platform, suggesting that Quickplay will be the primary technology support for any video streaming initiatives going forward. (See AT&T, Verizon Want to Wholesale IPTV.)

Meanwhile, it's worth noting that Disney is also a Verizon DMS customer in addition to partnering with (and soon owning) BAMTech. That fact illustrates just how complex the streaming ecosystem has grown, and how many parts of the video delivery chain overlap.

As another example of overlap and companies intertwining, Hulu LLC announced recently that it's using Amazon Web Services Inc. to power the Hulu live TV service. (See Hulu Hooks Up With AWS for Live TV.)

This despite the fact that Comcast is one of Hulu's owners, and also offers its own streaming video technology. But then again, Comcast also uses AWS for some of its own infrastructure purposes.

Also, keep in mind that Comcast, Time Warner and Disney, alongside 21st Century Fox, are all co-owners of Hulu. (See Comcast Ready for Clash With Hulu.)

And the web grows ever more tangled.

For those who are more finance savvy among us, we have heard of sales of physical assets such as buildings and lease back scheme, that is financial engineering.

When I was a consultant at NYNEX, I was with a non-regulated unit. I could think of several reasons why the parent company wanted to set it up that way.

It could also be JV and subsequent buy out of partners. In Disney case, it is M&A. It was its core competency. Now it is
Reply | Post Message | MESSAGES LIST | START A BOARD

kq4ym 8/28/2017 | 2:04:49 PM
Re: So Funny The links among all the companes can indeed be complex and makes me wonder if there's some underlying meaning to he seemingly inefficient coordination among the parties. I wonder if too government regulators might want to take a look or maybe the complications are to keep out of site from regulation?
Reply | Post Message | MESSAGES LIST | START A BOARD

jbtombes 8/17/2017 | 2:19:59 PM
hot swappable? You wonder how easy it would be to 'swap out' QuickPlay for BAM Tech. In theory, the barriers to switching suppliers are lower in the cloud. But custom implementations might make them stickier.
Reply | Post Message | MESSAGES LIST | START A BOARD