Verizon's been on a very slow roll with its next-gen IPTV service, but the telco is inching forward with the start of extended beta testing in recent weeks.

As first reported by DSLReports, Verizon Communications Inc. (NYSE: VZ) has been reaching out to select customers to offer a free year of Fios video, voice and data services in exchange for participation in a trial of the new IPTV product. Verizon has confirmed the beta test, saying "We are currently testing new advanced TV features with a select group of employees and customers," but also that "We don't have any additional information to share right now." 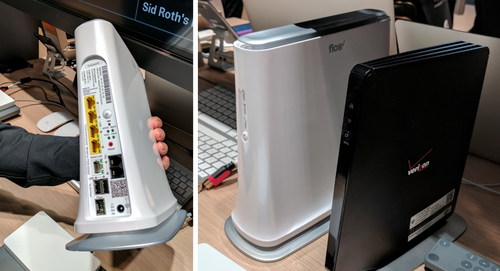 New Verizon IPTV gateway on left, and positioned next to old Fios gateway on right

Verizon has been teasing its IPTV service -- which is different from the company's existing hybrid QAM/IP Fios service -- for years, but it unveiled critical new details at Mobile World Congress in February. Notably, Verizon has designed its own hardware for the service, which includes a gateway that combines a home router with an optical network terminal (ONT), and embeds IoT radios. Set-tops include a DVR box and multiple non-DVR clients with wired and/or WiFi connectivity.

On the software side, the new IPTV user interface includes personalization features, support for online video services and integration with voice control technology. A Verizon executive also said in February that the company plans to provide a three-day look-back feature, offering customers without a DVR set-top access to recent TV broadcasts during a short on-demand window. (See This Is the New Fios TV From Verizon.)

Verizon should have had an advantage over competitors in the race to deliver IPTV services because of its existing hybrid video system and the broadband capacity available throughout its fiber-to-the-home footprint. However, the company has dithered for years, failing to make the most of its assets including IP video technology acquired from Intel Corp. (Nasdaq: INTC) in 2014. (See Why Did Verizon Buy OnCue?)

At Mobile World Congress, one Verizon executive told Light Reading that the company's new IPTV service would be commercially available before the end of the first quarter, but another suggested that the launch was likely to be postponed until later in the year. Light Reading has now heard from a third source close to the business that internal discussions suggest the launch has been pushed out until at least September.