Disney+ Gets Ready for Its Close-Up

Set to debut November 12, Disney+ will help form the foundation of The Disney Company's transformation into a direct-to-consumer streaming powerhouse as the traditional pay-TV market continues its decline.

All systems are go for next week's launch, Robert Iger, Disney's chairman and CEO, said Thursday on the company's fiscal Q4 call. 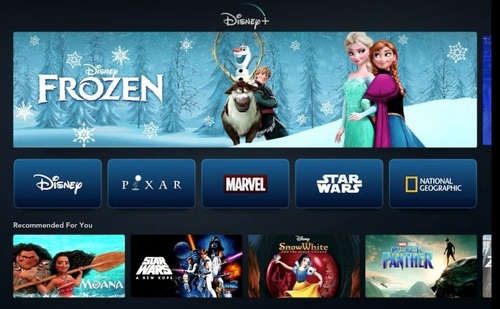 Following Disney+'s debut on November 12 in the US, Canada and the Netherlands, the SVoD service will expand to Australia and New Zealand on November 19, 2019, and the UK, France, Germany, Italy, Spain on March 31, 2020.

Ahead of next week's launch, Disney+ was tested in the Netherlands, providing consumers there with free access to a portion of the library that will be available in the full OTT offering. That offering will start at $6.99 per month or $69.99 per year, or $12.99 per month when it's bundled with Hulu's ad-supported SVoD service and ESPN+.

"We've been very pleased with the results, including the technical soundness and reliability of the platform," Iger said, noting that allowing users to download titles via Disney+ has "also been a big hit."

Iger didn't provide any specific usage numbers from those tech tests, but said the viewing patters in the Netherlands were "encouraging," as the service attracted a broad audience of men, women and kids.

That streaming platform is primarily underpinned by BAMTech, a unit since rebranded as Disney Streaming Services. In August 2017, Disney snared majority ownership of BAMTech when it forked over $1.58 billion to acquire an additional 42% stake, building on its previous stake of 33%.

Going global
Iger also spelled out Disney+'s near-term international expansion plans. Following the service's debut in the US, Canada and the Netherlands next week, it will launch in Australia and New Zealand on November 19. Disney+ is slated to expand into the UK, France, Germany, Italy, Spain and "other countries in the region" on March 31, 2020, the exec said.

Michael Nathanson, senior analyst with MoffettNathanson, forecasts that Disney+ will have 8 million subs worldwide by the end of 2019, and 18 million by the end of 2020. But, in a research note issued Friday, he also allows that this initial subscriber forecast might underestimate the size of the first year launch, given the additional detail on the timing of Disney+'s expansion to more international locales, along with the likelihood of more telco bundles, he added.

With the new service backed by an initial slate of 500 movies and 7,500 individual episodes, including exclusive originals, from Disney-owned properties such as Fox, Pixar, Marvel, Star Wars and National Geographic, Disney's goal is to have 60 million to 90 million subs by fiscal 2024.

"With the launch of Disney+, we're making a huge statement about the future of media and entertainment and our continued ability to thrive in this new era," Iger said.

Expensive transformation
This transformation is expensive, though. Disney's direct-to-consumer and International segment generated a $740 million operating loss in Q4, and that's expected to climb to roughly $800 million in Disney's fiscal Q1.

But Disney's taking the long view as it attempts to mitigate the erosion of its traditional pay-TV and broadcast TV business. To wit, operating income at Disney's media networks unit was down 3% in Q4.

ESPN+ ended fiscal Q4 with more than 3.4 million subscribers, which partly counteracted a 2% drop in ESPN's domestic linear advertising revenue. Hulu ended the period with 28.5 million paid subs, made up of a base of SVoD customers and those who also take Hulu's live TV packages.

Reflective of the fragmentation and shifts occurring in the streaming era, FX is set to "become a key content driver for Hulu," Iger said. Full seasons of more than 40 FX series will be offered on Hulu while new episodes will run on Hulu the day after they run on FX. FX will also produce exclusives for Hulu, with four such series set to debut in 2020.

Distribution partners will add to Disney+'s reach
Although Disney will look for its direct-to-consumer streaming services to help offset drops in its pay-TV business, offerings such as Disney+ are expected to also gain distribution through pay-TV operators and ISPs.

In one recent example, Disney's new deal with Charter Communications "contemplates" future distribution of Hulu, ESPN+ and Disney+. But neither company has announced when those OTT services would be offered by the cable op. Verizon, meanwhile, is offering a year of Disney+ to all new and existing 4G and 5G subs on unlimited wireless plans and to new Verizon Fios home broadband and 5G Home subs.

Regarding the Verizon deal, Iger noted that "we're not just giving [Disney+] away." He said Disney is getting paid "a certain amount" for those customers but declined to specify.