Although Starlink hasn't revealed pricing and packaging for Elon Musk's ambitious low-Earth orbit satellite broadband service, purported speed tests from a group of beta users posted to Reddit indicate that Starlink will be more than capable of delivering a true "broadband" experience, at least as it is defined by the FCC.

The posted, "confirmed" Starlink speed tests were not uniform, but the speeds did rise as high as 60.24 Mbit/s in the downstream and more than 17 Mbit/s in the upstream. The FCC currently defines "broadband" as speeds of at least 25 Mbit/s downand 3 Mbit/s up. 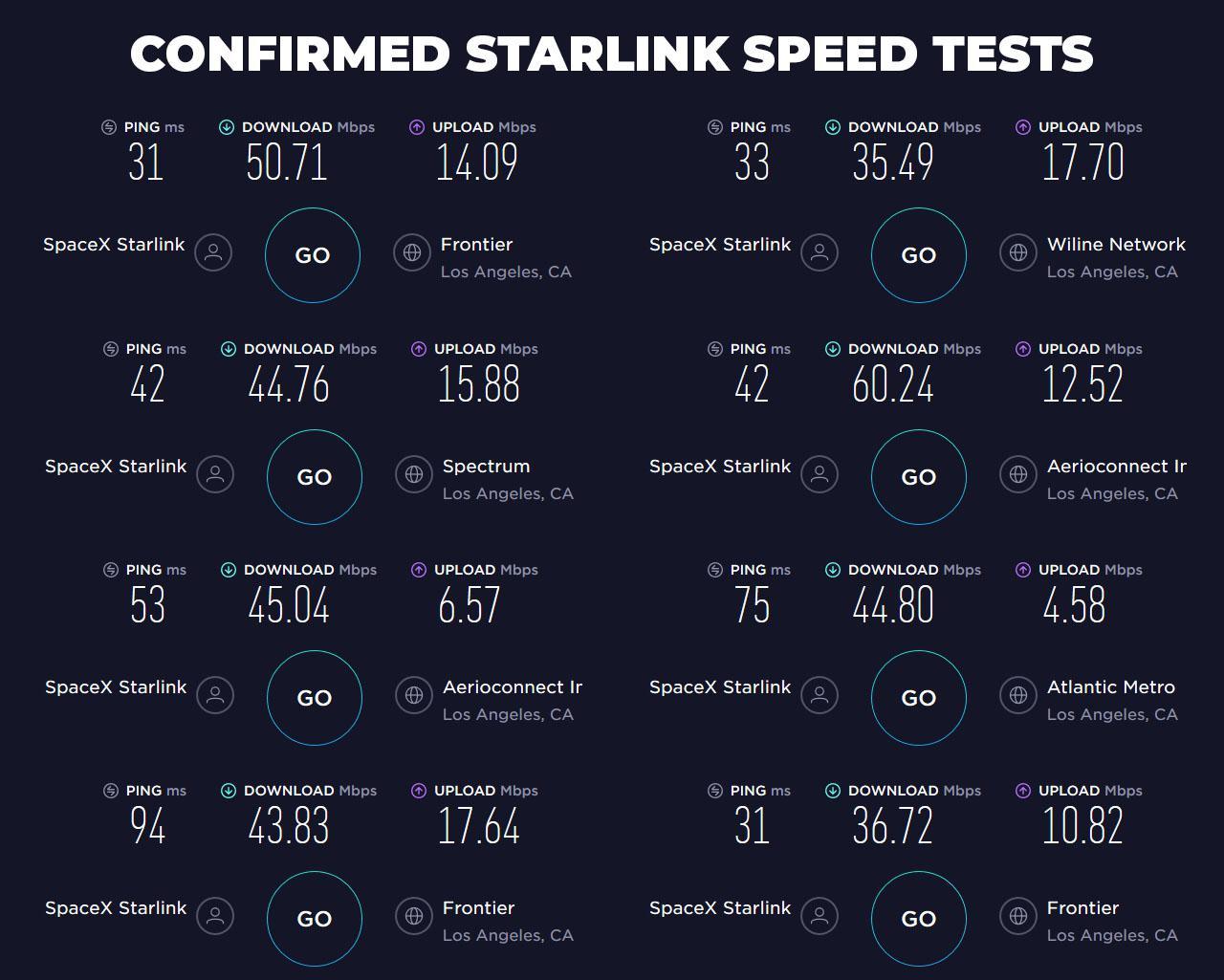 Meanwhile, tests for latency levels  a limitation for high-flying geosynchronous (GEO) satellite broadband services for apps such as online gaming  were shown to be as low as 31 milliseconds for Starlink's expanding LEO constellation.

Telecompetitor notes that Starlink's coverage is currently limited to the Northern US and southern Canada, with the speed tests appearing to originate with beta users in Washington state.

While the tests indicate that Starlink will well exceed the FCC's broadband speed threshold, they are a far cry from what consumers and businesses can get from most terrestrial cable and fiber services, with 1 Gbit/s being the typical high-level target these days. My colleague, Mike Dano, declared recently that Starlink doesn't pose a massive threat to terrestrial service providers.Even Musk himself admits as much, stating in March that "Starlink is not some huge threat to telcos."

Still, Starlink looks like it could present a solid potential competitor in speed and latency to DSL and today's GEO-based, data-restrictive, high-latency satellite broadband services. Viasat, for example, offers speed tiers up to 100 Mbit/s down and up to 3 Mbit/s up, paired with data-usage limits and latencies in the neighborhood of 600 milliseconds.

And, of course, Starlink is a potentially viable option for unserved or underserved rural areas. In a report published this week, the Institute for Local Self Reliance found that almost 50 million Americans live in areas with only one choice of broadband provider. The report didn't consider GEO-based broadband services (citing issues such as high prices and poor latency), adding that there's not enough public data available yet on LEO-based services to factor into its findings.

Curious consumers
Starlink has plans to launch thousands of LEO satellites, establishing a constellation that aims to provide near-global coverage by sometime next year. Meanwhile, the company expects to put up about 1,500 satellites by year-end to cover most of North America.

There appears to be strong curiosity about Starlink, as the company told the FCC that "nearly 700,000" people across all 50 US states have registered their interest despite no formal advertising by the company. As a result, Starlink reportedly has asked the Commission to boost the number of authorized terminals used to connect to the Starlink network from 1 million to 5 million.

The speed tests offer a glimpse at what might come from Starlink, but there's still a lot of missing pieces to the puzzle. Pricing remains a big question, as Starlink has not revealed what it will charge for equipment and the service itself.

Even as the well-heeled Amazon prepares to enter the LEO satellite sweepstakes, it's not hard to find skeptics about the business model for LEO-based services, given their need for a massive number of satellites and low-cost terminals.

"Overall, you have to dig such a big hole in terms of capital to deploy the satellites and the capital to roll out antennas that to be profitable  is really challenging," SES CEO Steve Collar told me in a recent interview.

That said, he still left the door open, wondering if LEO-based systems could play a complementary  rather than leading  role in SES's plan centered on its fleet of GEO satellites and a new array of medium-Earth orbit (MEO) satellites.

Like what we have to say? Click here to sign up to our daily newsletter
COMMENTS
Newest First | Oldest First | Threaded View
Add Comment
Be the first to post a comment regarding this story.
EDUCATIONAL RESOURCES
sponsor supplied content
eBook: Monetize the Enterprise - 6 Ways to Capture the B2B Opportunity
eBook: The 3 Key Digital Mediation Challenges - And How to Solve Them
Case Study: APAC CSP Boosts Efficiency of Enterprise Operations with CSG
vRAN Value Proposition and Cost Modeling
Educational Resources Archive
More Blogs from The Bauminator
Dish's 'killer' firmware update bricks some Slingbox models, users claim