Dish Takes Another Swing at the Smart Home

Three years after its EchoStar unit stumbled with a DIY-focused smart home/security combo, Dish Network is plunging into the smart home and IoT market again with a services unit that performs on-site, pro installations for a range of connected retail devices.

It's not cheap, but the offering (for same-day or next-day service) is clearly focused on Luddites who could use the techno help. 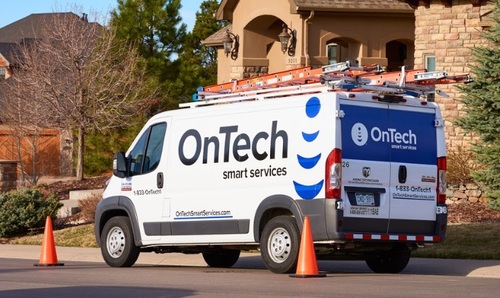 Dish is promising same-day and next-day installs with On Tech Smart Services, initially in 11 major US markets.

Smart thermostat installs (currently focused on Google Nest thermostats) cost a flat fee of $99.99. In addition to dumping the old thermostat, the install includes the connection of the device, setting it up and showing the home owner how to use it. Early on, the new smart home unit can handle pro installs for a variety of smart home or connected products, including Ring video doorbells, Linksys WiFi gear, Wemo lights, Roku boxes, Yale smart locks and audio products from Polk and Klipsch.

The new offering enables Dish, which has seen its pay-TV business struggle, to drive more revenues from its on-the-ground, service installation staff. It also expands the capabilities of Dish's Smart Home Services group, which was launched in 2011 and later added TV mounting, surround sound and home networking help to its list of services. According to Dish, the OnTech team consists of a subset of techs from its In-Home Services group.

Dish's expanding focus on in-home, professional installs of consumer electronics products and smart home devices followed a brief flirtation with the do-it-yourself home security/automation market. Dish's EchoStar unit spent money and effort on a short-lived product/platform called Sage By Hughes. About six months after launching Sage By Hughes in March 2016, EchoStar exited the retail home security and automation market and shut down the service, partly because it was not getting much consumer traction.

Dish's deeper focus on providing installation services for smart home products also enters the picture as it moves ahead with a plan to launch a narrowband-IoT network and, further down the line, seeks to fund and deploy a standalone 5G network.

While EchoStar has bugged out of the DIY smart home market, Charter Communications appears to be inching its way in, hinting in March that it was developing a smart home platform that will debut in a market this fall. Industry sources told Light Reading earlier this year that Charter had held talks with several potential partners for that product, including Ring (now part of Amazon), Arlo (a Netgear spinoff focused on connected cameras, doorbells and lights) and Google's Nest.

Comcast, meanwhile, has focused efforts on integrating its own smart home devices and those from select third parties for its xFi home networking management platform.