Charter in Talks With Ring, Others, About New Smart Home Product

Charter Communications is in talks with Amazon.com Inc. (Nasdaq: AMZN)-owned Ring, as well as Arlo and Nest, as the cable operator moves forward with plans to create, integrate and launch a new smart home/security offering that will emphasize a consumer self-install operations model, multiple industry sources say.

Ring, the smart home device maker acquired by Amazon last year for a reported $1 billion, is said to be a key player in Charter's plans, though the MSO is also holding talks with a broad set of IoT product companies. Among others that Charter is looking at, Arlo is the connected camera company that completed a spin-off from Netgear Inc. (Nasdaq: NTGR) just last week. Google (Nasdaq: GOOG) acquired Nest in 2014 for $3.2 billion. (See Google to Buy Nest for $3.2B.)

Charter Communications Inc. declined to comment on its smart home/security product plans. It inherited a home security business via its deals for Time Warner Cable and Bright House Networks using the "Converge" technology/platform that Comcast acquired from Icontrol in 2017 (Alarm.com bought the Z-wave-focused "Connect" piece of Icontrol portfolio used by ADT Corp. ).

It's not clear how or if Charter's relationship with Comcast regarding home security will change as Charter moves ahead with its plans.

Back in June 2016, Charter said it was continuing to support existing home security subscribers obtained from the TWC and Bright House deals. But it added that it had de-emphasized sales of those legacy products as Charter assessed what to do longer term in the home security/smart home arena.

Charter has not detailed its long-term plans or announced when it might launch a new product into the market. However, a post on Reddit temporarily appeared to show internal documentation from Charter suggesting that it's developing a self-installed, professionally monitored home security service that is "predicated on a deal with Ring." 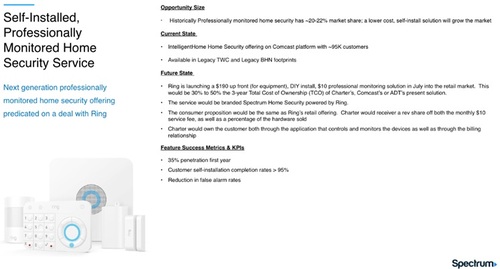 This image, outlining some ideas Charter has in mind for its purported interest in working with Ring, has mysteriously disappeared from the original Reddit post.

Per that document (the source of it has not been independently verified by Light Reading; and, as of January 7, the image has been deleted from the original Reddit post), Charter's legacy product in the market, called IntelligentHome and currently using Comcast's platform, has about 95,000 customers. A "Future State" product from Charter, the document notes, would include Ring, and would charge a $190 up-front cost for equipment, feature DIY installation, and carry a $10 per month monitoring solution fee. Charter, in turn, would get a revenue share of the monthly service fee and a percentage of the hardware sold. Charter would "own the customer" via the app that controls and monitors the devices, as well as the billing relationship, the document notes.

The slide also refers to a product to be called Spectrum Home Security powered by Ring, though it's unclear if that's just a place-holder brand should Ring become a lead tech/product partner for Charter's purported new smart home offering.

The MSO has been pulling material from various smart home vendors as it continues to assess its product plans, sources said.

Ring is one of a group of vendors that Charter intends to work with for the new product/service, sources said. Ring has not responded to a request for comment.

Ring is known for its connected doorbell/camera products but has been expanding its product line. At this week's CES in Las Vegas, the company introduced the fifth in its line of video doorbells -- the Ring Door View Cam, which can ask select Alexa-powered devices to "show me my front door" and to be alerted in real time when motion is detected. Ring also introduced a line-up of smart lighting products that will start to ship in March, as well as Ring Alarm, an expanded range of sensors that can monitor for smoke, carbon monoxide and flooding.

If Charter goes forward with a smart home/security product offering, it would serve as another prime example of how cable operators and other ISPs are thinking strategically about new home connectivity and broadband products aimed at driving new revenues and exploring areas that extend well beyond sheer broadband speeds.

Home monitoring and security a mixed bag for MSOs and ISPs
Home security/automation products are viewed as a retention tool and source of new broadband-related revenue, but have not yet become huge sellers for cable operators and other ISPs. Some of them have either bailed out of that market or tweaked their smart home product offerings significantly in recent years.

Comcast's Xfinity Home product, launched in 2012, has grown slowly. Comcast ended Q3 2018 with about 1.27 million Xfinity Home subs after adding approximately 42,000 in the period. The grand total represents about 2.2% of the residential homes and businesses passed by Comcast.

Verizon Communications Inc. (NYSE: VZ), meanwhile, shut down its Home Monitoring and Control service in 2014, but later introduced TechSure, a different offering focused on providing customer support for various IoT devices for the telco's broadband subs. Sage By Hughes, a DIY-focused, home security and automation service from EchoStar Corp., was shut down in the fall of 2016. (See Verizon Sells Digital Device Support and Verizon Pulls Plug on Smart-Home Service.)

In August 2017, a report surfaced that AT&T Inc. (NYSE: T) was exploring a sale of its Digital Life service. Ever since, AT&T's promotion of that product has been muted. (See Why AT&T May Dump Home Security Biz.)