DENVER -- CNG2019 -- The cable industry unfurled "10G" as the brand that represents the industry's goal to deliver symmetrical 10 Gbit/s speeds in the months and years to come, but cable operators will use a range of wired and wireless technologies to hit that lofty goal.

Notably, 10G is not just about Full Duplex DOCSIS (FDX), an extension of DOCSIS 3.1 that will enable symmetrical 10-Gig speeds.

"10G is a collection of technologies to create a seamless experience all the way to the consumer," Phil McKinney, president and CEO of CableLabs, said this morning during his keynote here. (See CES 2019: Cable's 10G Tech 'Will Work' and NCTA Trademarks '10G' .)

This mix of technologies will include FDX and HFC networks, all-fiber networks, as well as the emerging use of Coherent Optics that will enable long-haul style technologies on the access network. 10G will also include connectivity inside the home. "WiFi 6... we're big on that," McKinney said concerning the next-gen wireless standard. (See CableLabs Announces Point-to-Point Coherent Optics Specifications.) 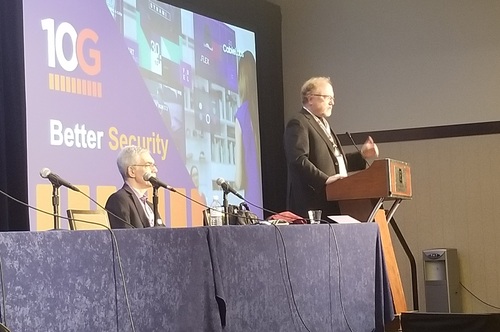 CableLabs CEO Phil McKinney, at the lectern, chats up the industry's "10G" initiative, noting that it's not all about speed, as Light Reading's Alan Breznick listens in.

Though cable operators will use multiple technologies to enable 10-gig symmetrical speeds in the years to come, a big focus of the 10G effort does factor in the work being done with Full Duplex DOCSIS, a technology that's expected to be well into field trials in 2020.

DOCSIS 3.1, McKinney said, "was architected to allow a complete set of extensions" and to "create optionality for the industry."

Beyond speed, extensions are in the works to enable lower latencies on D3.1 networks and to support improved security, he said. One such example of the latter is the work CableLabs is pursuing with its "Micronets" IoT security project. (See CableLabs Erects 'Micronets' Framework for IoT Security .)

Back to speed, hitting symmetrical 10 Gbit/s is not the end-all, be-all result. "We view 10G as one more mile marker as we extend the speed of the network," McKinney said, noting later that CableLabs will be looking at how to achieve speeds of 50, 100 or even 200 Gbit/s.

Using light field display cameras, a 20-minute clip might generate 600 to 800 terabytes of data. Multi-gig data links would be needed, not just to move those files off the camera, but also to move them around for other parts of the post-production process, he said.