China edges closer to chips self-sufficiency despite US efforts

A natural consequence of the US-led clampdown on China's access to Western technology is a renewed Chinese push for self-sufficiency. If we can't obtain it from the Americans or their allies, we'll have to produce it ourselves, you can envisage Xi Jinping, China's latest emperor, telling his lackeys. Billions of Chinese yuan have reportedly been funnelled into the local semiconductor industry as China pursues technological parity and independence.

The hawkish Western response to these spending plans is to throw back one's head, cackle condescendingly and – when the mock tears of mirth have dried – point out that China is years behind the US on semiconductor innovation. This is how Donald Trump and Joe Biden, with a few doddery strokes of the White House pen, were able to cripple Huawei, cutting the telecom equipment maker off from the bleeding-edge components it needs for smartphones and even some network gear. 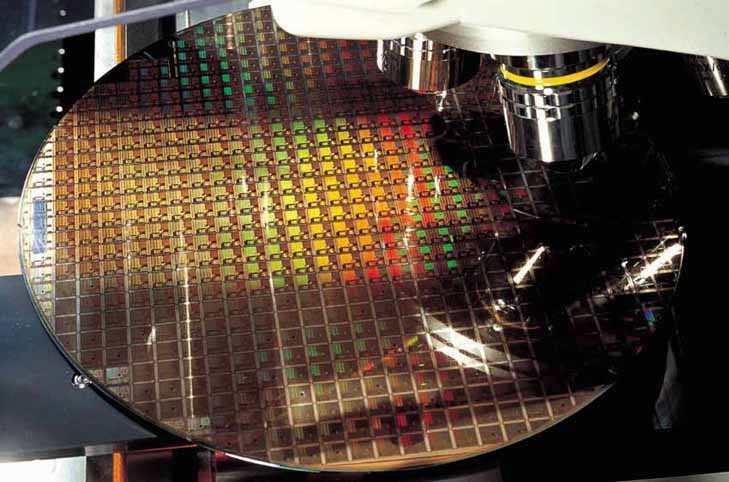 A silicon wafer inside one of TSMC's fabs in Taiwan.
(Source: TSMC)

China's dependency on the West is not immediately obvious. The world's most sophisticated foundries today are Taiwan's TSMC and South Korea's Samsung. But look behind the factory walls and the observer would see rooms full of semiconductor equipment made by US, European and Japanese firms. The electronic design automation (EDA) software used in semiconductor manufacturing is nearly all American. With Huawei, China was previously able to close the technological gap with Western rivals such as Ericsson and Nokia, even overtaking those companies. It has not managed the same feat in chipmaking tools.

So it will alarm US hawks to see that SMIC, a large Chinese foundry, has been able to crank out a chip based on 7-nanometer processes. A nanometer (often abbreviated to nm) is a billionth of a meter and the unit commonly used for measuring the size of the transistors that go into chips. The smaller the process, the more advanced the tech. But this miniaturization is one of the toughest tasks in the industry – so tough that TSMC and Samsung are the only two foundries currently producing 7-nanometer chips.

When DUV will do

The revelation about SMIC comes from an analyst firm called TechInsights, which examined a chip sold by Canada's MinerVa but manufactured by SMIC. The MinerVa Bitcoin Miner SoC, as the product is called, "is the most advanced technology product we have seen from SMIC since we analyzed their 14nm technology," said TechInsights in a report. "This low-volume production product may be the steppingstone for a true 7nm process that incorporates scaled logic and memory bitcells." Widely reported by the mainstream and industry press, the report has been taken seriously by observers.

Many of China's opponents would have assumed SMIC and other Chinese foundries were short of the equipment needed to produce decent 7-nanometer chips. Of utmost importance in the mix are the ultraviolet lithography machines that etch complex, microscopic circuitry into silicon wafers. Only a few companies make these machines, led by ASML of the Netherlands plus Canon and Nikon in Japan. And of those three, ASML has a monopoly in the market for extreme ultraviolet (EUV) lithography, the latest technology. Denied an export license by its own government, ASML is barred from selling EUV machines to China.

This restriction is justified by the Wassenaar Arrangement, an export control regime designed to prevent certain "dual-use" technologies (meaning technologies with civilian and military purposes) from being shipped to "states of concern," including China. There are 42 members, including Japan, the Netherlands and the US. When it comes to ASML and EUV, the aim would have been to stop China from producing its own state-of-the-art chips.

But there is currently no embargo on the sale of older deep ultraviolet (DUV) lithography machines, and ASML's sales to China have soared from about 1.4 billion ($1.4 billion) in 2019 to roughly 2.7 billion ($2.7 billion) last year. They grew again for the recent first half of 2022, rising nearly a fifth, to more than 1.5 billion ($1.5 billion), and accounting for 17% of all company revenues, up from 15% in the year-earlier half. 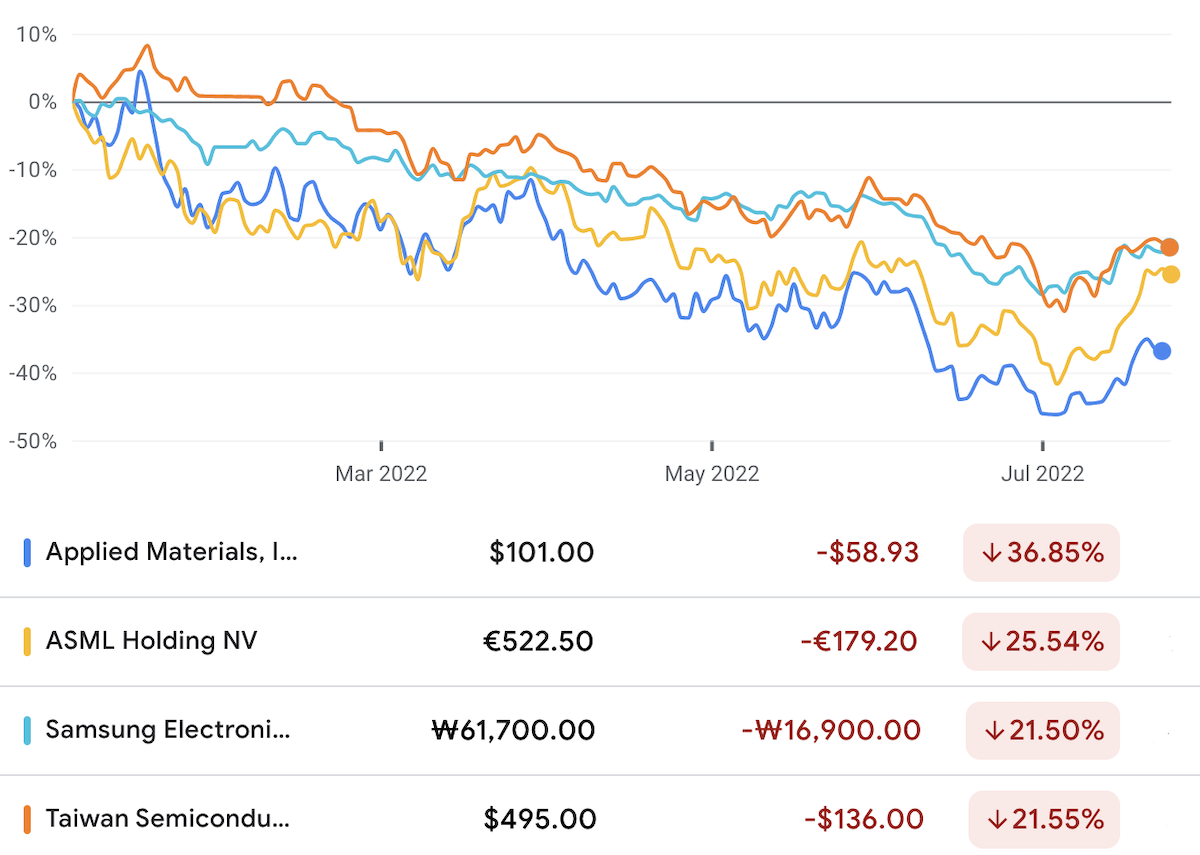 The impression ASML likes to create is that EUV is required for 7-nanometer and even smaller nodes. Asked by email about the feasibility of producing a 7-nanometer semiconductor with DUV machines, it had not provided a response at the time of publication. But Peter Wennink, ASML's CEO, clearly linked DUV to less advanced chips on the company's recent earnings call.

"I think we need to realize that China is an important player in the semiconductor industry and especially in the more – let's say not mature nodes but in the more mainstream semiconductors," he told analysts. "It's everything that has to do with deep UV, yes. And it ranges from 20-nanometer up to 28, 45, 65."

Yet 7-nanometer chips have already been produced with DUV equipment, according to TechInsights in its recent report. Making them without EUV tools is costlier and more complex, but it does not appear to be impossible. "While all the major foundries manufactured technology at 7nm without EUV, variants on the 7nm node saw significant complexity (and likely cost) reductions with the introduction of EUV," said TechInsights.

Regardless, that SMIC – a company on the US trade blacklist (Entity List) – has any kind of 7-nanometer capability is not what China's opponents will want to hear. "For US policymakers, this news will come as a bit of a shock as the US Department of Commerce's idea of putting SMIC on the Entity List was to effectively prevent the company from pursuing advanced process nodes beyond 14nm by restricting their access to ASML's EUV machines," said Leonard Lee, the managing director and founder of next Curve, a US research and advisory firm, in a LinkedIn exchange with Light Reading.

Experts in semiconductor technology might not be surprised by this development. Two years ago, when ASML was trying to obtain an export license for EUV, there had been warnings that SMIC would conceivably be able to rely on DUV technology instead. "In essence, although there are cost benefits of using EUV at 7nm, DUV can readily replicate 7nm patterns," said Robert Castellano, the president of a consulting and advisory group called The Information Network, in an article for Seeking Alpha. His view at the time was that SMIC might already have closed the gap through a system it calls N+1, offering major performance improvements compared with 14-nanometer processes.

But Lee says parts of the industry have been largely dismissive of SMIC's N+1 claims. "Those skeptical of SMIC's abilities deemed that the use of older DUV lithography equipment in pursuit of 7nm would present prohibitive yield issues and challenges economically scaling N+1 production," he told Light Reading.

Nevertheless, for the Chinese market, a costlier and less feature-rich advanced chip is better than no chip at all, and SMIC is now thought to be working on an update called N+2 that would address some of the performance issues associated with N+1. "If SMIC is able to continue improving their N+1 and fabled N+2 manufacturing processes, this is good news for China's semiconductor self-sufficiency aspirations," said Lee.

It would be especially welcome to Huawei. Cut off from TSMC and Samsung by US trade sanctions, it reported a 29% drop in revenues last year, partly because of problems obtaining advanced semiconductors for its smartphones. Although its carrier division is less exposed, the latest baseband equipment in mobile networks relies on both 7-nanometer and 10-nanometer technology, according to Michael Begley, the head of product line 5G RAN compute for Ericsson, Huawei's biggest 5G rival. "As soon as you put computing functions into the radio, you need to be on the latest process node or you are going to have a very big and bulky radio," he previously told Light Reading.

US firms in for hard landing

Concern about SMIC's growing capability might explain why the US is now reported to be seeking restrictions on the sale of DUV technology to China. "I mean, it's been on the table from time to time," said Wennink when asked about that risk on his company's recent earnings call. "We just have to wait for what the politicians come up with."

The thought of a DUV ban now conjures words like "horse," "stable door" and "bolted." What's more, Western semiconductor and component firms have been growing their sales to China in the last few years despite a supposed tightening of US sanctions. Applied Materials, Lam Research and KLA, three US companies that produce fab equipment, made a combined $4.2 billion from sales to China in 2017. Last year, the figure had soared to $14.5 billion. EDA firms Synopsys and Cadence grew China sales from $564 million in 2019 to $941 million last year. While SMIC is on the Entity List, numerous other Chinese semiconductor firms are not. YMTC, a memory chip maker, is thought to count Applied Materials as its biggest supplier.

What US authorities probably don't want to acknowledge is that cutting China off completely would now endanger US tech heavily reliant on Chinese business. Applied Materials, for instance, currently derives a third of its revenues from China and would struggle to maintain research-and-development spending at historical levels if those sales abruptly vanished.

Even if the US does not implement tougher restrictions, the likes of Applied Materials could be in trouble as Chinese foundries opt instead for increasingly capable Chinese suppliers. Castellano, who has been ahead of the curve on this subject, drew attention in a recent Seeking Alpha blog to several Chinese companies that make fab equipment. Applied Materials now faces Chinese competitors in each of its equipment sectors and many sell equipment capable of 5-nanometer patterning, he said.

Nor does he have much sympathy for US policymakers and SEMI, a lobbying group for the semiconductor industry whose members include Applied Materials and ASML. "The greed exemplified by SEMI on behalf of its members and US sanctions have accelerated the determination and resolution for China to excel," he said.

Almost implicit in the US trade restrictions is a view that cutting China off from US technology will hamper its development. But it would be arrogant to think a wealthy superpower of 1.4 billion people can never catch up. The irony is that relatively weak sanctions have convinced China of the need for self-sufficiency while allowing it to continue buying Western expertise. This month's news will stoke US fears that China is closing the gap fast – and that US companies will suffer a hard landing when it does.