T-Mobile reported preliminary quarterly results that surpassed most financial analyst expectations  and the company's figures showed that it has managed to significantly stem the exodus of Sprint's customers.

"It's a testament to what Sprint customers are experiencing" under T-Mobile's network and management, proclaimed T-Mobile CEO Mike Sievert in comments at an investor event this week. He spoke shortly after the release of T-Mobile's initial fourth-quarter customer metrics.

Specifically, T-Mobile reported that its postpaid phone churn was 1.03% in the fourth quarter of 2020. Churn is the measurement of the number of customers who leave a carrier; Sprint routinely reported the highest churn figures of all the national wireless network operators.

In a note to investors released shortly after T-Mobile's announcement, the financial analysts at New Street Research pointed out that T-Mobile's latest churn figures were "down dramatically year-over-year."

"Given that Sprint postpaid phones account for 35-40% of the combined company and had churn of 2.06% in 4Q19, results imply that T-Mobile has managed to lower Sprint churn by at least 60 bps [basis points] this year, roughly quadruple the churn reduction seen at the incumbents," the New Street analysts explained. "This is especially remarkable considering that churn had been increasing 20 bps per annum at Sprint prior to the merger. Moreover, there is likely still a roughly 60 bps gap between churn of legacy Sprint and legacy T-Mobile subs, suggesting further room to improve net adds from reducing churn among legacy Sprint subscribers." 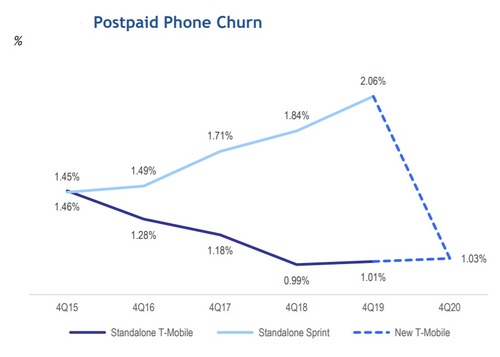 T-Mobile reported dramatic improvements to the churn it managed via its acquisition of Sprint in April. Click here for a larger version of this image.
(Source: New Street Research)

"We just blew it away," Sievert boasted of T-Mobile's results. "We're outgrowing everyone in this industry."

Other major mobile providers are scheduled to report their own fourth-quarter results in the coming weeks.

Sievert argued that "news is sinking in about our emerging network leadership," which he said is helping to drive customers to T-Mobile. But he also said that overall sales in the industry have been sluggish due to the pandemic.

On the network side of things, T-Mobile reported that its nationwide 5G network now covers fully 280 million people across nearly 1.6 million square miles. And the operator said its Ultra Capacity 5G network, which mostly works in the 2.5GHz midband spectrum that T-Mobile acquired from sprint, now covers 106 million people.