According to a new report from Opensignal, 5G users in the US consume almost twice as much data as 4G users.

"Opensignal data shows that 5G users on average consumed much higher amounts of mobile data compared to 4G users, suggesting that, by having a better experience, users consumed more content on their smartphones, or similar amounts of content at higher quality and resolution," wrote Opensignal's Francesco Rizzato in a post on the company's website. The company tracks network usage around the globe. "In some cases, 5G users might even be prone to use their smartphones for tethering as they might find their 5G connection is now multiple times faster than their fixed home broadband solution. Such a surge in mobile data usage on new uncongested spectrum represents a new opportunity for savvy operators to monetise the billions of dollars being invested in 5G."

However, there are plenty of caveats to Opensignal's findings.

First, the US trailed most other countries in the 5G-4G calculation. For example, 5G users in Japan consumed 2.6x the amount of data as their 4G counterparts. And 5G users in South Korea consumed more than twice as much data  38.1GB  as users in the US. 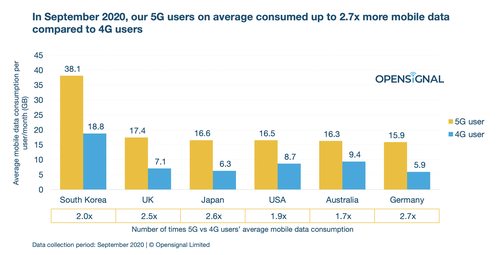 Opensignal noted that the differences may be due to the speeds available to users in various countries, and that 5G speeds are often determined by the amount of spectrum operators can apply toward 5G.

"US carriers have had to work around limited spectrum availability," Rizzato noted. "While all three have launched 5G using new mmWave spectrum, the widest 5G reach has been enabled by repurposing existing 4G spectrum to offer 5G services on low bands (e.g. 600MHz or 850MHz) or midband 2.5GHz 4G spectrum."

It's also important to point out how operators may be gaining revenues from the sale of 5G. For example, in South Korea operators charge extra for 5G connections. But in the US, operators simply package it into their existing, top-tier unlimited plans.

Finally, it's worth noting that consumers who purchase 5G-capable phones may also be the ones interested in cutting-edge services and therefore may naturally consume more data than consumers content with 4G phones.