The ink is just beginning to dry on the FCC's initial $9.2 billion Rural Digital Opportunity Fund (RDOF) auction, but some in the telecom industry are already raising questions about the entities receiving funds, what they plan to spend it on, and whether they might be able to effectively cross the digital divide.

"Confusion and corruption may just be beginning," wrote Christopher Mitchell, director of the Community Broadband Networks Initiative with the Institute for Local Self-Reliance (ILSR), on the group's MuniNetworks website. Mitchell raised a number of questions about how some of the auction's biggest winners might effectively deploy a range of telecom technologies in rural areas.

And Mitchell isn't the only one signaling concerns.

"Not feeling quite as bullish about this final outcome for RDOF," tweeted Shirley Bloomfield, the CEO of the NTCA rural trade association.

"We started poking around the FCC's maps of winning RDOF bids, and there's enough smoke to suggest a fire," wrote S. Derek Turner, a research director at public-interest group Free Press, in a lengthy post to the association's website. Turner pointed to a number of locations receiving RDOF funds that may not be considered rural areas needing connectivity.

Indeed, some financial analysts even raised questions about the logistics governing the FCC's RDOF auction. "We have heard rumblings from bidders that there is significant unhappiness with the auction," wrote the financial analysts at New Street Research in a note to investors issued just prior to the agency's release of the auction's winning bidders. "We are not sure of the causes ... but we have heard suggestions of software errors, predictions of significant defaults caused by winners being stuck in places they don't really have an interest in, and results where the actual subsidy is minimal so that the aggregate amount the FCC will use could end up being significantly lower than the allotted $16 billion."

In announcing the RDOF winners, the FCC did not mention any such concerns. The FCC's "quiet period" rules prevent RDOF participants from speaking publicly about the auction.

Nonetheless, Doug Dawson with CCG Consulting predicted that the RDOF auction "is likely to be a disaster before it's over." He argued the FCC may be forced to backtrack if RDOF winners can't sufficiently explain how they will build telecom networks in rural areas with the money they won through the RDOF auction. (The FCC's RDOF program is a reverse auction where companies and entities that submit the lowest bid for covering a particular area win  however, then they're on the hook to cover that area with broadband services.)

The financial analysts at Raymond James also pointed out that many of the big winners in the FCC's RDOF program  including LTD Broadband, SpaceX and Starry  are relatively new and untested entrants in the telecom space.

"One meaningful point for the Brave New Entrants is their lack of experience with running communications networks, and the requisite customer care and billing systems required for a monthly recurring revenue business that serves small customers," the Raymond James analysts wrote in a note to investors shortly after the FCC identified the winning RDOF bidders. "At the end of the day, dealing with an unsophisticated end user customer with relatively small bills each month, has bad debt risk, consumer service obligations, and generally gets sympathy from local news outlets and regulators is a challenge if you haven't done it before. Incumbent wireless providers, and even cable and electric entrants have significant advantages in this regard, whereas a startup WISP [wireless Internet service provider] or satellite provider (who has never sent out an invoice for less than 7 figures) have to build this while constructing a network, marketing to customers, etc., and they are not benefiting from scaling existing systems and infrastructure. Not an insurmountable task, but it adds risk and complexity with the 'free money.'"

Indeed, one analyst pointed out that the biggest winner in the FCC's RDOF auction  LTD Broadband, a fixed wireless Internet provider in Minnesota, Iowa and Nebraska, that will receive a whopping $1.3 billion in RDOF money  registered for the event using a Gmail email address rather than a standard corporate address.

But Corey Hauer, LTD Broadband's CEO, pushed back against such concerns. "We're going to put proof in the pudding," Hauer told the MinnPost in Minneapolis. "I understand there's naysayers and naysayers can be proven wrong."

Interestingly, longtime telecom provider Shentel walked away with around $500,000 in RDOF winnings. The company also recently disclosed exactly how much it costs for Shentel to cover customers in its rural areas with fiber (via its "glofiber" brand) and with fixed wireless Internet services (via its "beam" brand). 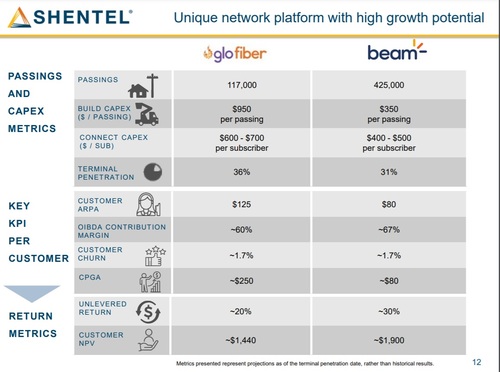 Vendors, of course, are only too happy to sell their products to winning RDOF bidders in order to help them meet their obligations.

Too early to fret?

Finally, at least one industry player argued that it's too early to start raising questions about the ultimate success of the FCC's RDOF auction, considering winning bidders still need to provide the FCC with the details of how they expect to meet their RDOF coverage requirements, and then still have six years to actually deploy broadband services.

"Even now we see hand-wringing over the results before the ink on the results is dry. This is no surprise. Indeed, we saw the same thing years ago over the ability of certain CAF winners to perform and scale," wrote Claude Aiken, CEO of the Wireless Internet Service Provider Association trade group.

The FCC's RDOF auction is based on the Connect American Fund (CAF) auction that also allocated money for crossing the digital divide.

"The FCC's long-form process [which requires winning bidders to lay out their deployment plans] asks hard questions of presumptive winners, thoroughly vetting program applicants' proposals to ensure they are capable of meeting the program requirements," Aiken added. "Early prognostications about the ability of certain winners to perform are judging the book by the first word of its title, potentially harming the program by impacting their ability to obtain additional capital or other regulatory approvals."

Concluded Aiken: "Hot takes that burn down opportunity for rural Americans who need high-speed broadband should be unwelcome in any case."