Google Fiber's speediest offering, a service that delivers 2Gbit/s downstream and 1Gbit/s in the upstream, has reached San Antonio, where the ISP duels with AT&T, Charter Communications and Grande Communications. 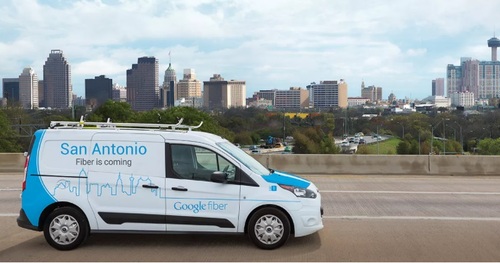 Google Fiber said "many parts" of the company's service area in San Antonio now have access to the uncapped 2-Gig service, as execs announced in this blog post. Google Fiber, they added, is working on technical requirements to make the speedy offering available in some parts of San Antonio that were part of the early fiber network build there.

Google Fiber said it expects 2022 to be its biggest build year yet since it started constructing its network in San Antonio. Google Fiber announced San Antonio as a deployment city in August 2015.

Currently, residents in parts of the west, east, north and northwest sides of San Antonio can sign up for Google Fiber service, with construction crews now at work filling in areas on the northeast, northwest and inner westside of the city.

"Once we've completed these portions, we'll continue building out across the city including communities on the south and west sides," the company added. "This year, working closely with our local government partners, weve picked up the pace of our construction efforts significantly."

Google Fiber's 2-Gig service will also be offered in West Des Moines, Iowa, where the company is grappling with Mediacom Communications. The company announced last month that it had begun to place fiber in the city's conduit network.

Google Fiber limits speeds to 1-Gig up and down in its Webpass markets, delivering fixed wireless service to parts of Chicago; Denver; Miami; Oakland, San Diego and San Francisco, California; and Seattle.

Google Fiber introduced the 2-Gig service in September 2020, with initial tests with customers in Nashville and Huntsville.