Interview Craig Matsumoto, Editor-in-Chief, Light Reading 3/19/2013
ANAHEIM, Calif. -- OFC/NFOEC -- Coriant, the private company being built around the Nokia Siemens Networks (NSN) optical business, doesn't technically exist yet. NSN's deal to sell that business to Marlin Equity Partners has to close first, and that's due to happen by July. In the meantime, though, Coriant is using OFC/NFOEC to introduce itself to analysts and the media. The company set up shop, so to speak, in a boardroom on the fourth floor of the Anaheim Hilton on Monday. Light Reading snagged the first interview appointment and, with it, the first Coriant business card ever handed out by Herbert Merz, the NSN executive who's designated as Coriant's president and CEO. 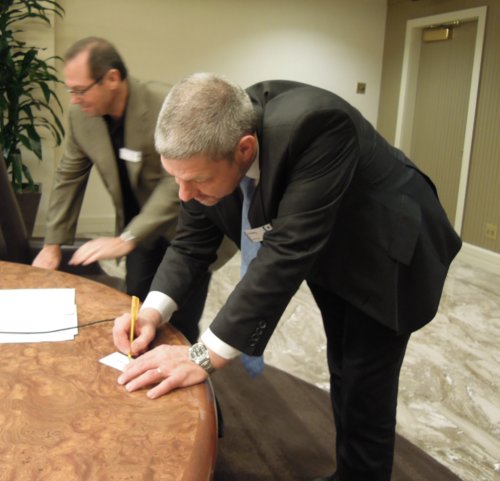 Merz signed his historical business card, on the condition we wouldn't sell it on eBay
Coriant isn't starting from scratch. It has a portfolio including WDM gear, OTN switching and software, plus more software that Marlin acquired from Sycamore Networks. And it's got some noteworthy customers, such as AT&T Inc. and, as highlighted in a Monday announcement regarding 100Gbit/s transport, TeliaSonera International Carrier (TIC). Coriant will enter a market that hasn't been so kind in terms of margins and profitability. So now what? We only had half an hour, but we got an idea of why Coriant thinks it can become the No. 2 optical vendor and, of course, a player in software-defined networking (SDN). (One note: The executives talk about Coriant's plans in the present tense, but there's a tacit "after the deal closes" in each of those statements.)

Coriant's lead team -- or, they will be, once Coriant gets going. From left: Uwe Fischer, Patrick DiPietro and Herbert Merz
— Craig Matsumoto, Managing Editor, Light Reading
1 of 4
Next Page