US Cable Broadband Still Has Ample Room to Grow  Analyst

Despite being challenged by FTTP-powered services in various pockets of the market, the US cable industry still has plenty of room to expand its all-important broadband business over the next five years, MoffettNathanson concluded in a new report that resets the road ahead based on the competitive landscape.

"Our revised forecasts suggest there is a longer growth runway ahead for cable than contemplated in our prior forecast," industry analyst Craig Moffett explained in a report issued Monday.

His revised growth forecasts for the nation's two largest cable operators -- Comcast and Charter Communications -- are relatively small. However, his revisions on the two other publicly traded MSOs Moffett covers -- Altice USA and Cable One -- indicate they will rake in many more subs that previously expected. And some of that has to do with the degree of fiber-to-the-premises (FTTP) competition -- or lack thereof -- they face in their respective service footprints.

Based on a new analysis adjusted for the completion of AT&T's FTTP build, Altice USA has FTTP competition overlap in 42% of its cable footprint, compared to Comcast (34%), Charter (30%) and Cable One (8%). 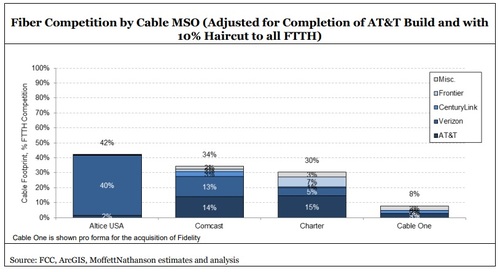 Of the US MSOs included in the study, Altice USA is a bit of a special case. The operator has an FTTP network upgrade underway in its Optimum (former Cablevision Systems) footprint in New York, Connecticut and New Jersey, where it competes head on with Verizon Fios. However, its more rural Suddenlink footprint doesn't face nearly as much FTTP competition. Given that scenario, Moffett expects the bulk of Altice USA's broadband growth upside to originate from its Suddenlink footprint.

With all forms of competition factored in, Moffett sees Comcast's long-term "terminal" broadband penetration at 60%, compared to Charter (61%), Altice USA (60% -- 72% for Suddenlink and 53% at legacy Cablevision); and 71% for Cable One. In all instances, Moffett expects those terminal penetration rates to be higher than estimated current penetrate rates for each cable operator studied. 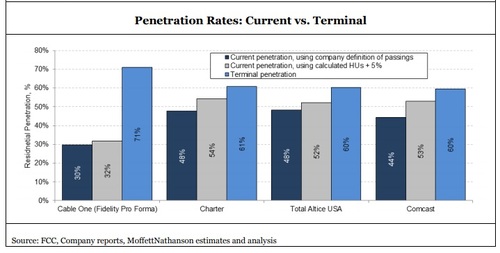 From a broader market standpoint, Moffett now sees US cable snapping up 73% of the market where operators face off against various flavors of DSL, versus previous expectations that cable operators would gobble up 63% of that segment of the market.

Where MSOs face off with fiber-to-the-premises (FTTP)/fiber-to-the-home (FTTH), Moffett now assumes a 50/50 split, compared to a previous forecast that FTTP would get 60% of the market. He attributes that adjustment in part to the speeds and other broadband performance boosts cable operators will be able to squeeze out of their widely deployed hybrid fiber/coax (HFC) networks. While DOCSIS 3.1 is capable of supporting multi-gigabit speeds, the new specs being developed, DOCSIS 4.0, put HFC on a path to support symmetrical 10Gbit/s speeds alongside low-latency capabilities. 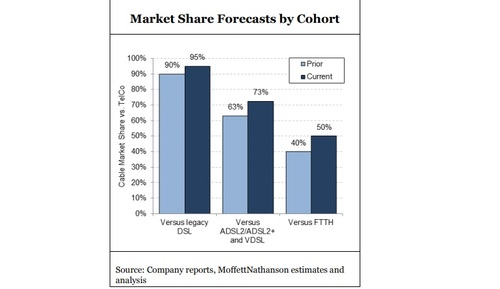 "We expect there to be no meaningful functional difference, at least to end users, between FTTH and cable's DOCSIS 3.1 and, soon, DOCSIS 4.0, offerings," Moffett wrote. "In short, there is no longer a reason to assume that cable broadband is a disadvantaged technology even versus FTTH."

Fixed wireless skepticism
Moffett's latest analysis of the US broadband market does not include any share assumption for fixed-wireless broadband (FWBB).

Moffett also acknowledged that the study also ignores pricing, which varies by operator and difficult to forecast how pricing will evolve in the years go come. "It is almost certainly the case that price matters; by ignoring it, we are implicitly assuming that terminal market share will turn out the same way in similar cohorts for different operators even if the pricing dynamics in each are completely different," he explained.

"[I]t is increasingly clear that Cable's share gains are coming now from the 'middle tier' of TelCo speeds," he wrote. "The legacy DSL pool is being rapidly depleted, but as it has declined, TelCo gains in the middle tier have turned to losses, funding continued Cable growth."

investoxpert 12/17/2019 | 1:01:31 AM
Godrej Forest Grove Marmurdi Godrej Forest Grove Marmurdi connects seamlessly with other small areas like Wakad, Hinjewadi, Aundh, etc., due to the fact that township is present at the intersection of old NH-4 Highway, Mumbai-Pune Expressway and Katraj-Dehu Road. The metro station is coming up at stone throw away and other social infrastructure facilities like schools, colleges, hospitals, hotels and restaurants, railway station, bus stand, banks and financial institutions are present within the radius of 10 KMS. Thus, be ready to experience one-of-its-kind living experience in this township project by Godrej Group. What are you waiting for now?
Reply | Post Message | MESSAGES LIST | START A BOARD

investoxpert 12/17/2019 | 1:00:32 AM
Godrej Forest Grove Pune The size of 2 BHK apartments varies from 569 square feet to 678 square feet. These are thoughtfully designed spaces, therefore there is no dearth of natural lighting, free flow of air and natural greenery. Godrej Forest Grove Pune is an epitome of natural and beautiful greenery. When you are inside the gated premises, you need not take any break to rejuvenate your senses. Simply spend some time in 6 acres of central park amidst tree plantations and 100 fruit-bearing trees and you will feel connected with nature at every step. The modern facilities like swimming pool, gymnasium, tot lot, basketball court, senior's corner, kid's pool area, grocery store, pharmacy store, etc., are also present for residents' entertainment.
Reply | Post Message | MESSAGES LIST | START A BOARD

investoxpert 12/17/2019 | 12:59:35 AM
Godrej Forest Grove If you are looking for 2 and 3 BHK apartment in Pune at a strategic location and in an affordable price range, Godrej Forest Grove is the smart choice. It is an upcoming residential project in Marmurdi, Pune that promises to offer the natural living experience to every resident. Simultaneously, the project promises to keep residents connected with the smart city of Pune with well-developed network of public transportation, highways and metro. Interestingly, the highlight point of the project is affordable pricing that starts from INR 42 lakh onwards.
Reply | Post Message | MESSAGES LIST | START A BOARD

investoxpert 12/17/2019 | 12:58:20 AM
Godrej Forest Grove Marmurdi The special features of Godrej Forest Grove Marmurdi are video door phone facility, solar water provision in master bed's restrooms and inverters within the flat. It is not wrong to tout this residential project as the natural green heaven as a large area inside the gated society is reserved for 6 acres of central park, 1 Km natural trail with 150+ trees, 1100 tree plantations and 100 fruit-bearing trees in the orchard of the premises. All luxurious facilities right from gymnasium, amphitheatre, basketball court, box cricket, swimming pool, senior's corner and retail outlets of pharmacy store, grocery stores and ATM's are available within the gated premises.
Reply | Post Message | MESSAGES LIST | START A BOARD

investoxpert 12/17/2019 | 12:56:28 AM
Godrej Forest Grove Pune Marmurdi is a small town on the outskirts of Pune but it is well-connected with other towns and social facilities. Schools, colleges, entertainment centers, hotels and restaurants and hospitals are located in the vicinity and require maximum 20 minutes' drive from the project. Mumbai-Pune Expessway and Akurdi Railway Station are located at a distance of 5 minutes. Even Pune railway station is easy to reach in less than 1 hour. Thus, live in Godrej Forest Grove Pune to lead a cleaner and healthier life without compromising on the comfort factor.
Reply | Post Message | MESSAGES LIST | START A BOARD

investoxpert 12/17/2019 | 12:55:19 AM
Godrej Forest Grove What can be more exhilarating than spending the rest of the life in a smart city like Pune that too in a residential project located strategically at Marmurdi? The Godrej Properties is coming up with a mega project, Godrej Forest Grove where prospective homebuyers can book their 2 or 3 BHK units. It is a green project as the natural greenery is the highlighting feature of these beautifully designed homes. An earthquake resistant framed RCC structure is aesthetically transformed into modern living spaces. Vitrified tiles, granite countertop in kitchen, antiskid tiles along with water-efficient CP fittings in bathrooms are some of the salient features.
Reply | Post Message | MESSAGES LIST | START A BOARD