The UK's fiber gap is not closing fast enough

Years before it bungled its response to COVID-19, the UK was accused of bungling its approach to fiber broadband. Until recently, it had resisted investment in full-fiber networks as if they were a sinister European Union plot to take control of UK telecom. It languished at the bottom of fiber rankings, behind dedicated plodders like Italy and Croatia.

Some important funding announcements and a regulatory shake-up later, and the UK is on the rise. Data just released by the FTTH Council Europe, a lobbyist for full-fiber technologies, identifies it as one of the five fastest-growing markets in Europe, behind Belgium, Ireland and Switzerland but ahead of archrival Germany. Are the days of full-fiber ignominy over?

The data is a tad old, unfortunately, charting the year to September 2019. But it does show that UK operators took networks past another 1.4 million homes in that period, to about 4.25 million. That means UK networks covered 15% of homes in September last year, according to the FTTH statistics (which appear to come from IDATE, a French market-research firm).

This still puts the UK a long way behind other big European economies. Fiber networks covered 86% of Spain and 57% of France in September last year. In percentage terms, Nordic and Baltic countries were in the 90s range. Even Italy was at 31%. But the UK has come a long way since September 2018, when fiber coverage was just 10%.

Where the UK does rather less well is on take-up. Just 18% of homes passed were actually subscribing to full-fiber services in September, says IDATE, compared with 63% in Spain and 45% in France. This means just 2.8% of all UK households were using full-fiber services in September 2019. In a comprehensive ranking prepared by IDATE, only Serbia and Austria fall below the UK. 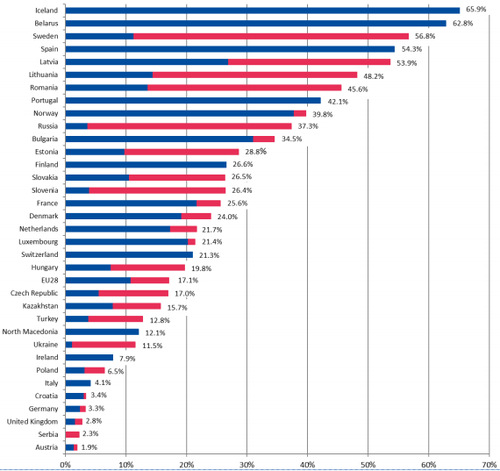 The disparity is reflected in figures recently published by BT, the UK's biggest operator. At the end of last year, its full-fiber network reached nearly 2.2 million households, and yet only 465,000 were paying for a service. By contrast, the entire broadband network was used by about three quarters of the 28.3 million premises it passed.

Building expensive new networks is pointless if they remain unused, and the lack of business presents BT with two immediate problems. First, while customers and wholesale partners continue to rely on part-copper networks, it cannot switch them off and realize savings. An issue before the outbreak of COVID-19, this will be an even greater concern while the UK remains in lockdown and BT's earnings come under pressure. Second, BT is not making a return on the full-fiber investments it has made.

It is still early days, of course, and there are some encouraging signs. While the overall number of broadband connections rose just 1% last year, full-fiber subscriptions were up 74% (albeit from a low base). The risk is that COVID-19 upsets this momentum. Cash-strapped customers worried about their jobs will be in no mood for costly broadband upgrades, and BT will be wary of generous price cuts.

For BT and the UK's other fiber investors, the other big challenge is to maintain the pace of deployment. Before the virus struck, BT was aiming to reach 4 million properties with its full-fiber network by March next year and passing about 26,000 homes every week. At this rate, it would fall slightly short of its of 2021 target. But even that will be hard to manage if there are supply chain constraints and staff fall sick. Nor is accessing properties likely to get any easier.

"We are trying to build whole areas and that means we can't bypass MDUs [multi-dwelling units," said Catherine Colloms, the managing director for corporate affairs at Openreach, BT's networks division, during a conference in London last June. "We currently find we can't access about 44% of MDUs  This issue of absentee landlords is critical."

The rollout of full-fiber networks may seem low on the priority list right now. Existing UK networks, after all, have coped admirably with the COVID-19 traffic surge. But IDATE's data shows it was already playing catch-up with other parts of Europe, and BT's proves it was struggling to boost adoption. In a rapidly digitizing world, that lag could look even worse on the other side of this crisis.