Digicel is on life support in its Caribbean hideout

It provides telecom services in some of the sunniest parts of the planet, but Digicel's financial affairs are usually hidden in the dark.

Visitors to the investor relations page of Digicel's website are dutifully warned that financial details of the privately owned company, which operates networks across 31 countries in the Caribbean, Central America and the Pacific, are off limits to all but "authorized institutions." Yet hideouts are harder to secure in a market downturn. Coronavirus has now picked the lock of Digicel's private chamber and exposed its financial malaise to all.

Amid reports it has filed in New York for bankruptcy, documents sent to the US Securities and Exchange Commission reveal Digicel is slowly being crushed by about $7.4 billion worth of debts. Its answer is to propose a restructuring that would reduce this amount by $1.7 billion, slashing cash interest payments and extending its maturities. Without this, Digicel might not survive in its current shape. "Consummation of this transaction is key to the long-term sustainability of the group," it says in one filing. 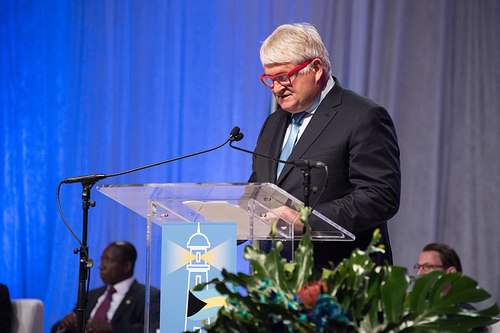 While Digicel's problems did not start with coronavirus, the pandemic has made them critical. It now anticipates some kind of financial impact in the current April-to-June quarter. That could push up its pre-tax losses, which more than doubled in the last March-ending fiscal year, to $154.7 million.

Just what has gone wrong at Digicel? Founded in 2001 by Irish billionaire Denis O'Brien, whose net worth is currently estimated at $3 billion, Digicel last year made about $2.3 billion in sales, as well as an operating profit of $479 million. Sales have been falling, however, due to a decline in the voice business that other activities have failed to offset.

Despite this mounting pressure, Digicel has splurged money on capital expenditure to build cable TV and broadband networks. During a conference in Frankfurt in 2016, John Quinn, its chief technology officer at the time (he left the company late the following year), talked up Digicel's rollout of a full-fiber network that already reached about half a million homes across Barbados, Jamaica and Trinidad and Tobago. His own Digicel service, he said, was delivering two-way speeds of 900 Mbit/s, lightning fast compared with rates in wealthier markets. To emphasize the point, Digicel recruited Jamaican sprinter Usain Bolt for an advertising campaign.

But the investment program has chewed into free cash flow and hindered Digicel's ability to slash financing costs, which rose by $55.4 million last year. Digicel tried to cut these in January by negotiating a new debt repayment schedule, and yet it still owes about $1 billion to creditors next year. In total, it needs to repay or refinance about $4 billion "over the near-to-medium term."

Under its latest, complicated proposal, Digicel would set up a new holding company, called Digicel Group 0.5 Limited. By swapping existing notes for new, lower-value securities, this would essentially ask bondholders to write off money they are owed. Fitch Ratings describes the move as a "distressed debt exchange."

It also warns of challenges for Digicel International Finance Ltd (DIFL), the part of Digicel that looks after Caribbean operations. "The proposed debt, along with the company's stagnant operating performance, and the company's inability to refinance debt at any other level, make it likely that leverage at DIFL will continue to increase." Fitch is to reassess Digicel's credit profile when the debt restructuring is complete.

In the meantime, China Mobile is rumored to have an eye on Digicel's Pacific assets as it tries to extend its influence in the region. To counter that expansion, a rival US-Australia consortium might also tender a bid, according to a report in Australia's Financial Review. A debt restructuring at Digicel, notes that report, would improve the company's bargaining position.

Digicel's difficulties could prompt a rethink about expensive capital projects, especially in low-income markets badly hit by the coronavirus. As noted in 2016, building fiber networks in areas of low-rise housing will have been costly. Persuading customers to spend heavily on broadband services would have been difficult, too. Even now, Jamaica's annual GDP per capita, at purchasing power parity, is less than $10,000, according to World Bank data. In the US, it is more than $60,000.

Market watchers are right to think of telecom as an industry less susceptible to coronavirus than other parts of the economy. But it is certainly not immune. For companies that were already struggling, Digicel's dilemma shows just how dangerous this pandemic could be.