In 2020, the companies that provide smartphone services collectively spent about $42 billion on radio access network products, according to the latest numbers from Omdia, a market-research firm and sister company to Light Reading.

In recent years, most of that money has sloshed into the coffers of just three giant kit vendors. China's Huawei, Sweden's Ericsson and Finland's Nokia together claimed 72% of all spending in 2019, reckons Analysys Mason, an analyst and consulting business.

To many of their biggest customers, it is far from ideal. Prices are too high, and needs go unmet, they complain. Worse, the different vendors are largely incompatible. Operators have had to buy all their RAN products from the same vendor, tying them feudally to that firm.

To sympathizers, it is a market prime for disruption. Fresh impetus has come from geopolitics and the recent European backlash against Huawei.

Operators have put their combined muscle behind open RAN, a set of new interfaces designed to end "lock-in" and spur competition. Dozens of smaller companies  from software specialists to chip designers  are pitching for business. But one stands out.

Better known for its origins in ecommerce, as a sort of Asian alternative (albeit much smaller) to Amazon, Rakuten has for the last few years been constructing a fourth mobile network in Japan based on open RAN principles and other cloud and software technologies. It has racked up net losses of $2.4 billion since 2019 on that project, worrying financial analysts.

But it has also overcome some of the technical doubts about the new-fangled technologies. Last year, it launched a venture called Symphony that aims to sell them internationally. 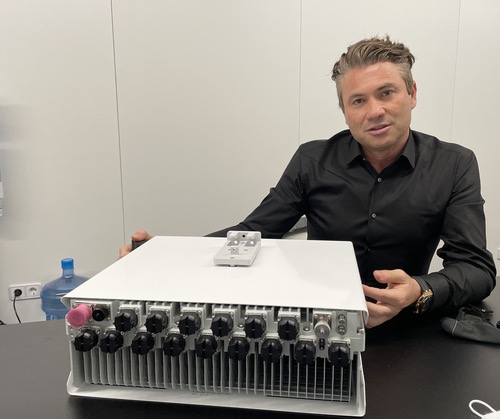 So far, Symphony has announced only one big "turnkey" customer in Germany's 1&1, which, like Rakuten, seeks to build a fully "cloud-native" network.

Boasting a dozen smaller deals and about 130 prospective clients, it has about $3 billion in orders. But it is now targeting about a quarter of the RAN market in which Huawei, Ericsson and Nokia play.

"I don't like to take easier roles and I would like to get to 25% market share," said Tareq Amin, Symphony's CEO, during an interview with Light Reading at the recent Mobile World Congress in Barcelona.

"We are in the early days in our organization, but in the open RAN, as this technology evolves, I think it is a different world we need to compete in, and I think we are one of the leading suppliers in this area."

A 25% market share would translate into substantial revenues for Symphony and have potentially devastating consequences for incumbents. But its achievability depends partly on the extent to which operators embrace open RAN and other Rakuten-inspired technologies.

While the technology concerns are disappearing, not everyone is convinced a multivendor approach will be advantageous. Deals between operators and traditional vendors for the rollout of 5G could limit the opportunity for new entrants until the late 2020s, as could the need to support legacy technologies.

Where analysts agree is that open RAN will steadily increase its market share throughout the 2020s. Even a relatively conservative forecast from Dell'Oro gives open RAN 15% of the market by the middle of the decade. By 2030, when operators may be investing in 6G, many experts reckon open RAN will be de facto.

Rakuten may have several advantages over other new entrants. The first is Amin himself. Probably the closest telecom has to a visionary, he inarguably cuts an impressive figure as a cheerleader for change. Before joining Rakuten, he led the rollout of Jio, a new-look network in India that is now the country's biggest operator. Even the open RAN skeptics acknowledge his impact.

Unlike most other open RAN vendors, Symphony can also refer to a near-nationwide commercial network that uses its technologies in Rakuten Mobile. This largely explains why Amin functions as CEO of both Rakuten entities.

"Without using it as a living lab to validate ideas, thoughts, disruption, I would lose all the momentum I need," said Amin.

"No matter how amazing a deal price I give you, if you are running a traditional network and you give me the opportunity to enter that domain it takes 24 to 36 months," he explained.

"For me as Rakuten Symphony CEO, I need the ability to show the meaningful impact of our own technology. If there were no Rakuten Mobile, we would lose credibility."

Rakuten Mobile, then, has become a showcase for the technologies Symphony is pitching to others, from hardware developed with partner firms to in-house software.

The list includes several companies it has recently acquired: Altiostar, a small but high-profile developer of RAN software; Innoeye, a provider of operational support systems; and, most recently, Robin.io, a Kubernetes-wielding cloud platform.

"It is the last missing piece," said Amin, indicating his Symphony product portfolio is now more or less complete.

"Putting a radio workload on top of any cloud is not trivial and we went through the journey with Robin.io."

Rakuten already held an 8.5% share in the company and Amin feared losing the intellectual property to someone else.

"It could become one of the leading edge-cloud providers. We thought this made complete financial sense."

The real trick for Rakuten is having a full "stack," as the industry calls a comprehensive product portfolio, while demonstrating its commitment to openness.

An Altiostar rival such as Parallel Wireless, focused solely on baseband software, could never in isolation have landed the 1&1 deal. But what if 1&1 or another customer decides it would rather use Parallel Wireless but retain Symphony for other components?

Rivals have been dubious that Rakuten would ever include their products in its app store for network software, now branded Symworld.

"If you are not adding Parallel Wireless or Mavenir then the choice is very limited," said Eugina Jordan, the vice president of marketing for Parallel Wireless. "If you don't like cornflakes, then you are out of luck."

It is a concern Amin is eager to dispel.

He has already been able to attract Nokia as a Symworld partner, although for core software, a field Amin thinks is best left to others. Part of the idea with that deal is to remove the complexities of systems integration as the industry moves from its virtual network functions of yesteryear to the cloud network functions of the future.

While the commercial terms agreed with Nokia are obviously confidential, Amin says the discussion lasted only 48 hours before a deal was signed.

"It is good for Nokia and good for anyone that wants to see digitization and onboarding," he said. "Nokia is motivated to see their app deployed faster."

Amin also expresses zero interest in a go-it-alone approach to Internet Protocol and transport technologies. At MWC, Symphony announced a packet core tie-up with Cisco, besides unveiling Nokia as the first Symworld partner.

But for traditional vendors that flourished in a more hardware-centric world, Rakuten's messages carry notes of threat. Even at MWC, Amin complained about the "margin inflation" he sees with hardware, arguing the "overhead" can be as high as 60%. One of his big goals is to improve pricing transparency.

"If I am leading strategy for these companies, I would recognize that moving into a new software architecture for how to deliver services and even radio is inevitable," he said when asked if his partnership pitch was off-putting to the likes of Ericsson and Nokia.

"I don't think it is a secret that open RAN makes traditional vendors extremely uncomfortable."

The idea that cost savings are available not necessarily through technology but simply because equipment has been overpriced will sound compelling to operators.

"I tell my customers the price value of the box, but I don't share the component costs  that is something I am working on with suppliers today," said Amin.

"Something you will never find in a traditional contract is this concept of full price transparency."

Symphony is targeting a much bigger market than the $40 billion RAN sector. Its own bullish estimates point to a telecom opportunity valued at between $80 billion and $100 billion last year, spread across the cloud, software, field services and equipment.

It is now eyeing a role with enterprise customers, rather than just telcos, and it reckons the entire market will be worth between $130 billion and $150 billion annually by 2025.

Whatever one thinks of those assumptions and forecasts, there is a buzz around Symphony that was audible above the more usual industry chatter in Barcelona.

While New Street Research doubts Rakuten's domestic mobile project will pay off financially, it is persuaded by the cost arguments Rakuten attaches to open RAN, cloud and software. Its "bear case" is that Symphony captures 25% of the future open RAN market. In a bull case, that rises to 50%. 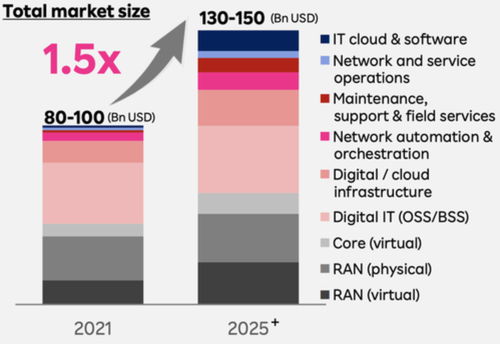 Conceivably, this would make open RAN look even less diversified than today's market, especially if a couple of other big players lay claim to the non-Symphony business.

It would be not so much an injection of rivalry and choice as a changing of the guard, a siphoning of value from hardware devotees like Huawei to the software-mad Rakuten.

But this, too, generates skepticism. How can a company whose parent makes $14.2 billion in annual revenues dislodge a Chinese powerhouse with a research-and-development budget of about $20 billion?

For Amin, the question itself reflects misunderstanding.

"If I open this box in front of you, you will discover it contains super-elegant commodity hardware," he said, showing off a unit built for the Rakuten Mobile network.

"Many operators don't understand the beauty of commoditization and the benefits hyperscalers have enjoyed. And so we don't need to be Huawei. Huawei innovates on hardware. I want to innovate on software."

This does not negate the importance of hardware to Rakuten. Software developed by Altiostar cannot simply make do without high-end chips developed by the likes of Intel and Qualcomm.

The challenge is addressing the economies of scale that Huawei or Ericsson, with their in-house RAN silicon units, have been able to realize as global kit giants. But products from Intel, Qualcomm and a host of other chip designers are increasingly available as merchant silicon.

Rakuten's freedom to focus on software is why comparisons with Huawei are nonsensical, says Amin.

Today, his Symphony unit employs about 2,000 people, versus the 200,000 that Huawei had in 2020. The flagship deal with 1&1 is being as closely watched as Rakuten's mobile project in Japan. Prove naysayers wrong in Germany and Symphony will surely be making an even bigger noise.