Europe is having a terrible, horrible, no good, very bad start to 2021. So bad, in fact, that Nigel Farage might consider a break from his job as EU-basher-in-chief while Europe's bureaucrats continue to self-harm. They quickly backed down after some Belgic stroppiness with pharma giant AstraZeneca culminated in threats to requisition COVID-19 vaccines intended for the UK. But the reputational damage was done.

Also damaging, although headline stuff only in telecom land, was a Financial Times report about Europe's 5G backwardness compared with other regions. Slow rollouts mean only one in four Europeans can access the high-speed mobile technology, according to research carried out by Analysys Mason. Three-quarters of Americans now have 5G availability and coverage is even higher in some parts of Asia.

"We have limited 5G rollouts in Europe and are a bit concerned it is falling behind the frontrunners," said Börje Ekholm, Ericsson's CEO, in the same week that the Financial Times report came out. The Swedish equipment maker benefited from the recent unpopularity of Huawei, damned by its Chinese identity, as well as the 5G stumbles of Nokia, an ailing Finnish rival. But the overall market did not grow, said Ekholm.

The last thing Ericsson wants to see, then, is Europe bungling 5G à la its COVID-19 vaccination program. Addicted to the multi-billion-dollar spectrum auction, some authorities have shown they would rather hold up 5G licensing than forego a potential windfall amid the current pandemic. Others, including the UK regulator, are pressing on heedless of a telco appeal for a less pricey sale. The ditherers of Belgium, Poland and Portugal have awarded no 5G spectrum at all, according to the Analysys Mason research. 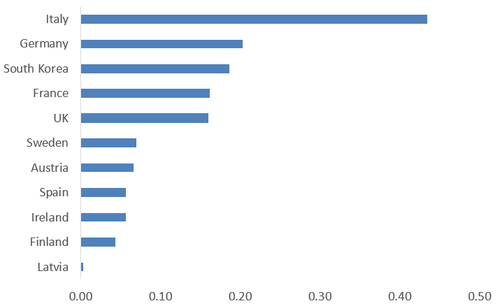 For Ericsson, the latest risk is that policymakers listen to a telco plea about open RAN. This technology has caught the attention of executives at Deutsche Telekom, Orange, Telefónica and Vodafone, who believe it could produce alternatives to Ericsson, Huawei and Nokia, their all-too-powerful equipment suppliers. In a memorandum of understanding (MoU) signed last month, the operators called for "public funding" of the open RAN ecosystem.

Unsurprisingly, Ericsson does not seem to be a fan of the MoU. "We think Europe should be more concerned about offering a high-performance 5G network," said Fredrik Jejdling, the vendor's head of networks, when asked what he thought. "China has 700,000 5G basestations and the US is also investing quite significantly. Europe is relatively behind."

He sounds especially wary of the suggestion that European taxpayers should fund open RAN. "We need to provide public funds to enable the recovery from COVID-19 and build on the backbone of 5G and we think it is important that is done from a technology-neutral perspective so that all technologies can compete on equal grounds," he told Light Reading. "Any type of funding needs to be technology-neutral."

To open RAN supporters, Jejdling's remarks will serve as evidence of Ericsson's nervousness about the emerging technology. While it claims to be developing its own open RAN products, these would invite competition by allowing Ericsson's baseband equipment to be used in conjunction with another firm's radios (in theory). Older specifications require operators to use the same supplier for both.

Open RAN specialists might insist their products qualify as "technology-neutral." New and more interoperable specifications would merely take an unfair advantage away from the big vendors, allowing smaller firms to compete. The writers of marketing blurbs could certainly present open RAN as a more "neutral" technology than "closed RAN" systems that force operators into long-term relationships with single suppliers.

But neutrality implies there is a choice between alternative systems. The vast majority of today's radio access networks have not been designed to use new open RAN specifications. Right now, these traditional networks also look far more advanced than open RAN, which explains why most operators are not ready to embark on widespread open RAN deployments. Even if open RAN closes the gap, many companies may still prefer to use customized, integrated systems provided by one or two vendors.

Howard Watson, the chief technology officer of the UK's BT, is one top executive who has recently downplayed expectations that a world of multivendor networks lies ahead. "It's unlikely that all of us will start deploying equipment from four or five different vendors because the operational challenge of the person in the van maintaining that tends to limit you to a choice of two," he told a parliamentary inquiry this year.

A neat parallel can be drawn with the computer industry. The Apple Mac is rather like the traditional RAN, a finished product whose componentry and software are mainly developed and assembled by the Cupertino-based company. The open RAN equivalent would be the PC built by a do-it-yourself enthusiast using parts from different suppliers. Political support for open RAN is like promoting this DIY approach over the purchase of Apple equipment.

It will provoke little concern about favoritism because of the current David-and-Goliath nature of the clash between open RAN and the big three. Omdia, a sister company to Light Reading, estimates that just $252 million was spent on open RAN last year, compared with about $35.5 billion on traditional products. A leg-up for the small guy sounds fair. 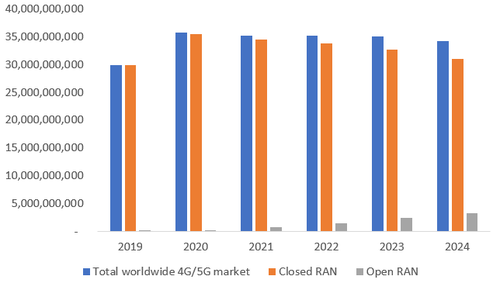 But it should come from the market, not the public sector. If open RAN is so compelling, operators will invest in it. Any public-sector funding for an industry that has remained relatively strong throughout the pandemic would be as questionable as vaccinating healthy youngsters ahead of frail octogenarians. Far more preferable would be a push to ensure that spectrum auctions go ahead. "We are talking to relevant parties, whether government, regulatory authorities or customers, to make sure that 5G auctions happen," said Jejdling.

If the EU is determined to channel some of its recovery funds into telecom, the best use would be to provide Internet connections in areas that are difficult to serve economically. Feasibly, that could mean support for companies developing or rolling out mobile broadband technologies. Flinging money at a particular in-vogue technology would be very hard to justify.