BIG 5G EVENT, DENVER  AT&T is preparing to hire thousands of new workers this year as it embarks on an expansion of its 5G and fiber networks.

Concurrently, the company said it is also laying the groundwork to introduce open RAN equipment into its wireless network, but will do so at a very modest pace.

"It is an incredibly frothy time to be in our industry," Mo Katibeh, AT&T's senior VP of network infrastructure and build, said Wednesday in an in-person keynote presentation here at the Big 5G Event. As Light Reading previously reported, Katibeh is the AT&T executive in charge of handling the operator's C-band spectrum buildout for 5G as well as the operator's ongoing fiber network expansion. 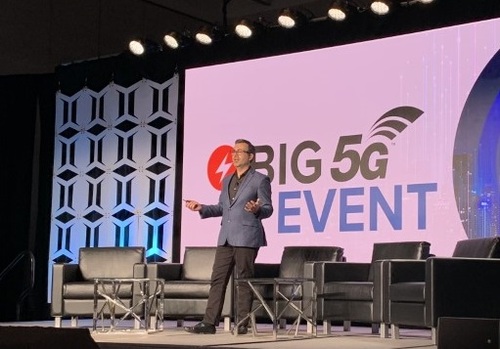 Katibeh called for the industry to create an educational system that would focus on the skills and training necessary for network installation in order to ensure AT&T and other companies have the workforce they'll need to upgrade their networks.

Hiring for the network

"What that means is jobs... we are literally hiring thousands of people this year," he said. "This is a jobs creation story... Fiber and 5G are at the heart of it."

Katibeh explained that AT&T's new hiring plan is related to the dramatic increases in traffic on its wireless and wireline networks. 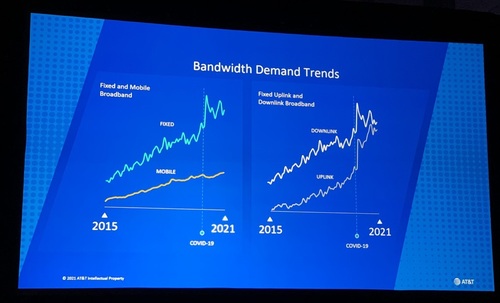 Katibeh showed slides illustrating the traffic increases on AT&T's network. Click here for a larger version of this image.

To address that demand, AT&T plans to build fiber connections to 30 million locations by 2025 and midband 5G C-band connections to 200 million people by the end of 2023.

Further, open RAN technology may be a part of that effort, according to another AT&T executive who spoke here at the Big 5G Event. However, AT&T's Brian Daly offered a relatively restrained view of open RAN in general.

"More work needs to be done to ensure O-RAN can meet our complex feature set," Daly said during a virtual presentation on the topic. He said AT&T expects the open RAN industry to resolve AT&T's deployment concerns "over time," but that "it won't be an overnight transformation."

AT&T's approach to open RAN appears similar to Verizon, which has said it plans to introduce open RAN-capable equipment this year.