The hammer has finally dropped in Germany's 5G auction, sending a few shockwaves through an industry now facing a 6.5 billion ($7.3 billion) bill for the right to use the next-generation technology.

Lasting nearly three months and a record-breaking 497 rounds, the spectrum sale had been expected to raise no more than 5 billion ($5.7 billion) when it first began. But fierce bidding for a limited set of airwaves drove up the prices, inviting criticism of Germany's regulator by telcos and their suppliers.

Operators were especially angered by a controversial decision not to include 100MHz of "mid-band" spectrum in the auction, blaming this move for inflating the cost of the frequencies made available. The 100MHz left out of the process has been earmarked for local and industrial use after companies including carmaker Volkswagen expressed interest in building their own 5G networks.

But competition from a new mobile entrant was also responsible for the outcome. Having used Telefónica's network to provide mobile services, broadband operator 1&1 Drillisch now plans to build its own mobile network after spending nearly 1.1 billion ($1.2 billion) on spectrum.

Market leader Deutsche Telekom was the biggest spender, splashing almost 2.2 billion ($2.5 billion) on 40MHz of paired spectrum in the 2GHz band and a 90MHz block in the 3.6GHz range -- the "mid-band" that Europe's operators see as their best option for supporting nationwide 5G services.

Number two player Vodafone picked up the same amount of spectrum in those bands for the smaller fee of about 1.9 billion ($2.2 billion), while Telefónica spent more than 1.4 billion ($1.6 billion) on 20MHz of 2GHz spectrum and 70MHz in the 3.6GHz band. The full results are summarized in the tables below.

In its statement on the results, Deutsche Telekom said the auction had left a "bitter taste" and that fees would chew into its budget for network expansion. "The network rollout in Germany has suffered a significant setback," said Dirk Wössner, the managing director of Deutsche Telekom's German business. "The price could have been much lower. Once again, the spectrum in Germany is much more expensive than in other countries. Network operators lack the money to expand their networks. With the auction proceeds one could have built approximately 50,000 new mobile sites and close many white spots."

The assessment is something of an exaggeration. The final bill is nowhere near the 50 billion ($56.6 billion, at today's exchange rate) that German operators spent on 3G spectrum in 2000. In terms of the price per MHz per head of population (a common way of valuing spectrum), German operators also spent less than half as much as Italian operators did on mid-band airwaves during a 5G auction last year.

Nevertheless, it moves Germany ahead of other European countries on this measure and comes just days after China handed out 5G licenses without demanding hefty fees in return. Ericsson, which sells radio gear to Deutsche Telekom in Germany, has been fiercely critical of the entire auction set-up in Europe, arguing countries should drop them in favor of Scandinavian-style "beauty contests" that generate much smaller proceeds. 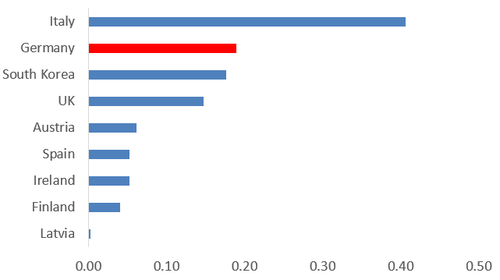 "Operators are required to make a certain commitment in terms of coverage and infrastructure and then countries can flourish," said Arun Bansal, the head of Ericsson's business in Europe and Latin America, during a recent conversation with Light Reading. "It is short-term thinking by governments and regulators to get high fees up front."

The concern is amplified in Germany because the pricey licenses do come with obligations on coverage that operators may now struggle to meet. Deutsche Telekom says the framework conditions were not "completely clarified before the auction" and that it is in discussions with the regulator on this issue. It has also offered to build rural networks through partnerships with its rivals. "We will start talks on this," said Wössner.

At least one competitor has indicated it would be receptive. "Telefónica is also focusing on the expansion of commercial cooperation models in order to accelerate expansion," said Markus Haas, the CEO of the German business, in the company's own statement about results. "We are prepared to work closely with competitors willing to invest in network expansion."

Telefónica was similarly critical of the process. "We remain convinced that frequency allocation via auction was counterproductive for the expansion of mobile communications in Germany," said Valentina Daiber, Telefónica's chief officer for legal and corporate affairs. "The course of the auction showed that the design as well as the insufficient amount of available frequencies drove up the costs. From the consumer's point of view and for Germany as a business location, these investment funds would be much better spent on network expansion." Telefónica is now seeking an extension of other spectrum licenses.

Vodafone was more cautious in its criticism of the German process. "We believe it is important to have a balance between the price paid for spectrum and our strong desire to create an inclusive society through investment in mobile network coverage," said Nick Read, Vodafone's CEO.

1&1 Drillisch had little to say about the spectrum sale other than noting its gains. The company's share price was trading up 2.6% in Frankfurt this morning, at the time of writing, but has fallen 32% since the start of the year.

James_B_Crawshaw 6/14/2019 | 4:09:06 AM
Spectrum Bellyaching I've often bought things on Ebay and in the heat of the moment paid far more than I should for some second hand tat and ended up regretting it. The auction winner's remorse / curse. But these are sunk costs and should (in theory) have no impact on my future investment decisions. The GSMA and other lobby groups pay consultants to do studies that try to show in practice operators do take sunk costs into account when deciding how much to invest or what prices to set for their services. Here is an example:

I would point you to the charts on page 17. Let's assume that their wireless score metric is valid even though it puts Australia about 17 times Austria. Is there a correlation between this wireless score and cost of spectrum? Not that I can see. They have drawn a curve with a pathetically low R-squared of 0.164. That is meaningless. I could draw one that went from bottom left to top right that implied wireless score improves as the cost of spectrum goes up.

Clearly there are lots of factors that affect the quality and cost of mobile service that the public gets. I am not convinced that spectrum costs are a major factor.