Should telcos become banks? That's one of the questions we asked the telecom industry in an industry survey conducted in late November ahead of Light Reading's annual 2020 Vision Executive Summit, where the results of the survey were first unveiled.

A resounding majority -- 88% -- of the 189 respondents to the survey believe telcos should not go down this particular diversification route, even though service providers are desperately seeking new revenue streams as voice revenues dry up, data revenues stagnate and capital/operating cost pressures increase. 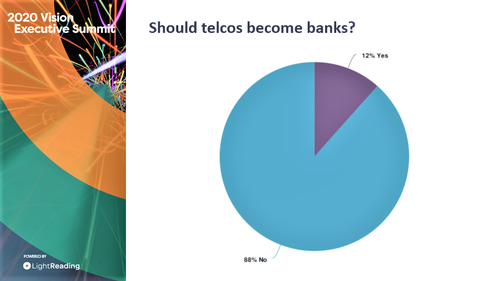 Not many in the industry believe telcos should become banks.

The question is very particular: This is not about whether telcos should offer mobile finance services -- this is about whether they should become fully fledged, accredited banks.

It's likely that among the 12% that voted in favor of telcos becoming banks were employees of Orange, the French service provider giant that has taken the leap into the banking world. In 2016 it acquired a majority stake in Groupama Banque before launching Orange Bank services in France in late 2017.

In late 2018, Orange unveiled plans to offer banking services in seven European countries by 2023, setting itself a target of attracting 4 million banking customers within six years.

Then only weeks ago, as part of its Engage2025 plan, Orange announced the following:

In financial services, Orange Bank, having attracted 500,000 customers in its two years of operation, will be launched in all European countries where the Group operates, by 2025. Banking services such as micro-credit will also be launched in Africa & the Middle East from 2020 to extend the range of services already offered through Orange Money. Capitalising on the success of offers combining banking and telecoms (device financing, cash back on shop purchases, etc.), Orange Bank will develop new products relating to payment, credit and insurance, and is working on a specific digital banking offer for professionals and small businesses. Orange Bank will break even in Europe towards the end of 2023, with nearly 5 million customers and around 400 million in net banking income. Orange Bank Africa will reach nearly 10 million customers by 2023 with net banking income of about 100 million.

Orange, for one, believes that becoming a bank makes strategic sense as the lines blur between the communications sector and other verticals and as pressure grows to derive revenues from non-traditional services.

Further results and insights from our year-end survey will be published on Light Reading in the coming days.

jerehada 1/7/2020 | 4:26:17 PM
There is something in this Banks look at cost income ratio to measure efficiency and you would think like all the Challenger Banks telcos would be able to compete with lower operaiting cost models. Telcos also seem to manage debt, issue corporate bonds and achieve favourable rates due to the predictability of their revenue flows. All the same reasons PE is buying telco assets. They run phone leasing (loans), scaled customer service operations which would easily support banking applications and manage lots of customer data albeit difficult to explot under operating licences. Orange was also a leader on Quad Play which is now normal practice so who's to say in 5 years Banking could not be the 5th play. On the debit side CSPs are comparatively poor at developing software for pure digital experiences but no wose than most major Banks. Question is if there is any profit in Banking in the segments they identify. Challenger banks seem to struggle with profitability higher profits bring higher risks in lending portfolios.
Reply | Post Message | MESSAGES LIST | START A BOARD

Phil Harvey 1/23/2020 | 11:44:37 AM
Verizon Has a Credit Card This is more like affinity marketing but it does get Verizon a little more time inside the customer's wallet and closer to influencing and steering their spending habits.

Here's the text of the press release:

"We are thrilled to be working with Verizon as they continue to bring innovation to their customers. This partnership is a great growth opportunity for Synchrony as we continue to diversify our portfolio," said Margaret Keane, CEO, Synchrony.