LONDON -- 5G World Summit -- With a hefty portion of the communications sector's messaging system market already under its belt, Mavenir is seeking to build its business with the world's mobile operators by providing a broad range of software-based core and access technologies that, it hopes, will double the size of its business.

Briefing industry analysts and the press in London last week, Mavenir Systems Inc. executives provided an update on the company's portfolio and strategy and outlined how it hopes to build from the profitable $500 million turnover company it is today to become a $1 billion revenues vendor by 2022.

For many that might seem like wishful thinking, partly because Mavenir, after years of sometimes head-spinning M&A activity and name changes, is something of an unknown quantity. The most common question about the company is "What does Mavenir do exactly?"

Well, under various guises and ownership it's been around for 12 years and, as the market developed around IMS (IP Multimedia Subsystem) core applications -- think session border controllers, telecom application servers (TAS), VoLTE/VoWiFi platforms and more -- so the company found its groove and developed relationships with many of the world's leading operators before hitting a six-year period of M&A turbulence that added messaging platform heft and virtualized mobile network capabilities:

For now, then, its ownership and focus appear settled, with any further M&A likely to be strategic bolt-ons similar to the Argyle purchase: CMO Stefano Cantarelli, a communications industry veteran who joined recently, noted that the company "is not stopping  we will acquire when there is good technology and if it's developed in the right way then it's relatively easy to integrate."

The end result is that, today, Mavenir has 254 operator customers, a growing business -- its revenues grew by 20% in 2017, according to the company -- and it's winning new business with its messaging and IMS products while developing new mobile access applications, from cloud RAN, to virtual gateways, to edge computing management and virtual packet core capabilities.

What's key to Mavenir's offer here is that its entire portfolio is software -- it has no hardware business to protect. That makes it easier for the company to break new adjacent markets, either through internal development -- about 60% of its circa 2,200 workforce is in R&D -- or acquisitions of other software players.

Cantarelli notes that nearly all of its sales still come from its messaging and IMS products currently: "We are just starting in cloud RAN  revenues are small now but we will see growth in the next three years and grow that part of our business tenfold. Virtualization is the most important development of our era -- it is the only thing that can change the fundamental pillars" of network design, operation and management, all of which need new models. "A new deployment model, new economics, is needed for full 5G  operators need to focus on the overall solution, not the hardware and have DevOps, not the telco mindset of develop, deploy and leave alone."

And for the Mavenir man, the operators need to be deciding right now how they will introduce and operate as virtualization, edge computing and other parts of the 5G puzzle are introduced. "Decisions and investments made today will lay the foundations for a new economic model," believes Cantarelli.

Ambitious growth plan
So Mavenir's plan is to essentially focus on two things.

First, to innovate with its messaging and core applications and grow that business further "by showing the operators what is coming next and being a leader, not a follower." An example of that is its new security platform, released during 5G World Summit, while the vendor is pushing hard with its RCS messaging platform that, having proven itself in numerous Tier 1 deployments, particularly in the US market, is now set to underpin enterprise multimedia messaging service launches. Mavenir has also recorded some notable wins with its VoLTE tech, notably Reliance Jio in India, while executives also claim to have replaced major equipment vendor rivals in operator VoLTE deployments recently. (See Mavenir Launches Network Security & Fraud Management Suite, T-Mobile Adds Video Calling to RCS Line Up and Mavenir, T-Mobile Confirm US RCS Launches .)

Second, to pitch its software-based, "cloud-native" mobile access portfolio to its existing 250+ operator customers with which it has already built a supplier relationship. The capabilities of the processors now powering x86 hardware are giving companies like Mavenir a chance to compete with the likes of Ericsson, Huawei and Nokia in the radio access and edge computing network, the vendor's executives believe.

Joining potentially influential industry groups is part of its effort to become a name in virtualized mobile networking -- it is a member of the operator-led xRAN Foundation as well as the Open vRAN initiative led by Cisco that was announced at this year's Mobile World Congress. In addition, it has within its executive team a great deal of experience in software development and deployment and an understanding of what is needed to build an efficient virtualized architecture. For example, in telco cloud environments, scaling up is important but, as the cloud infrastructure becomes more distributed with edge computing deployments, the ability to efficiently scale down will also become important, and that's a key attribute of the vendor's virtual EPC (originally developed by the Brocade team). 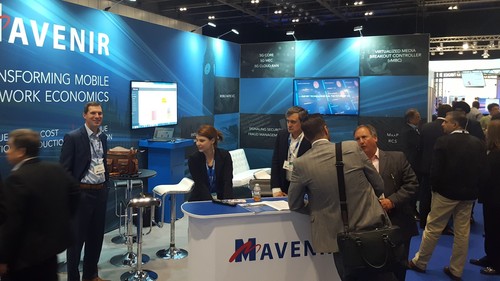 Mavenir was busy on the 5G World Summit show floor.

But given the strength of the competition, does Mavenir have any chance of making an impact with its virtualized mobile network proposition, especially in a market that is so dominated by influential and powerful incumbent vendors?

"It has very big ambitions [in the mobile network market] and in many ways that's good to see. It's challenging the major vendors with a software-only proposition and trying to make inroads into the radio access network sector is a very big deal for any challenger," notes Heavy Reading principal analyst Gabriel Brown.

But Mavenir won't be doing this on a whim, believes Brown. "Operators are saying they want more competition and innovation in the radio access network  and it is the operators and web-scale companies that have been pushing initiatives such as Open RAN that proposes open interfaces and a swifter path to the introduction of innovative technologies  Mavenir has likely had some encouragement to pursue this strategy," he notes. (See Major Telcos Pool Efforts to Slash 5G RAN Costs.)

Brown says Mavenir will focus on developing a software-based baseband capability that will run on white box hardware and then team up with radio-head developers to deliver the complete radio access system, with the likes of Commscope, Fujitsu and AceAxis the kind of companies it could partner with.

And even though nearly the entire radio access market is split between the big three (Ericsson, Huawei, Nokia) plus Samsung and ZTE, there is room for new players to break in and get a chance, probably in rural or developing markets at first. And with the RAN market being so large -- tens of billions of dollars of capex per year -- even a small market share would be significant to the finances of a company such as Mavenir, notes Brown.

Whether Mavenir can meaningfully add to its messaging and IMS business with any significant action in the mobile access market, though, is still unknown: As Brown has noted previously, while network operators are often bullish about wanting new options and greater software-based/open interface innovation, major purchase orders don't always materialize. Mavenir, of course, will be hoping those progressive operators are not just all mouth and no trousers (as us Brits would say).

jimmy666 6/21/2018 | 1:34:57 PM
Mavenir and the dazzling Blueprint The post is incredible in its newness and the beautiful style in which it is composed. An amazing story indeed! I am absolutely glad to reach your website once again from my own laptop. My system was down for at least a month and a half because of the severe attacks of Ransomware. Avast Customer Support was benevolent indeed in my case as they fixed up teh issue promptly.
Reply | Post Message | MESSAGES LIST | START A BOARD