Your 5G Icon Is Virtually Meaningless

Don't pay any attention to those 5G signal icons. They're not going to tell you anything anyway.

Im not just talking about AT&T's widely condemned decision to replace the "LTE" icon on its phones with the "5G E" icon. I'm talking about pretty much all current and future 5G phones. That's because the technology behind 5G is much more complex than the technology behind 4G, and because operators are tackling the space in a variety of different and mostly confusing ways.

And pretty much none of that complexity or diversity is going to be communicated to users through the signal icon on a 5G phone.

As a result, here's what may be the wireless industry's default approach to how and when to display a 5G signal icon:

According to the above recommendation from the GSMA, the global wireless industry's trade group, the only time a 5G-capable phone would show the 4G icon indicator is when the phone is connected to a tower that doesn't support the 5G "NSA" standard. NSA stands for "non-stand-alone" 5G and is the version of the 5G standard that most wireless network operators around the world are implementing. The NSA version of 5G essentially requires a supporting 4G LTE network to handle things like authentication and cell site handoff.

Based on the above recommendation, operators should display the 5G icon on phones that are in range of a tower with 5G network capabilities -- it doesn't matter if that phone isn't actually making use of the faster 5G NR transmission standard.

Now, to be clear, there are plenty of reasons that the GSMA is recommending the above approach. Primary among them: 5G phones don't actively sniff out 5G NR signals because it could drain the phone's battery too fast.

Also, these recommendations are just that: recommendations. Telcos, working with their phone suppliers, are the ones that are going to make the final decision on all this. But, based on my research into this topic, it's pretty clear that you're going to see a lot of 5G icons in the future, and that you won't be able to trust any of them. 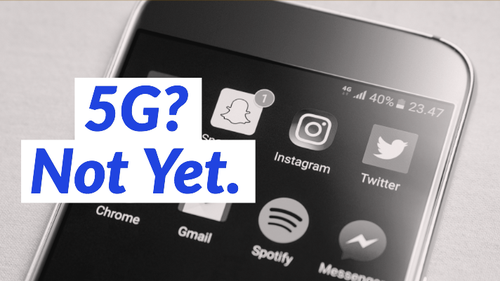 A history of the 5G icon conundrum
As the wireless industry was working on initial 5G specifications several years ago in the 3GPP standards body, they ran into the status icon question. However, the 3GPP is primarily focused on technology, not marketing or customer experience, so it was primarily concerned about what information the network needs to communicate to the device, not what the device should display to the user.

Mike Thelander, an analyst at Signals Research Group who closely tracks wireless industry standards activities, explained that the initial 3GPP discussion on the topic was whether the network should tell the phone lots of different kinds of 5G details, like potentially the spectrum being used or the latency speeds available. He said that after some debate the standards group decided to keep things simple and only transmit one "bit" of information from the network to the device. He suggested that this compromise essentially pleased everyone except the operators that believed they would have a leg up on the competition due to their network design or their spectrum position.

Thus, with just one bit, an operator like Verizon won't be able to communicate that it's blasting 5G at 700Mbit/s with 20ms of latency at 99% reliability. With one bit, all it can say is whether 5G is available or not.

So, after agreeing to only include one bit of information in the status icon, the next obvious question was what that icon should display and when it should display it. For that, the 3GPP turned to the GSMA, the trade association for the global wireless industry. That makes sense considering the GSMA is involved in several joint mobile network operator initiatives ranging from eSIM technology to mobile banking. "Operators agree that it would be beneficial to have consistency" in terms of what signal icon is displayed to the user, according to one of the GSMA's filings on the topic to the 3GPP.

In response to the 3GPP's request, the GSMA convened a 5G Status Indicator (5GSI) Task Force, a group of top operators around the world tasked with figuring out exactly how the 5G status icon should work.

The group's initial recommendation to the 3GPP in 2017 was this:

However, this recommendation ultimately was not accepted by the 3GPP. Instead, according to GSMA officials, the 3GPP decided to leave it up to individual operators to decide how and when to display the 5G icon.

However, that approach doesn't cover unlocked, "gray market" devices, devices not sold by operators themselves. These "open market" devices are the ones you can buy used or over the Internet, ones that you would just stick a SIM card into to use.

After roughly a year of work and 15 conference calls, the GSMA's 5GSI Task Force group earlier this year came up with recommendations for those devices, which are listed at the top of this article in Table 1. They represent the default settings for 5G signal indicators.

The 3GPP hasn't yet accepted these recommendations.

5G implementations in the US get even more complicated
Are you confused yet? If so, take a breath, because the 5G status icon story is only going to get more complex from here on out.

While the GSMA's 5GSI Task Force was working on its recommendations, AT&T and Verizon were each putting the finishing touches on their initial commercial 5G launches. As has been widely reported, AT&T decided to basically apply a variety of different 5G-flavored icons to its phones:

Now, none of this is to be confused with the "5G UWB" icon that Verizon is putting onto its 5G phones. UWB stands for "ultra wireless broadband," which is the marketing mouthful that Verizon is trying to mash onto its own mobile 5G buildout using the NR transmission standard in its millimeter-wave spectrum.

What's interesting here is that the "5G UWB" icon is particularly hard to find, and not just because of Verizon's spotty 5G coverage -- according to early reviews of Verizon's mobile 5G network in Chicago, the icon flickers on and off seemingly at random. "Even carefully positioned a few feet away from the 5G node, the large on-screen icon exclaiming Verizon's 5G network toggled back and forth from 4G to 5G. It felt like all I had to do was move the phone or look at it funny and the 5G UWB (Ultra Wideband) insignia would flicker away," wrote Cnet.

Verizon's Mike Haberman explained that the "5G flicker" is because Verizon is deploying the NSA version of 5G. "When you set it up that way, the device tamps on 4G when it's idle, the 4G control channel. And when you send data, that's using 5G. So, the icon on the device only displays 5G when you're sending traffic," he said. The reason the icon flickers is because the phone is periodically sending data in the background over 5G, thus triggering the icon to switch to 5G UWB.

Haberman said that when Verizon deploys the "stand-alone" (SA) version of 5G in a year or two, that will all change because the phone will use the 5G control channel and will always display the 5G UWB icon.

However, both Cnet and Thelander at Signals Research Group took issue with that reasoning. Thelander said he conducted detailed tests of Verizon's 5G network in Chicago and Minneapolis and found that the 5G UWB icon sometimes was displayed even when his testing equipment clearly showed that the phone was transmitting data over Verizon's 4G LTE spectrum bands.

Regardless, Verizon appears to have taken such criticism to heart by indefinitely postponing the $10-per-month 5G service charge it had been planning to apply.

3 reasons not to trust your 5G icon
Now, to be fair, it's still early days in 5G, and I suspect the "5G flicker" and other such glitches will be ironed out over time. But that doesn't mean the 5G icon situation is going to get any better. Specifically, the relative simplicity of today's mostly ubiquitous "4G LTE" status icon is not going to carry over into the 5G future. Here's why:

In five to ten years, when most 5G buildouts are finished, 5G icons will probably act like 4G LTE icons do today. Until then, feel free to ignore that mostly meaningless 5G icon.