U.S. Cellular CTO Michael Irizarry said that the operator's 5G plans are a little bit different than those of his rivals. Specifically, he told Light Reading that U.S. Cellular is reserving its 600MHz spectrum solely for 5G, and that the operator plans to initially install millimeter-wave transmitters on its macro towers.

That said, much of the rest of U.S. Cellular's 5G buildout will dovetail with what the rest of the industry is doing in 5G.

"So think of it as a layer cake," Irizarry said of U.S. Cellular's 5G plans. "Low-band LTE, and then on top of that midband. And then these small cell coverage zones to deliver this fulsome 5G network."

That idea of a layer cake of spectrum for 5G -- stretching from low- to high-band spectrum -- is one that others in the industry have also used. Indeed, it has played a starring role in T-Mobile's 5G story since the operator first disclosed its own 5G plans more than two years ago. 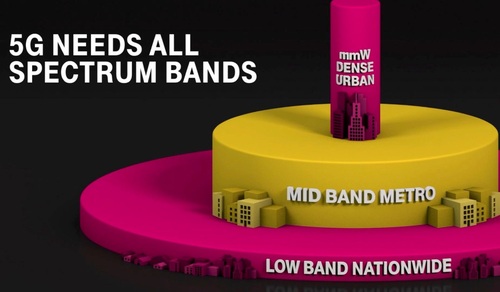 T-Mobile has long described its 5G efforts in terms of a spectrum "layer cake."
(Source: T-Mobile)

Although the broad strokes are the same, U.S. Cellular's 5G details will be a little bit different. The operator plans to install millimeter-wave spectrum transmitters first on its macro towers and then later on small cells as it works to densify its network. Irizarry said those initial millimeter-wave transmitters will be located between 120-130 feet above ground level -- which is higher than the 40 to 50 foot tall street lights that some other operators like Verizon are using for millimeter-wave transmissions via small cells. Irizarry said that height will give U.S. Cellular an advantage because its transmitters will be able to cover more territory. "You improve the likelihood that the mobile device will experience what's called a line of sight propagation path as opposed to a non line of sight," he said. "If you look at a lighthouse, they're mounted high up for a reason."

Irizarry acknowledged that U.S. Cellular's macro towers aren't close enough together to support broad millimeter-wave coverage, so the operator will have to deploy small cells in between its macro towers to flesh out its footprint. "Millimeter wave was never designed to provide ubiquitous coverage like a low band spectrum," he said. "It will be deployed a where you have high concentration of usage, high demand."

Irizarry said U.S. Cellular is holding all of its 600MHz spectrum licenses in reserve for 5G. "I have clean, unused 600MHz spectrum that will be dedicated to 5G NR, whereas the other carriers have to share their low band -- whether it's 600, 700, 800[MHz] -- between LTE and 5G NR," Irizarry said. "And why that's important is, I don't have to allocate the resources in that 600MHz to support LTE traffic. It can all be dedicated to 5G NR. Which will deliver a higher, more consistent experience to users on NR versus someone who has to share their low-band channel assets between LTE and 5G NR."

T-Mobile, meantime, has been deploying LTE on its 600MHz.

That means U.S. Cellular will not employ dynamic spectrum sharing technology when it launches 5G. Such technology allows operators to share spectrum dynamically between LTE and 5G -- both AT&T and Verizon have promised to use the technology in the next year or so. However, Irizarry said U.S. Celular might make use of such technology as it expands 5G to its other spectrum bands that it currently uses for LTE, which he said the operator would do eventually.

U.S. Cellular also previously announced it would use 5G equipment from vendors Nokia and Ericsson -- vendors that the rest of the nation's operators are also using.

And Irizarry reiterated that U.S. Cellular would launch 5G sometime next year in some of its larger markets, though he declined to name the markets or provide any more specificity in terms of launch dates. He also did not say what speeds the operator would provide on its service or how the operator would price the offering.

U.S. Cellular counts roughly 5 million US mobile customers. The company runs a wireless network in a handful of US states, including parts of Texas, Washington state, Maine, Kansas, Nebraska, Iowa, Tennessee and elsewhere.