These Carriers Are All Faster Than AT&T's 5G E

AT&T stirred up a huge amount of controversy earlier this year when it decided to label its LTE Advanced services as "5G E" on its customers' phones. And now, based on new numbers from network monitoring company OpenSignal, AT&T's "5G E" phones are just a smidge slower than the phones from Verizon and T-Mobile that support the same technologies. 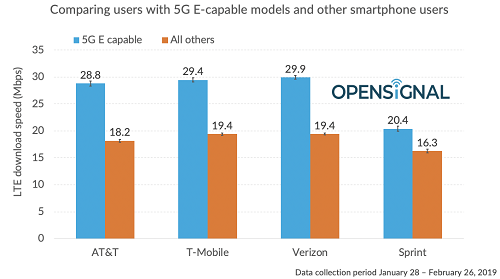 "At Opensignal, we are not distracted by technology claims or marketing decisions," the firm wrote in a post on the topic. "We simply measure the real-world experience of users to see if one service delivers a better or worse experience than another."

The monitoring company found that the phones that fall under AT&T's definition of "5G E" recorded average download speeds of 28.8 Mbit/s. Similar phones from Verizon recorded average download speeds of 29.9 Mbit/s and phones from T-Mobile supporting the same technologies recorded download speeds of 29.4 Mbit/s. An OpenSignal representative subsequently added that "with confidence intervals, T-Mobile was actually tied with AT&T." Confidence intervals are similar to the margins of error in opinion polls, and essentially reflect the variability in a pool of measurements. OpenSignal's "5G E" figures come from measurements on phones carrying OpenSignal's tracking software between January 28, 2019, and February 26, 2019.

For all carriers, OpenSignal did record a significant difference between phones that support advanced LTE technologies and those that do not. "Perhaps carriers should show a different icon for smartphone users when experiencing the latest 4G technologies like LTE Advanced Pro?" the firm noted.

AT&T laid the groundwork for its action back in 2017 when it announced it would apply the "5G Evolution" branding label to markets where it offers LTE Advanced technologies like 4x4 MIMO and 256 QAM. Then, earlier this year, AT&T began replacing the "LTE" icon with a "5G E" icon on phones that support those technologies. The company's decision sparked widespread backlash from its competitors; Verizon issued a public rebuttal while Sprint filed a lawsuit.

(It's also worth noting that Verizon currently covers 234.1 million people with LTE Advanced technologies like 4x4 MIMO, 256 QAM and carrier aggregation while AT&T said it would cover around 200 million people by the first half of 2019.)

Meantime, AT&T is reserving the "5G+" icon for phones that connect to its 5G NR transmissions in its millimeter-wave spectrum. And though the company said it launched a dozen markets with that technology at the end of last year, the company has provided virtually no details about the performance of that offering. Further, AT&T's "5G+" services remain available only to "select" customers.

The bottom line: The nation's top wireless network operators are working from the same playbook. They mostly rely on the same network standards from the 3GPP and the same vendors like Samsung and Apple for phones and Nokia and Ericsson for network equipment. The actual differences lie only in how each operator architects its network -- where it places towers, what kind of backhaul it uses -- and the spectrum it employs for services.