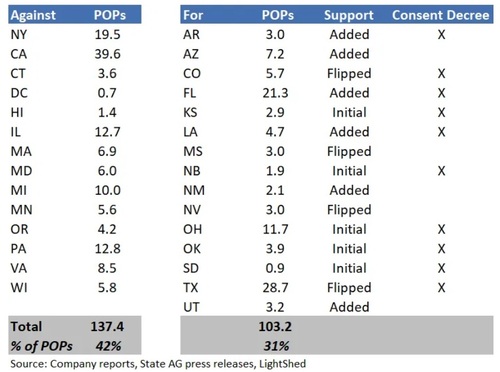 LightShed sheds light on the states that oppose and support the proposed merger of Sprint and T-Mobile, as well as their respective population figures (POPs) and whether they have switched their position on the transaction. The firm also highlights whether states that support the merger have signed the Department of Justice's consent decree approving the merger. "We are not aware of the incremental relevance of why a state would support the deal, but not sign the consent decree," the analysts wrote. Source: LightShed
Like what we have to say? Click here to sign up to our daily newsletter
Related Stories
COMMENTS
Newest First | Oldest First | Threaded View
Add Comment
Be the first to post a comment regarding this story.
EDUCATIONAL RESOURCES