Government awards of spectrum, the airwaves that telcos use to provide services, are typically a compromise between two extremes, remarked Thomas Dannenfeldt, the chief financial officer of Germany's Deutsche Telekom, during a recent earnings call.

At one extreme, a regulator can bestow licenses for a negligible fee, eschewing proceeds to leave operators with the funds for a speedier network rollout. At the other, they can fatten the public purse but risk crippling the service providers. With its brand of state capitalism, China is often seen as an example of the former. In its latest 5G auction, Italy is starting to resemble the latter. (See Eurobites: Italy's 5G Auction Crosses 5B Mark and Italy 5G Auction Bids Top 4.4B in Worrying Sign for Telcos.)

At the end of business on Friday, telcos participating in that auction had bid nearly 6 billion (US$7 billion) for new 5G licenses, and they look set to cross the 6 billion threshold when bidding resumes today. Before the auction began, Italian authorities had set base prices to guarantee about 2.5 billion ($2.9 billion) for government coffers. Analysts in the know thought Italy might generate about 3 billion ($3.4 billion) in overall auction proceeds. No one expected 6 billion ($7 billion), and the final amount could be even higher.

Spectrum auctions are usually more lucrative for governments when low-band, "sub-GHz" airwaves are up for sale. Because signals travel much further in these bands, and penetrate buildings more effectively, operators have been willing to pay a premium. Italy's auction, unlike recent 5G sales in Spain and the UK, included licenses for the 700MHz band. That part of the sale, which has already closed, raised about 2 billion ($2.3 billion) after authorities reserved a chunk of spectrum for an aggressive new entrant called Iliad (Euronext: ILD) that is squeezing its rivals hard. (See UK's £1.4B '5G' auction looks bad for industry and Spanish 5G Auction Nets 438M for Govt.)

But the 700MHz component of the sale does not explain why the auction has beaten expectations. These licenses raised about 0.56 ($0.65) per MHz per head of population (per MHz pop), according to Light Reading's calculations. That figure is not much higher than the 0.51 ($0.59, at today's exchange rate) per MHz pop that a host of European operators paid for 800MHz spectrum during 4G auctions a few years ago, according to data from market research firm Analysys Mason. (See The Great 5G Spectrum Devaluation.)

The big surprise has been the mid-band spectrum between 3.6GHz and 3.8GHz. On the second day of the auction, bids for this spectrum totaled 786 million ($913 million). By last Friday, the twelfth day of the sale, they had risen to nearly 3.8 billion ($4.4 billion). That works out to be roughly 0.31 ($0.36) per MHz pop. No one who examined earlier auctions of this spectrum in other European countries would have seen this coming. An Irish auction of 3.6GHz spectrum last year raised about $0.05 per MHz pop, while Spain's 3.6-3.8GHz sale in July generated a similar amount. Even the UK's competitive auction of 3.4GHz spectrum made just $0.15 per MHz pop. 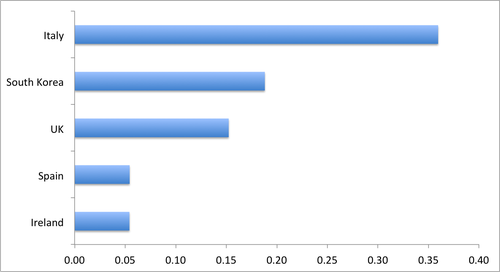 For the Italian operators now driving up spectrum prices, this is all a worry. Few observers expect 5G services to fuel revenue growth for telcos any time soon. In the meantime, Telecom Italia (TIM) and Wind Tre already stand among Europe's most heavily indebted operators. Hit by competition from Iliad, Wind Tre and Vodafone Italy reported sharp declines in service revenues in the April-to-June quarter. Although operators will not have to pay the entire spectrum bill upfront, there may be some risk that exorbitant licensing costs delay investment in 5G networks. Another danger is that operators pass charges on to Italian consumers and businesses in the form of higher prices. If 5G services are as economically important as their advocates argue, Italy's government should also be concerned.

The country's trade unions are not happy. In a joint statement issued last Friday, three of the most powerful are reported to have complained the auction took place "without a rational analysis of the investment and hypothetical and profitable revenues related to ultrabroadband services." Evidently worried about the possible impact on jobs, they also noted that Italy's telecom sector is "characterized by heavily indebted companies, with falling revenues and margins, price competition that penalizes investments and innovation." The "business continuity" of some operators is at risk, they add. (See Telecom Italia Says 5G Auction May Force It to Sell Assets.)

While it is Italy's telcos that are bidding up the value of spectrum, authorities seem culpable. Italian operators are no more desperate than other European operators to acquire new frequency licenses. Nor is 5G a more lucrative opportunity in Italy than elsewhere. Bidding may be out of control partly because the allocations of mid-band spectrum are so uneven, with two 80MHz and two 20MHz licenses apparently up for grabs. Recent merger activity has also turned Italy into Europe's most competitive mobile market. Authorities allowed 3 Italia and Wind Telecomunicazioni SpA to combine as Wind Tre only after the companies agreed to preserve Italy as a four-player market by selling assets to Iliad, which had caused mayhem for established operators in France when it launched a mobile service there in 2012. All four Italian operators are now eager to land 5G licenses. (See ZTE ban and Iliad entry blow Wind Tre of course and Sales Squeeze to Drive Heavier Cutbacks at Vodafone.)

For operators in countries that have yet to sell 5G spectrum, Italy's ongoing auction is a troubling sign of what could happen. If they really care about 5G, governments in those countries tempted by the possibility of a spectrum windfall would do well to heed the industry's warnings.