Once again, Trump's attack dogs are growling at authorities in Europe and Asia as operators in those regions eye 5G deals with Chinese vendors. But their bark sounds increasingly desperate.

First it was the turn of the Italians, who this week received a new Huawei-to-hell warning from AC/DC fan Mike Pompeo. "We want to be a partner with Italy in all of these things, but it is not the case that we will sacrifice America's national security to put our information in a place where there's a risk that adversaries or the Chinese Communist Party might have access to that," said the US Secretary of State when asked by Sky TG24 about the consequences of Italian deals with Huawei, China's biggest telecom equipment vendor. 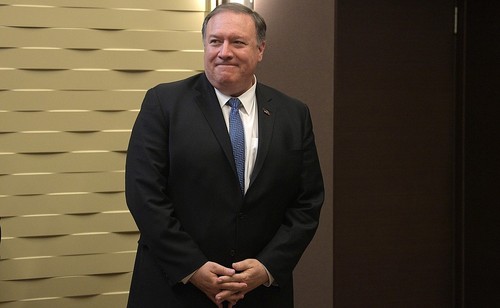 The US Secretary of State is in a difficult position on Huawei.

Days later, Wilbur Ross, the US Secretary of Commerce, was baring his octogenarian teeth at the Indians. "Anybody who thinks we are doing this for protectionism simply doesn't know the facts," he reportedly said (subscription required), as the US slapped protectionist tariffs on European exports worth $7.5 billion. "We hope that our geopolitical partner India does not inadvertently subject itself to untoward security risk."

That met with a vigorous response from Sunil Bharti Mittal, the chairman of Bharti Enterprises, one of India's biggest conglomerates. "The US advisory is well taken from our point of view," he is quoted as saying. "But Indians will have to decide for themselves." Bharti Airtel, the telecom subsidiary of Bharti Enterprises, is one of several operators now weighing the choice of 5G vendors as India prepares to hold a 5G spectrum auction.

But a couple of thousand miles to the east, one of Malaysia's biggest operators has already decided that Chinese 5G makes sense, and it has done so with the full support of its government. On Wednesday, Mahathir bin Mohamed, Malaysia's prime minister, looked on approvingly as Maxis signed the deal to become Huawei's latest 5G customer. "I am pleased to see Maxis and Huawei taking advantage of this environment and supporting the growth of Malaysia's digital economy," he beamed.

Despite the best sabotage efforts of Pompeo and Ross, the US campaign to exclude Huawei and ZTE from 5G markets outside China is failing. At the last reckoning, before the Maxis deal was announced, Huawei boasted 54 5G contracts and a presence in two thirds of the world's commercial 5G networks. Some 200,000 5G modules have been shipped. This year, Huawei expects to produce 600,000 mobile basestations altogether, according to founder Ren Zhengfei. In 2020, despite a US ban on its purchase of US components, that figure will hit 1.5 million, he insists.

Most service providers have sided with Huawei, and authorities have shown little willingness to oppose them. Its 5G technology trumps that of other vendors, operators have told Light Reading, and replacing it would be costly and time-consuming. That could delay the rollout of 5G services, they say, and make them more dependent on other huge suppliers. While Huawei's critics take issue with these claims, the operators' warnings have already persuaded UK authorities -- under more US pressure than most -- to postpone any decision about Huawei and ZTE.

In the meantime, Huawei products are already supporting "live" communications in the UK's 5G networks. Several other European countries have also launched 5G services based on Huawei's technology. As operators race to secure 5G customers, Huawei's presence is quickly growing. Using radio equipment from both Sweden's Ericsson and Huawei, Vodafone UK expects to support 5G services in 19 cities by the end of the year, up from just seven when it launched services in July. If Huawei's equipment really is a conduit for Chinese spies -- as US authorities have long maintained -- then it already looks too late. Trump is still fighting on the beaches when Huawei is in the fields and the streets. 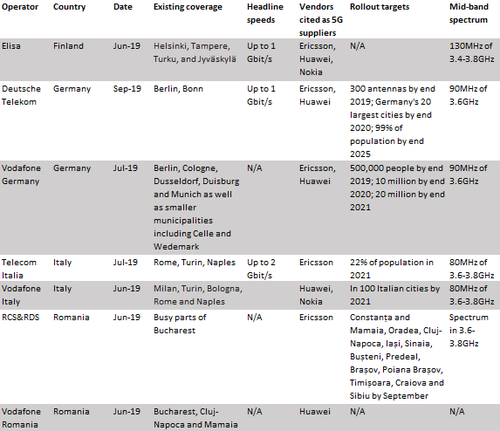 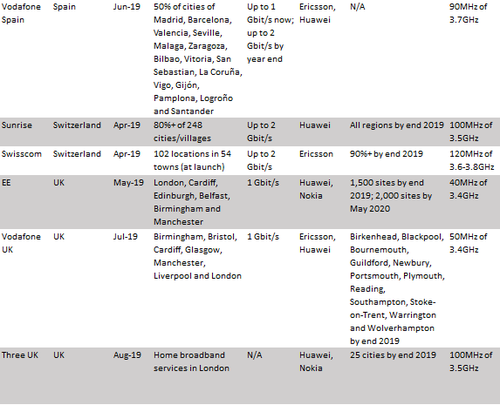 From a US perspective, the success stories can be counted on the fingers of one hand. Australia swiftly bowed to US pressure and banned Huawei and ZTE from its 5G market last year. Nearby New Zealand warned Spark off using Huawei as a 5G supplier last November. Chinese vendors also face restrictions in Japan and Taiwan. Most recently, Poland has reportedly signed a joint declaration with the US aimed at keeping Huawei out of its network infrastructure, although it does not specifically name the Chinese company.

In addition, a few operators have decided to limit the role of Huawei and ZTE, perhaps in consultation with security watchdogs. In the UK, BT, Vodafone and Three say will not use Chinese products in the "core," the intelligent part of the network. BT is now removing Huawei from the core of the EE mobile network it bought in 2016. Orange plans to exclude Huawei from the 5G network it builds in France. The network deal that French rival Iliad recently struck with Finland's Nokia suggests other French telcos may also avoid Huawei.

Before Pompeo piped up this week, Italy's government had approved special powers allowing it to intervene in deals between telcos and their network vendors, according to Reuters. It is already said to have imposed requirements on Vodafone and Wind Tre, two operators building 5G networks, as well as Huawei. But the details are unknown. Vodafone is reportedly using Huawei and Nokia as network suppliers, and Wind Tre built its mobile network with support from Ericsson and ZTE. It now plans to roll out 5G in partnership with broadband player Fastweb, which told Light Reading in September that Huawei is one of several vendors in the running for contracts, alongside Ericsson, Samsung and ZTE.

Yet resistance has barely slowed the Chinese 5G juggernaut, and some countries refuse to be cowed by the US. The standout example in recent weeks is Norway, which in late September told Reuters it had no plans to block Huawei. "We have a good dialogue with the companies on security, and then it is up to the companies themselves to choose suppliers," said Nikolai Astrup, the head of the government's digital strategy, according to that report. "We haven't got any bans against any suppliers in Norway."

It all raises questions about the likely US response. The imposition of US tariffs on European goods shows how Trump could hurt Europe's economies if he does not get his way. The UK is most at risk. As it prepares to leave the European Union (EU), it may desperately need other trading and intelligence partners. But the EU is in a strong position to retaliate: Last year, it represented the largest export market for the US, accounting for nearly a fifth of all US exports and $575 billion in trade. And in currying favor with the Americans, even the most pea-brained UK prime minister will try to avoid upsetting the Chinese.