Earth continued its slide into mass lunacy in 2019. Jair Bolsonaro, a man who once said he fathered a daughter rather than a fifth son in "a moment of weakness," became president of Brazil. Returning to the D section of his English-language thesaurus, North Korea's Kim Jong-Un called Trump a "dotard" again, months after the two leaders briefly became pals. Britain's suicidal convulsions over exiting the European Union worsened. City dwellers bought more gas-guzzling vehicles designed for Scottish mountains as the Amazon burned (the rainforest, that is, not the tech giant).

People lost it completely over technology. Discourse on social media platforms became even more like a bar brawl between mentally incapacitated drunks. The smombie (smartphone zombie) pandemic spread into new towns. Trump lamented the US lag in 6G. Far-left politicians in the UK proposed nationalizing most of BT, the telecom incumbent, and running it with at least 55,000 employees on £230 million ($303 million) a year.

Smombie in a Red Dress 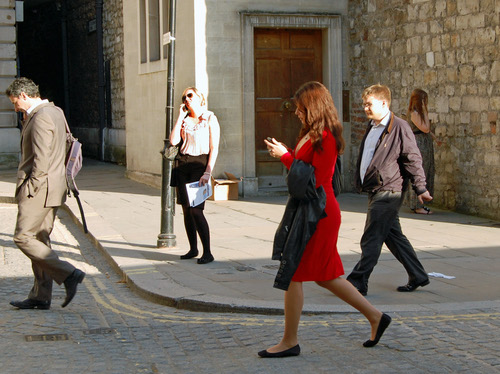 A smartphone zombie photographed moments before a potential collision.

Above all, the telecom industry continued to polish the turd that is 5G. Rarely has a technology generated so much industry hype and met with such a blasé response from the broader market. Watch your neighbor's eyes glaze over when you describe its higher speeds and lower latency. Note how he fails to share your excitement when you tell him it will provide extra capacity and reduce costs for service providers.

The industry, if not the consumer, seems to be living in 1999, another mad year for technology when IT nerds convinced company bosses that a millennium date change in computer systems would reset clocks, wipe out records and trigger the end of civilization. That year also marked the eve of 3G, which promised a mobile Internet revolution but couldn't work up the subsequent effort. Operators are now switching it off.

While 4G quietly cleaned up 3G's mess, with a helping hand from Apple and other gadget makers, 5G is neither fixing a consumer problem nor delivering a new experience. And therein lies a big issue. For all its failings, 3G sounded exciting back in the 1990s, when mobile phones were for only calls and texts and even fixed-line Internet services were young. To match that excitement, 5G would have to promise something just as revolutionary. To the average person, it doesn't.

It doesn't to some prospective business customers, either. Energy giant Shell says 4G will do for most applications, including the whizzy predictive maintenance systems it is now installing. Today, it announced the award of a major 4G contract to Tampnet, a specialist firm that operates communications networks for the energy sector. Tampnet will provide 4G services for all of Shell's oil and gas operations in the Gulf of Mexico, including the "high-speed, low-latency" connectivity Shell needs for its drillships. "We are interested in 5G, but we will not be a driving force behind it," said Johan Krebbers, Shell's IT chief technology officer, at a recent industry event.

Despite all this, policymakers now sound as intoxicated as the telecom industry. Governments everywhere have bought into the story that 5G is the most important invention since a few ancient Greeks realized a circular object on an axle would be great for transport. Suddenly, there is a 5G "race" whose winners will inherit the planet -- shortly before some of it disappears under rising seas. 5G even figures in the trade war between China and the US: Trump's lieutenants are fighting Huawei -- a Chinese network equipment maker that is now the world's biggest -- because they claim its 5G products could be used to cripple Western infrastructure at China's behest.

As unexciting as it sounds, 5G will be ubiquitous a decade from now, with billions of users. Most urban consumers will be steered down the 5G path by service providers marketing low prices and attractive handsets as they switch off older network technologies. Most businesses will adopt it for similar reasons. In this environment, 5G will gradually replace 4G in machine-based connectivity, helping to make factories, mines and offshore oil rigs more productive and secure.

What 5G probably won't do is reinvigorate the telecom industry. In saturated and competitive countries such as the UK, 5G services are already priced at 4G levels. The machines (or "Internet of Things") sector is growing but offers little in revenues from pure connectivity. As for the equipment market, the outlook is for modest growth as operators pool resources, gradually introduce new 5G gear and take advantage of software upgrades whenever possible. Huawei prefers artificial intelligence as a growth story, while Finland's Nokia thinks flogging communications products outside the telecom sector is its best bet.

If a network technology exists for seven to ten years before its successor arrives, then 5G seems unlikely to power self-driving cars or allow surgeons to operate on patients from thousands of miles away. It probably won't be used to make holographic calls from the living room. It might get an outing in virtual and augmented reality, especially if there is no end to Generation Z's gaming addiction. For the wackier services, the world may have to wait for 6G.

Cloud 4G 12/18/2019 | 11:50:36 PM
5G Had to be Hyped Because the improvements are much more about long-term and extending the platform to use much higher frequency bands and types of service.  The majority of markets, including the consumer markets, only need 5G so that a higher degree of head-room for growth will be supported.

To be fair, there are new applications entering into use including better interactive voice recognition and control, multi-user video conferencing and gaming that can gain from 5G.  However, the applications from Google, Facebook and others now use 4G. Some need new headsets, phones and home devices.  In other words, that is almost business as usual.. except th icon says 5G.

The industry has to hype 5G because unlike 3G and 4G the market is not rushing into the mobile shop to get hands on the newest decvices so that the video will stop being a pain in the keester and other apps will work.  Most apps now work and we switch between them with ease... as our brains turn into mush from having phone-app 5-20 second attention spans.

James_B_Crawshaw 12/11/2019 | 5:12:27 AM
Wheely? I think 1G wheel for transport was invented by the Mesopotamians, or close neighbours. The Greeks were early adopters of 2G spoked wheels but these were probably invented in the Ural region of modern Russia.
Reply | Post Message | MESSAGES LIST | START A BOARD

All the 5G hype and exaggeration is beyond unbelievable, especially since not a single 5G standard has been approved!  What's been deployed has largely been 5G NSA- 5G NR (3GPP Release 15) for the data path with a COMPLETE LTE infrastructure for everything else, e.g. signaling/control plane, mobile packet core, network management, etc.

ITU-R WP 5D won't complete the IMT 2020 Radio Interface Technologies (RIT/SRIT) till late 2020, but that will probably be delayed pending submission of 3GPP Release 16 which will hopefully specify: ultra low latency, ultra high reliability, 5GC (5G packet core), network management, etc.  Many other hyped 5G non-radio features/functions, like network slicing, virtual RAN, virtual packet core, security, edge computing/AI, etc are to be standardized by ITU-T, but to date no implementable specs have been produced- only functional requirements and reference architectures.  That means every 5G network operator will work with its equipment and software vendors to specify those functions = no interoperability.

Yet few journalists point this out and refute the endless claims made by telcos and their vendors.

AI/ML for the 5G RAN
5G for the Internet of Things: Connecting Everything, Everywhere
Deploying mmWave to unleash 5Gs full potential
Whats in the future of 5G millimeter wave?
How to build high-performance 5G networks with vRAN?
More Blogs from Morris Lore
6G has every chance of screwing the carriers