How Viasat Keeps Its Satellites Flying After Others Crashed

Few industry executives fit the description of veteran as well as Mark Dankberg. He co-founded satellite company Viasat way back in the landline days of 1986, and has been its chairman and CEO ever since. In that 32-year period, the industry has seen the ascent and collapse of some of the most famous satellite companies of all time. Viasat has endured through it all.

Indeed, as possibly the longest-standing CEO in the telecom industry, Dankberg must have been a close-up witness to satellite's stratospheric ride through the late 1990s, when it was the most exciting thing in telecom, and its subsequent fall from grace in the early 2000s, as emerging terrestrial competition and flawed business plans drove pioneers like Globalstar, Iridium and Teledesic into bankruptcy proceedings. Now, as ViaSat Inc. (Nasdaq: VSAT) prepares to launch its next constellation of satellites, Dankberg may have cause to feel a renewed sense of optimism about satellite's prospects.

Not all satellites, though. Dankberg sounds downbeat when assessing the outlook for the broadcast segment of the market, in which Viasat does not play. "Over-the-top video is supplanting broadcast, and that is weakening demand and weighing on the satellite sector," he tells Light Reading on the sidelines of this week's VSAT & Next Generation Satellite Applications conference in London. 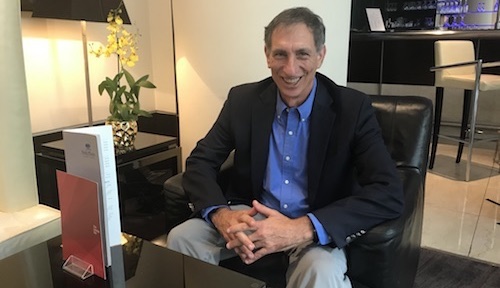 Mark Dankberg, the long-standing CEO of Viasat, says his business is growing fast in the markets for rural and in-flight connectivity.

But for companies using satellite to address broadband and other connectivity requirements, the story seems more positive. Take Viasat itself: Ten years ago, it was generating less than $600 million in annual sales; in its last fiscal year, ending in March, it was nudging $1.6 billion. And growth has continued into the first quarter of 2019, with sales up 15.5%, to about $439 million, compared with the same period last year.

So what's changed since terrestrial mobile originally burst onto the scene? How is Viasat now reporting topline growth that most cellular operators would envy, at a time when terrestrial broadband technologies seem to be everywhere?

Evidently, the likes of Viasat have had to settle for a more niche role than the one satellite's pioneers had first envisaged. But they have been helped by a wave of satellite innovation that has dramatically brought down connectivity costs for companies willing to take the investment plunge.

Burned by the experiences of Globalstar, Iridium and Teledesic, not many investors were keen. After those companies in their original guise went belly-up, satellite in the communications sector largely became a broadcasting phenomenon. "In the market for data, the main problem was that airtime was way too expensive, and that was to do with the satellites themselves and not the ground systems," says Dankberg. "There was no way you would get there by taking satellites designed for broadcast and using them for data."

Resistance to an overhaul was understandable. Satellite operators that had plowed money into expensive launches, and developed business plans based on the bandwidth and cost profile of those technologies, were unlikely to jump into similarly expensive next-generation systems that undermined their existing investments. "None of the satellite operators wanted to do it," says Dankberg. "It was risky and there was no proven economic model."

As a company whose focus had instead been on the development of ground systems, Viasat saw things differently. If it could reduce costs by a factor of 10, it would have a big impact on demand for satellite-based data services, Dankberg realized. "The data business couldn't just be a ground network playing through an existing satellite. We had to play through a data satellite. Everything had to change," he says.

Next page: We have lift-off