Apple's cloud services, including Siri, were in the spotlight at the company's annual spring product launch today, where it unveiled a new music speaker to rival Amazon Echo and added cloud services support in the upcoming new version of its iOS iPhone operating system.

Apple Inc.'s cloud-based streaming service, Apple Music, was a pillar of the news. CEO Tim Cook said the service now has 27 million paying subscribers, up from 20 million subscribers in December and 13 million a bit more than a year ago.

Impressive growth -- but that still puts it half the size of Spotify, with more than 50 million subscribers as of March.

The biggest new feature for Apple Music is new hardware -- Apple introduced the HomePod, a new speaker to compete with the Amazon Echo, for listening to Apple Music.

Philip Schiller, Apple senior vice president for worldwide marketing, said the HomePod -- shipping in December, priced at $349 -- is designed to combine the audio quality of wireless speakers like Sonos and the brains of smart speakers like the Amazon Echo.

"Just like the iPod reinvented music in our pocket, the HomePod is going to reinvent music in our homes," Schiller said.

The HomePod is less than 7" tall, covered with acoustic mesh fabric and available in black or white. 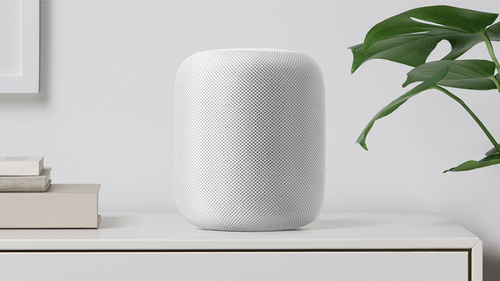 It's designed to offer great audio quality with both loud and quiet music. Onboard intelligence provides "spatial awareness," so it sounds great on a table, shelf, or corner, Schiller said.

And it's not just a speaker; the HomePod is a smart device, like the Echo. The HomePod integrates with Siri. Users can ask questions, ask the HomePod to read the news and -- with HomeKit integration -- order the HomePod to open the blinds, adjust the room temperature and do it from anywhere in the world over an iPhone app.

iOS 11
Apple's biggest cloud endpoint -- and its biggest product -- is the iPhone. Apple on Monday unveiled iOS 11, the new version of the phone's operating system, which is available immediately in developer preview and to all users as a free upgrade in the fall.

Apple upgraded Apple Pay to support person-to-person payments and the ability to send payment as part of the Messages app.

Siri got upgrades too: a new voice and a new visual interface.

A new translation feature allows users to speak a sentence in one language and have Siri's voice translate it to another. It supports English, Chinese, French, German, Italian and Spanish, with more to come.

Siri will learn user interests to fine tune information offered. For example, if a user searches on Reykjavic in Safari, Siri will in the future surface news about Iceland in headlines and suggest Icelandic place names in the keyboard suggestions in Messages, Federighi said.

Similarly, if a user gets a message from someone asking for money, Siri will suggest the Apple Pay app with the amount automatically entered as a suggestion.

Apple Maps also gets an update, including detailed floor plans of malls and large airports in large cities.

Apple refreshed the iMac line, adding high-end processor and graphics to make them capable of being used for virtual reality content creation.

Lauren Ridge, a programmer with Epic Games, did an impressive demonstration, walking around a virtual landscape on another world, joined by Darth Vader and a couple of spaceships from the Star Wars universe. She used hand gestures to manipulate virtual objects, and even make herself giant-sized to better manage creation. 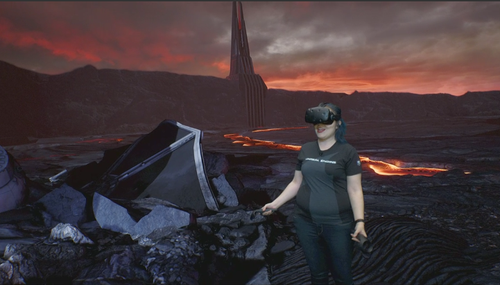 As part of the iOS upgrade, Apple introduced ARKit, to allow developers to build augmented reality apps for the iPhone and iPad.

Alasdair Coull, AR and VR supervisor for AR production studio Wingnut AR, came on stage to demonstrate an augmented reality scene that appeared to play out on a real-life tabletop. Viewed through an iPad, the tabletop seemed to be transformed into a frontier outpost on an alien planet, which was attacked by spaceships.

AR battle on a tabletop.

Wingnut AR was founded by Peter Jackson, producer of the Lord of the Rings movies.

WatchOS 4.0
The Apple Watch is another major hardware endpoint for Apple cloud services. The company showed off the new version of the watch operating system. It includes new watch faces, powered by Siri, to show relevant information as it's needed.

"Throughout the day, whenever you raise your wrist, you'll see information relevant to you," said Kevin Lynch, Apple vice president of technology.

The Watch will be able to connect wirelesssly to gym equipment from manufacturers representing 80% of the equipment in gyms today, including StairMaster, Schwynn, LifeFitness, Matrix, Cybex and more. Users can connect just by tapping the watch to the equipment.

WatchOS 4 improves pairing with Apple Music and AirPods, improving the ability for users to sync music to their watches and leave their iPhones at home when they exercise. WatchOS 4 adds support for multiple playlists.

Growth engine
Apple's services business -- that is, cloud services -- are a fast-growing part of Apple's business. Services include the App Store, Apple Music, Apple Pay and iCloud. In the most recent financial quarter, ending April 1, services revenue was up a healthy 17.5%, to $7.04 billion, Reuters reported.

The company reported a surprise fall in iPhone sales for its second quarter, ending last month, possibly indicative of customers waiting for a 10th anniversary edition of the company's most important product later this year. Apple sold 50.76 million iPhones in its fiscal second quarter ending April 1, down from 51.19 million a year earlier. But iPhone revenues were up 1.2%.

Enterprise partnerships
Enterprise vendors are partnering with Apple on cloud services. Cisco piggybacked on Apple's announcement Monday, announcing optimized support for for Apple devices on Cisco networks. Cisco previously announced a "fast lane" for business critical apps on iPhones and iPads, to give business apps priority over networks to those devices. Now it's extending that support to MacOS on the desktop.

And Cisco is broadening integration of Cisco Spark and Cisco WebEx meetings with iOS and Safari. Users will be able to tap to join meetings from the iOS calendar or meeting notifications; share screens from iOS devices; and join on Safari with full audio, video and presentation capabilities.

IBM announced a partnership with Apple on cloud computing in 2014, with Apple providing iPhones, iPads and support for those devices, while IBM providing enterprise expertise, specifically 100 apps for vertical industries, as well as security, analytics and cloud support. (See Analytics, Security Key to Apple, IBM Tie-Up.)