SANTA CLARA, Calif. -- Cloud Foundry Summit -- There was a metaphorical empty chair at a panel about multi-cloud portability that featured Microsoft and Google pretty much agreeing on everything.

"Seems like somebody's missing," quipped moderator Frederic Lardinois, news editor for TechCrunch, on Wednesday as he surveyed panelists from Microsoft, Google and the Cloud Foundry Foundation.

The company not represented on that panel was Amazon Web Services, which has more than half of market share in public cloud, with Microsoft Corp. (Nasdaq: MSFT) and Google (Nasdaq: GOOG) in second and third place, respectively. (See Cloud Growth Spawns Worries, Mary Meeker Reports.) 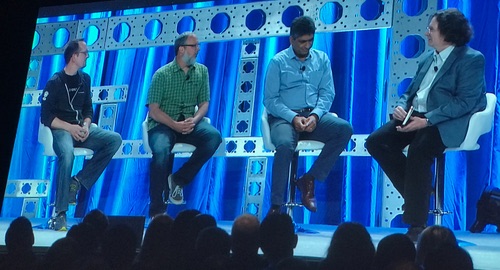 But the subject matter of that panel was making applications portable to run on multiple clouds -- a strategy that hurts Amazon as the incumbent, and helps challengers including Microsoft and Google. With most public cloud workloads running on Amazon today, which means that if cloud workloads get mobile, they'll mostly be leaving Amazon.

Cloud Foundry is about "customer choice," said Eric Johnson, Google technical lead/manager. "Cloud Foundry is a great way to abstract a lot of the difference between cloud providers," he said. "You're abstracting the complexities you don't care about."

Cloud Foundry provides a layer that standardizes capabilities that are similar across multiple cloud providers, while allowing enterprises to take advantage of capabilities that are unique to each cloud provider, Johnson said. For example, every cloud provider uses virtual machines, but deploys them differently. Bosh, a component of Cloud Foundry, handles managing virtual machines, and developers don't have to worry about that. "Just focus on developing your applications," he said.

Microsoft supports Cloud Foundry by running it on both Azure and on Azure Stack, its platform for running Azure workloads on enterprise premises, due to ship later this year. (See Microsoft Wants Azure to Blur the Enterprise Edge.)

Supporting customer choice is a big change for Microsoft, which has historically pursued a strategy of lock-in.

The reason for the change: Customers demand it, KY Srinivasan, Microsoft partner architect, said. "Microsoft is all about choice these days," he said.

Another big change for Microsoft: adopting open source. Again, that's customer-driven, Srinivasan said. "If customers are running the open source stack, we want to make sure our platform supports it as well as we can," he said. Microsoft also sees value in the open source business model.

As part of that transition to open source, Microsoft this week announced it's joining the Cloud Foundry Foundation as a gold member. (See Microsoft Goes for Cloud Foundry Gold.)

While embracing choice and open source is relatively new for Microsoft, historically Microsoft has always been about making the complex simple, Srinivasan said. "My grandmother can read email because of Microsoft offerings." And that's Microsoft's approach to cloud as well.

Keep up with the latest enterprise cloud news and insights. Sign up for the weekly Enterprise Cloud News newsletter.
Like what we have to say? Click here to sign up to our daily newsletter
COMMENTS
Newest First | Oldest First | Threaded View
Add Comment

kq4ym 6/26/2017 | 9:23:37 AM
Re: Microsoft With Amazon still with half the market share it's probably not to be expected they'll join with Microsoft and Google in the festivities. It will be interesting to see if and when that leading market share deteriorates over the next few years as the competition heats up.
Reply | Post Message | MESSAGES LIST | START A BOARD

I expect they'll change back to loving lock-in if and when it makes business sense.
Reply | Post Message | MESSAGES LIST | START A BOARD

danielcawrey 6/18/2017 | 1:38:38 PM
Microsoft Interesting to see Microsoft turn the tables here. They are usually the one we talk about when it comes to lock-in.

Amazon obviously is happy to be in its position; there's no point in them talking.
Reply | Post Message | MESSAGES LIST | START A BOARD
EDUCATIONAL RESOURCES