A report released this month finds that 97.4% of New York is considered "served" by high-speed Internet access (at least 100/20 Mbit/s) from two providers or more. But a closer look at the data reveals deeper disparities, including a lack of competition and affordable options in various regions of the state.

The state commissioned Rochester, New York-based ECC Technologies to produce the broadband assessment report, which examines access in New York State and where access and affordability gaps are most prevalent. While the study found that 97.4%, 0.1% and 2.5% of locations in the state are served, underserved and unserved, respectively, it also showed how that data skews deeper gaps. 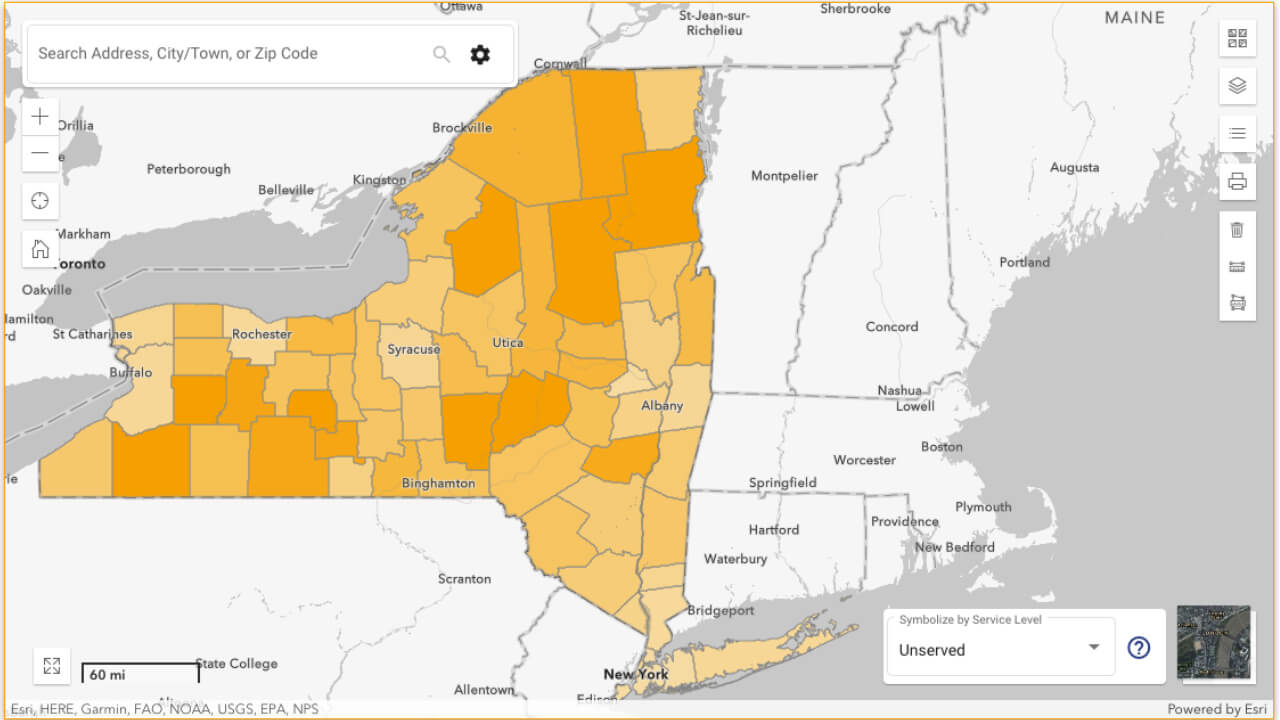 The lack of competition impacts lower-income communities in New York the most, found ECC.

"In general, the 16 counties in the lowest 25th income percentile, on average, face the highest prices and are provided with the lowest speeds. The 30 counties with incomes in the middle percentiles receive slightly lower prices, and significantly greater speeds," says the report.

Meanwhile, it adds that "the 16 counties with the highest incomes, those in the top 25th percentile, benefit from the lowest prices and the greatest speeds. Notably, the number of ISPs, on average, increase as county-level incomes increase."

Those statistics contrast somewhat with findings released last week by industry group ACA Connects showing that the growth of ISP competition has eliminated the need for regulation that would make service more affordable. However, some of ACA's argument hinges on the multibillion dollar federal commitment to building out affordable broadband in the coming years.

According to ECC's report, the company's data improves upon existing FCC data in a few key ways.

"The interactive Map improves upon previously produced FCC maps that used a classification methodology that relied on ISP-provided data at the census-block level," says the report.

Instead, the new map incorporates "additional data sources, such as the [New York State Street and Address Maintenance (SAM)] program database, field inventories, and consumer input, to produce a more granular depiction of broadband availability, technology types, and pricing in New York," it adds. "These efforts mark a major step forward in the mapping of broadband availability."

Some caveats apply regarding data collection. In terms of consumer input, for example, of New York's 19.5 million residents, ECC Technologies reported that "over 27,000 New Yorkers responded to the survey from every corner of the State."

As Joe Starks, president of ECC, told us last year, "The infrastructure studies that we're doing are not being done in cities, because we already know that the cities have infrastructure on most streets ... Having said that, there's some areas in Brooklyn and Manhattan that are missing, but it would take us years and years and years to get that, so that's not part of this project."

Indeed, plugging in my own Manhattan address, the map shows my building as serviced by three high-speed providers (Verizon Fios, Spectrum and Starry) but only two (Verizon and Spectrum) deliver here.

New York, like every other state and territory, will find out what the federal government's data says about its broadband access when the FCC releases its updated maps later this year. The state will then be able to use its own map to contest the FCC's data if there are inconsistencies.

That matters, as the FCC map will determine how much money New York gets from the Broadband, Equity, Access and Deployment (BEAD) program beyond its initial $100 million.

According to an estimate from Broadband.Money, New York could receive $672.8 million-$756.4 million through the infrastructure law's broadband programs.

The state is counting on it. Earlier this year, under Governor Kathy Hochul, New York passed a $1.4 billion plan in the state budget to deliver affordable broadband access to every New Yorker. According to the governor's office, the plan, called ConnectAll, will be funded through "a State investment of up to $300 million, boosted by $345 million in federal funding as well as hundreds of millions of dollars in additional federal funds from the [Infrastructure Investment and Jobs Act] IIJA."