Microsoft's fiscal Q4 (ended June 30) was pretty much a repeat performance of the previous quarter.

Lockdown measures translated into surges in cloud usage and demand. Turnover at the Intelligent Cloud segment jumped 17%, year-on-year, to US$13.4 billion.

Microsoft's Azure cloud computing platform, which sits in the "server products and cloud services" sub-category of Intelligent Cloud, posted another head-turning jump in sales of 47%. 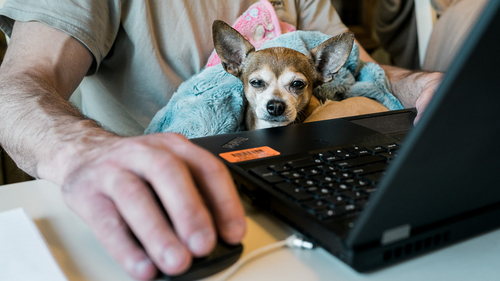 Pandemic dogs: Coronavirus has helped Microsoft's cloud businesses to surge, as the world continues to work from home. (Source: Allie on Unsplash)

True, this was slower than the 59% year-on-year growth Azure drummed up the previous quarter, but was nonetheless an impressive showing.

That accounts for more than a third of annual group revenue.

In Q4, solid cloud growth helped boost group sales by 13%, year-on-year, to a shade over $38 billion. It beat by some margin analyst consensus, which pegged Q4 turnover at $36.5 billion.

Q4 was not without its downsides, however.

Moving on down
Drags on sales included a slowdown in Office and Windows OEM-Pro uptake, particularly from small and midsized businesses.

LinkedIn was also negatively impacted by the weak job market, and reductions in advertising spend, as was Microsoft's search business.

For the current fiscal quarter, Microsoft expects $35.61 billion in revenue, which is around 8% growth.

The forecast was lower than the $35.91 billion analyst consensus polled by Refinitiv, according to CNBC, with shares down as much as 3% in extended trading on Wednesday.