Even the best ingredients can produce a Technicolor disaster of a paella in the hands of a bad chef. Franz Seiser worries that his 5G core network might turn into a similar mess without the requisite in-house expertise. "The challenge is to figure out the right ingredients but also combine them in the right way," said the vice president of core network development for Deutsche Telekom. "You can have the best ingredients and not know how to cook properly."

The ingredients, in this case, are the open source technologies that Germany's biggest operator is eyeing as it begins work on a cloud-native 5G core. After a few blunders on pan-net, its project to build a single cloud-based network serving nearly all its European markets, Deutsche Telekom is still in the early stages of its cloud journey. But it has a clear destination in mind. Beyond 2020, it aims to have a "standalone" 5G core built using web tools such as Kubernetes. In the same timeframe, around 900 German sites could be turned into "cloudlets," Deutsche Telekom's term for its edge data centers. Open source technologies are integral to the cloudification plans.

The rationale was spelled out several times here in Madrid, where Seiser drew on the paella analogy to emphasize his concerns. In a nutshell, Deutsche Telekom, along with most other Tier 1 operators, wants greater control of its own destiny and less dependence on giant vendors that have grown fat off proprietary technologies. Open source should provide a much-needed spur to competition and innovation. Cloudification, he hopes, will reduce costs (eventually) as well as time to market.

The Good & the Bad of Paella 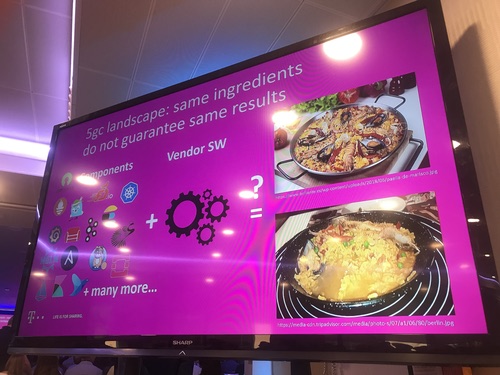 Deutsche Telekom has plenty of ingredients available, but can it produce a palatable 5G core?

But the transition is a huge challenge, as Deutsche Telekom found out the hard way on pan-net. "We had to revise the plans and take smaller steps," he said. "A big step is a nice ambition, but it doesn't always work out." Only in the last year has Deutsche Telekom started to move network functions into a cloud environment, and these will not support commercial services until 2020. Internal culture and mindset have been the chief barriers, according to Seiser: Most telco employees are not used to the modus operandi the cloud demands.

Despite slower-than-expected progress on pan-net, Deutsche Telekom is advancing. There is already more automation in the business, although Seiser acknowledges a "big gap" must be filled in orchestration. Four central offices in the cities of Berlin, Frankfurt, Hamburg and Munich have been turned into cloudlets, creating new service opportunities, and another in Dusseldorf will soon join the list. A Deutsche Telekom-backed start-up called MobiledgeX is developing the software to support new edge applications.

Yet the timescale on the core network side remains ambitious. Because the software Deutsche Telekom runs on the cloud is still not optimized, that software is typically more expensive than traditional stuff. In the early days of virtualization, Deutsche Telekom started investing in virtual machines, software versions of original network products, that have brought limited benefits. These are now giving way to microservices, which break those functions into more lightweight components, but introduce operational complexity. "That is the price you pay," said Seiser. "You need to come up with a proper automation system. If that is under control, there is a chance to get to lower operating costs."

Open source only complicates the picture and starts Seiser thinking about dodgy paella. Desperate to avoid cooking an unpalatable meal, Deutsche Telekom has been assessing the ability of several suppliers to combine open source technologies and build a cloud-native 5G core. "The differences were rather big," said Seiser. "Some were close to and others were quite far away from our definition of cloud-native."

Nevertheless, it has picked one of the vendors for a trial. Without disclosing its identity, Seiser said the company is now running a mixture of virtual machines and Kubernetes-based microservices. His message for the industry so far? "Don't even think about doing it manually," he said. "You need automation right from the beginning." Integrating software into the cloud environment still takes one to two weeks, rather than a few hours, he also complained. And end-to-end monitoring is much harder with microservices than in the world of virtual machines.

Seiser admits he does not yet have a clear view about how to manage complexity as services evolve. But he thinks telcos need to find a common approach to that issue. "If we don't, the software guys will charge like crazy," he said. "For every problem there are five tools on open source." Right now, Deutsche Telekom is working through an industry group (yes, another one of those) called the Common NFVi Telco Taskforce to (hopefully) arrive at a de facto agreement on what the infrastructure should look like. It published its first reference model this week.

The question is whether suppliers are getting enough clarity from Deutsche Telekom and other telcos on the target platform they should build applications for, says Gabriel Brown, a principal analyst with Heavy Reading. "We are trying," said Seiser. "The cloud platforms are still under development we are now going forward to containers and the thing starts more or less again." Avoiding a paella foul-up will not be easy.