Optical components specialist Acacia likely wishes that Monday, April 16, 2018, never happened. That's because yesterday's announcement from the US Commerce Department that domestic firms can not sell components to Chinese systems and mobile handset vendor ZTE for seven years, because of sanctions violations, wiped a whopping 36% off its share price, which dipped from $40.03 to $25.63. (See US Govt. Bans Domestic Component Sales to ZTE.)

Tuesday has brought only a slight recovery to $26.10. 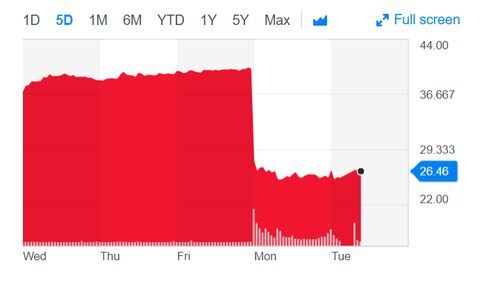 So the Commerce Dept.'s decision is a brutal blow.

Other components firms also sell to ZTE Corp. (Shenzhen: 000063; Hong Kong: 0763), mainly Oclaro (its stock dipped by 15% Monday but has gained 5% today), Lumentum (which is acquiring Oclaro) and Finisar, but none have been nearly as reliant on the Chinese vendor.

Acacia Communications, Inc. (NASDAQ:ACIA), a leading provider of high-speed coherent optical interconnect products, today announced that it is aware of the recent announcement that the U.S. Department of Commerce by order, effective immediately, is banning American companies from selling, exporting or re-exporting components, software and technology to Chinese telecom equipment maker ZTE Corporation as a result of ZTE's actions in connection with a previous settlement regarding sanctions violations. Acacia is taking steps to suspend affected transactions and is assessing the impact of these developments on Acacia.

So what's next for Acacia?

Mike Genovese, a long-time optical sector analyst from MKM Partners, notes that this is "a major negative" for Acacia and that the company will likely switch its focus to the data center interconnect (DCI) market, which is still as hot as molten lava. "In many ways, ZTE was the ideal customer for Acacia since it was the largest global Optical systems vendor (#3 in market share) that did not have developed in-house DSP capabilities," noted Genovese in a research note. "With the loss of ZTE as a customer, we expect Acacia to focus much more intently on its Hyper Scale DCI opportunities since its Telecom OEM opportunities are now greatly reduced."

George Notter at Jefferies offers a slither of hope for Acacia, noting that there's a decent chance that the seven-year term of the ban might be reduced. "We note that the newly-imposed, 7-year ban is an incredibly harsh punishment," states Notter in a research note. "It may be possible that the order serves as a starting point for further negotiations between the US government and ZTE. Lastly, it's obvious that there may be additional diplomatic involvement from both China and the US on this matter."

Notter also notes that, even in the short term, Ciena is likely to benefit from the negative impact the band will have on ZTE selling power. Ciena's share price has gained 3.4% since the start of the week and currently trades at $26.49.

For Acacia then, it's currently a case of wait and see: It will hope for some sort of reprieve but given the current state of relations between the US and China, it should prepare for the worst and chart a new strategic course that embeds it further with the likes of ADVA and Coriant and helps it find new customers in the data center interconnect market.