Taking deeper aim at video cord-cutters and its broadband-only customer base, Charter Communications is nearing the launch of Spectrum TV Essentials, an OTT-delivered package of more than 60 channels that won't include local broadcast TV networks and major sports channels like ESPN.

Charter said the new offering, to debut by the end of March and sell for $14.99 per month (plus tax), will be available within the MSO's service footprint. Thus it falls short of a national OTT offering and, therefore, is not a declaration of war against other US cable operators.

Charter also announced it plans to add a cloud DVR service for the Spectrum TV App, and that, starting this May, it also will offer a slate content under the "Spectrum Originals" banner to all Spectrum TV Essential customers. 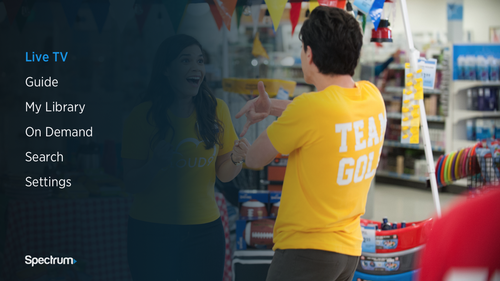 Charter's new OTT offering for broadband-only subs will be powered by the MSO's Spectrum TV App for various mobile and TV-connected streaming devices. Pictured is a screencap of the app for Roku players.

Charter's newest offering is certainly a move to address a growing cord-cutting trend, one no doubt designed to discourage its broadband subs from defecting to various competitive OTT-TV services. Charter lost 36,000 residential video subs in Q4 2018, ending with 16.1 million, and added 289,000 residential broadband subs, for a grand total of 23.62 million.

Spectrum TV Essentials appears to be the most directly competitive with Philo, which is backed by Viacom, AMC and Discovery, and offers a sports-free, entertainment-focused OTT-TV package, plus a cloud DVR capability, starting at $16 per month.

In addition to the channel lineup, which includes networks from Viacom, Discovery Networks, A&E Networks, AMC Networks and Hallmark, Spectrum TV Essentials also will give subscribers access to a library of VoD titles from those programming partners.

The MSO is interested in selling video packages that appeal to different segments of the consumer base, and this new entrant is expected to be especially attractive to consumers who may already use over-the-air TV antennas to watch local broadcast stations and are looking to supplement with a selection of popular, entertainment programming, a Charter official noted.

Jeff Baumgartner 2/20/2019 | 3:48:43 PM
Channel lineup Here's the list of networks to be offered on Spectrum TV Essentials out of the chute: