Paramount+, the super-sized streaming service from ViacomCBS, will take a two-pronged approach to pricing with an ad-free "premium" tier along with a cheaper, ad-supported "base" offering.

By comparison, CBS All Access currently costs $5.99 per month with ads, and $9.99 without ads. So, the only initial price change is for the base version of Paramount+ – $1 less than what the ad-supported version of CBS All Access goes for today.

ViacomCBS is forecasting 65 million to 75 million subs globally for Paramount+ by 2024, expecting total streaming revenues from all OTT services to pull in about $7 billion by then.

As the general content slate goes, the premium version of Paramount+ will include more live sports, access to CBS local stations and the live CBS national feed. 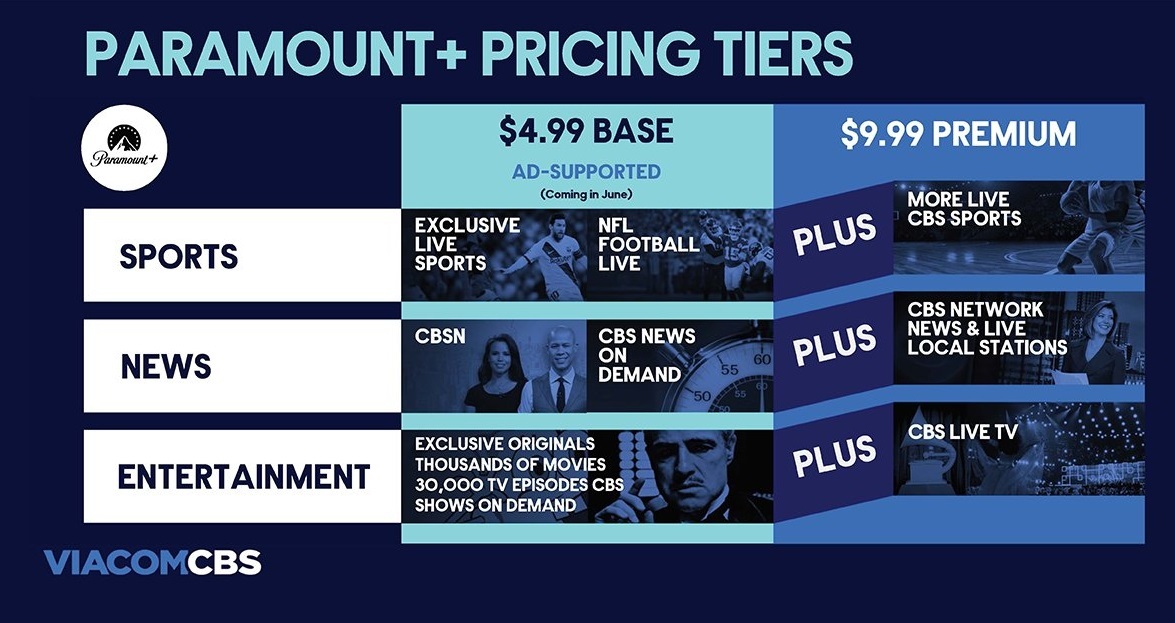 Click here for a larger version of this image.
(Source: ViacomCBS)

ViacomCBS reasoned that it will have more flexibility about bundling and distribution deals by keeping local CBS channels out of the base tier.

Paramount+ will debut with 30,000 TV shows and about 2,500 movies, along with plans to introduce 36 original series in 2021 that include a mix of some reboots, prequels and remakes. News and live sports will also factor in heavily alongside general entertainment fare. Following a launch in the US and Canada on March 4, Paramount+ will debut in the Nordics on March 25 and in Australia in mid-2021.

Some examples of the original fare on tap include Star Trek: Strange New Worlds, a series about the maiden voyages of the Starship Enterprise under Captain Christopher Pike, and Star Trek: Prodigy, an animated show for children. Also on slate is a prequel/spinoff series for Yellowstone currently titled 6666 and a revival of Frasier. Halo, a show based on the computer game, is billed as a "defining show" for the new streaming service.

ViacomCBS will also offer a selection of new Paramount movies on the Paramount+ streaming service within 30 to 45 days of their theatrical release. While that does narrow the distribution window, it's not anywhere near the simultaneous home/theatrical window WarnerMedia is using for its 2021 movie slate.

Tom Ryan, president and CEO of streaming at ViacomCBS, said Pluto TV will serve as part of a "super funnel" that leads viewers to ViacomCBS's pay and premium subscription services. Pluto TV recently launched Showtime Selects, a free channel featuring Showtime programming, and it is expected to launch a similar channel for Paramount+.

Despite its amped up streaming play, ViacomCBS expects to stay in the traditional linear TV market for the foreseeable future.

Being all-in on linear or all-in on streaming is a "false choice," Shari Redstone, chair of ViacomCBS, said. "We're about both linear and streaming  We will live in this hybrid environment for a while."

Still, some analysts wonder if the focus on Paramount+, and packing a bunch of new premium content into the streaming service, will create friction when ViacomCBS tries to strike new deals with pay-TV providers. Notably, Comcast has already integrated CBS All Access (and soon, Paramount+) on X1, its pay-TV platform, as well as Flex, Comcast's streaming service for broadband-only customers.

Imagine you're an MVPD (cable/satellite) who pays a lot of money for broadcast/cable network programming or a TV station affiliate group that pays a lot for content on linear TV -- WHAT are you thinking as every single legacy media company puts all their best content on streaming pic.twitter.com/AoCXtasPDe

ViacomCBS announced Q4 results in tandem with the streaming strategy dog and pony show. The company's global streaming sub base ended 2020 with 30 million, up 56% year-over-year, and it saw ad revenues more than double in the quarter.